This is one of the conclusions from a recent article published in Joule from our e-Refinery colleagues Wilson Smith, Thomas Burdyny, David Vermaas and Hans Geerlings titled “Pathways to Industrial-Scale Fuel Out of Thin Air from CO2 Electrolysis”. In this work, the authors put into context what the industrial-scale production of chemicals from ambient CO2 using CO2 electrolysis means in terms of future required operating conditions, and the device and catalyst scales that will be needed for the technology to assume its role in our global energy system.

A successful transition of our global energy system will require changes to our society and industry. One of these is the production of electricity from renewable energy sources which can be directly used today, and in our increasingly electrified future infrastructure. The generated green electricity is also foreseen to be essential in ‘Power-to-X’ technologies, where ambient molecules such as H2O, CO2 and N2 are converted into dense-energy carriers.

Here we provide an example of the combined technologies needed to make Power-to-X into an industry capable of influencing the global energy system (~TW). Despite a large amount of research on each individual process, little effort has gone into learning how these units will be combined together into a larger process for making carbon-neutral fuels and feedstocks. Using CO2 electrolyzers as a central technology in the production of green methanol, we discuss the integration of direct CO2 air capture with CO2/H2O electrolyzers and a traditional methanol synthesis step. The resulting analysis provides tangible scales for CO2 electrolyzers at an early research stage, and perspectives on a future industry powered by dilute solar energy resources. 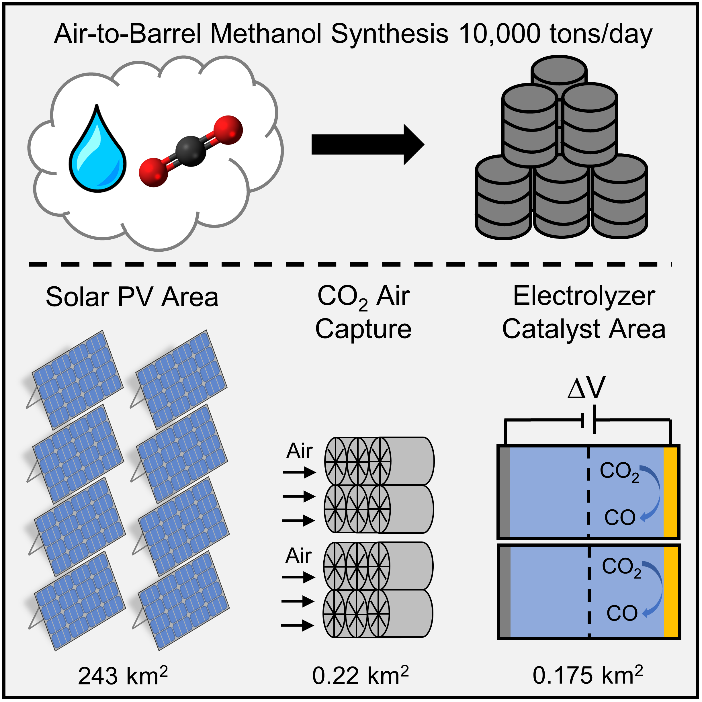 Requirements for a 10,000 tons/day methanol plant

By visualizing an endgame for CO2 electrolyzers, we also determine that extremely-large areas of solar panels and CO2 air capture units will be needed to run a future green methanol plant that is the same size as our current infrastructure. In fact, a 10,000 tons/day methanol plant will require at least 243 km2 of solar panels, and >0.22 km2 of CO2 air capture units, indicating that the current mega-plant approach used today, may not be a feasible approach in a future energy system.