GUSTO, NASA's stratospheric balloon observatory, will bring the Dutch multi-pixel camera system of SRON and TU Delft to the edge of space. It will perform a large-scale observation of the spectral lines from ionized atoms between the stars of the Milky Way. As an extra hardware contribution, SRON-TU Delft delivers a Fourier phase grating. The technique behind it is now published in Optics Express. 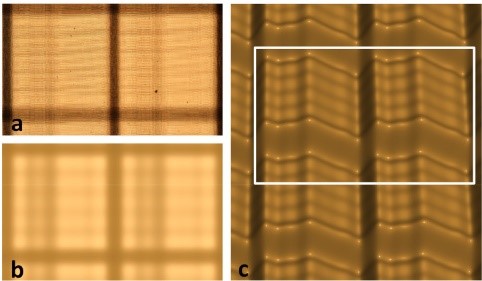 An asymmetric-profile phase grating dedicated for GUSTO. (a) and (b): Optical micrograph and its simulated image of two grating unit cells. (c): Simulated 3D view of the imaged area shown in a.

To investigate atoms and molecules in the interstellar medium, astronomers look at their fingerprints in a specific type of infrared light: terahertz radiation. GUSTO is equipped with a camera system based on so-called heterodyne receivers to pick up this radiation. The receivers mix a terahertz signal from space with their own signal from a local oscillator to down-convert it to a microwave frequency, making it easier to handle for scientists. This approach allows them to capture the atomic and molecular fingerprints at a high spectral resolution of at least one million. It requires a multi-pixel detector, which needs an oscillator with multiple beams of exactly the same frequency and power.

Behnam Mirzaei, a researcher in the Optics Research Group and an instrument scientist at SRON, has developed a Fourier phase grating to multiplex a single beam from a quantum cascade laser to eight at 4.7 THz. A difficulty is that GUSTO demands 2x4 beams with strict requirements on their angular distances and the uniformity of their power. Moreover, the incoming beam size from the laser is smaller than usual.

To meet these requirements, Behnam has applied a new concept based on an asymmetric-profile. The asymmetric grating breaks the light up into multiple beams travelling in different directions, which are not equally distributed around the reflected direction if the phase grating would be replaced by a flat mirror. In this way the grating makes use of the small size of the incoming beam to create the required angular distance between the multiple beams. In contrast, a conventional symmetric grating, if it has to use a small beam, will create multiple beams with too large angular distance. So it wouldn't match GUSTO's optical system. The technique is now published in the journal Optics Express.