This project is part of a larger ERC project in which quantitative understanding of the hydrodynamics of gas-fluidised systems of non-spherical granular particles will be achieved through a combination of modelling and experimentation, with an emphasis on modelling. The models range from detailed models of particle and fluid interactions to more coarse-grained models, which use correlations obtained from the fundamental models, for large-scale applications. The models are validated experimentally, using state-of-the-art non-invasive techniques such as particle image velocimetry, digital image analysis, and magnetic particle tracking.

In this subproject, the lattice Boltzmann method (LBM) is used as a mesoscopic model for directly simulating fluid flow around stationary/moving non-spherical particles at high Reynolds numbers. During this modelling, the gas flow is solved on a grid much smaller than the particles sizes and the correlations between particles alignment and drag/lift/torque forces are calculated. However in the LBM simulations, developing accurate and efficient boundary condition for curved solid boundaries is very crucial as it may influence the stability and the accuracy of the modeling. Most of the wall boundary conditions available in the literature proposed for the curved boundaries result in mass leakage. The mass leakage is pronounced for high Re fluid flow around a large number of particles in a periodic domain. Hence, we are trying to develop and implement an accurate boundary condition for high Re fluidized bed system that results in accurate and reliable results when calculating drag/lift/torque forces.

Figure 1.High Re gas flow around a large number of non-spherical particles in a fully periodic domain 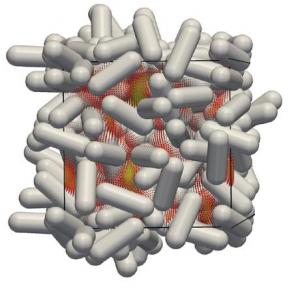