Coal Mining in the Netherlands

This website provides a detailed historic overview of the former coal mines that dominated the South Limburg area in the Netherlands from the beginning of the 20th century to the midst of the 1970's .The mining area was located in the south of the Netherlands, bordering Germany and Belgium.

Click here for the production statistics of the Limburg mines.

Only in recent years has the mining history in Limburg gathered new attention, not at the least because of the many websites which brought the history of South-Limburg in the Dutch energy supply under attention. At december 17, 2005, exactly 40 years after the announcement of end of the Dutch coalmining industry, the Minister of Education, M. van der Hoeven started the project "De Mijnen (The Mines)" Stichting De Mijnen, a digital platform for everything connected to the Dutch coal mines. This website, one of the first sites concerning the Dutch coalmines to appear on the internet, was launched in 2002, as a semi-TU-Delft site and a private initiative. After several updates and restylings the site became an offcial TU-Delft site in the autumn of 2007. 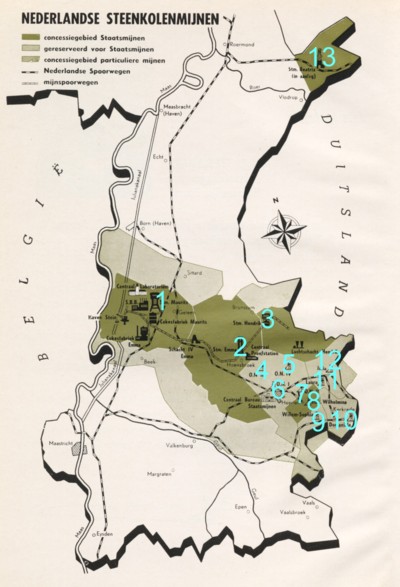 Map indicating the mining sites described in this website. Dark green areas are concessions of Dutch State Mines (DSM), whereas light green areas indicate areas reserved for the state owned mines. Intermediately colored areas are concessions of the former private mining companies. The mine sites are indicated by numbers. Click on a name in the list beside the picture for more information.

After a long time of inactivity, major revisions have been undertaken in September/October 2014.

Due to university policy, this site can now only be shown in English. The Dutch Version is offline.