Ocean eddies are abundant in the Caribbean Sea. They are predominantly anti-cyclonic, have a warm core, and can be long-lived. They are thought to impact the local ecosystem by mixing low-salinity river waters with the nutrient-rich waters that upwell along the Venezuelan and Colombian coast. Since these eddies have the potential to store heat below the surface, they may influence the evolution of passing hurricanes.

Modelling the lifecycle of Caribbean eddies

One of the most pronounced features of Caribbean anti-cyclones is that they intensify on their path westward. We use a regional model to study the causes of this westward intensification, and to unravel the interplay between the eddies, wind-driven coastal upwelling and the Orinoco and Amazon River Plumes.

This research is performed in close collaboration with the SCENES team.

Survey of a Caribbean anticyclone

In February 2018, we performed a combined hydrographic and biological survey of a Caribbean anti-cyclone. The surveyed anti-cyclone was surface intensified, with the strongest velocities in the upper 200 m of the water column. The waters at its core could be traced back to the Orinoco River plume. Below the surface, we found thermohaline staircases that originated from double diffusion processes. At the edge of the anti-cyclone, we observed flying fish in high numbers.

This research cruise is part of the NICO (Netherlands Initiative Changing Oceans) expedition coordinated by NIOZ and NWO. The biological component of the program was performed by Wageningen Marine Research. 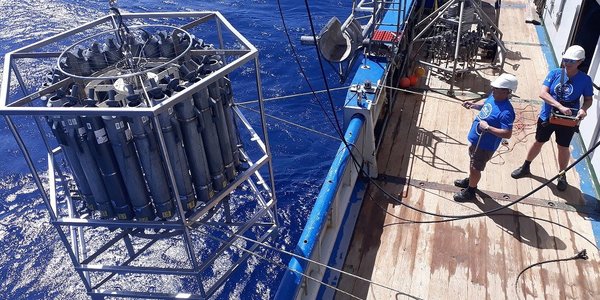 Hurricanes are fueled by the energy that is released when atmospheric water vapor condensates. A higher sea surface temperature (SST) can increase the energy available to a hurricane. However, a hurricane’s strong winds vertically mix the warmer upper ocean with colder subsurface waters, thus providing a negative feedback on the SST.

We statistically investigate the magnitude and spatial distribution of hurricane-induced SST cooling, and its relation to hurricane intensity, translation speed, and the ocean stratification.