Caroline Katsman is Associate Professor in Physical Oceanography, focusing on the large-scale ocean circulation and its role for climate.

Dr. Katsman returned to KNMI as a climate researcher in 2003. There, she further developed her specific field of expertise: the role of the ocean in the current and future climate, with an emphasis on ocean warming and future sea level change. Besides her scientific work, she advised the Dutch government on coastal defense policy strategies, based on the scenarios for regional sea level change she developed with co-workers at Utrecht University and Delft University of Technology. In 2008, she published extreme high-end scenarios for local sea level rise at the request of the “Nieuwe Delta Commissie” (a state committee installed by the Dutch government to assess the country’s flood defense strategies in light of future climate change).

In 2014, she received a personal mid-career grant (NWO-VIDI grant) to study how ocean eddies govern the response of the ocean circulation to high-latitude climate change. In that same year she became an Associate Professor in Physical Oceanography at Delft University of Technology, at the faculty of Civil Engineering and Geosciences, Environmental Fluid Mechanics section.

More information about Caroline Katsman, her research group and their focus can be found on their website. 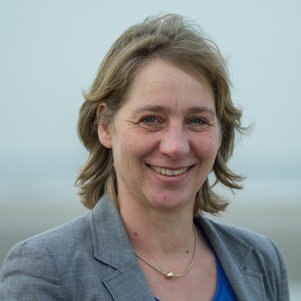 Associate Professor of Oceans and Climate

Storm at sea: the inside story