Patricia Buffon was born in Bento Gonçalves, Brazil, in 1990, where she lived on a small farm in the middle of the Atlantic Forest until 2009, when she moved to Porto Alegre to start her trajectory at Federal University of Rio Grande do Sul (UFRGS). Since 2010, Patricia enjoyed working part-time as a student research assistant at UFRGS, Politecnico di Milano, and later at Bangor University. In 2013, she started experimenting with sediment gravity flows and physical models at the fascinating interface between geology and engineering. She received her Bachelor of Environmental Engineering in 2015 and in 2018, she obtained a Master's degree in Water Resources and Environmental Sanitation from Hydraulic Research Institute (IPH) of the same university.  From November 2018, Patricia became a Ph.D. fellow at IHE Delft and TU Delft.

Her curiosity was triggered by the idea of intentionally triggering sediment-laden flows, so she is investigating the formation of turbidity currents by an impinging 2D water jet. The core of her research is experimental, and she approaches the problem from a hydraulic and fluid mechanics point of view.  She hopes her PhD research will contribute to a more sustainable management of sedimentation processes in key hydraulic infrastructures (such as water reservoirs).

Patricia applied for and received a grant from CAPES (Coordenação de Aperfeiçoamento de Pessoal de Nível Superior, a foundation of the Ministry of Education of Brazil) to fund her PhD research. 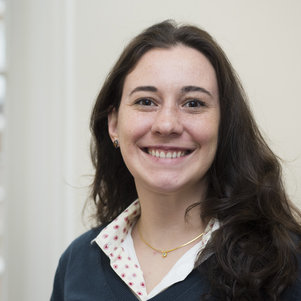