Arjan van Vliet is an engineer from the Technical University of The Hague (industrial engineering and management), speaks six languages, and followed several trainings (TUD, RSM, Leiden university) on a.o. network management, assumption based planning and philosophy. He has been working almost his entire working life in the mobility sector. His current position is senior advisor strategy at RDW where he works on Horizon 2020 project on automated road transport (ART), the proper design and use of driver assistants and  many other related topics. In 2016 he worked intensively on Dutch council presidency. The connected and automated ride for the transport ministers in Amsterdam and truck platooning challenge were the highlights. In a world of petrol heads, he travels preferably by bicycle.

For his main interests, he is working on a cleaner and safer road traffic at the Netherlands Vehicle Authority – RDW. RDW is a public agency of the ministry infrastructure and environment. Increasing road traffic causes congestion, environmental and social challenges. Only traditional measures such as the expansion of the road network seem inadequate. By connecting information and communication technologies from vehicles, roads and back offices, significant contribution for the environmental and road safety can be achieved.

Within the project, he will take up the role as project manager. He will take an advisory and initiating approach to the valorization process of the project. He is part of the national working group on self-driving cars and has an extensive network in Brussels, national governments and the automotive industry. By engaging the network the project results can be enriched and disseminated. 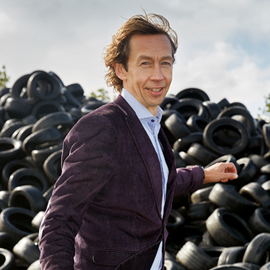