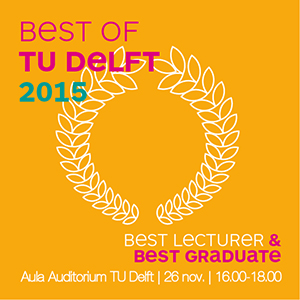 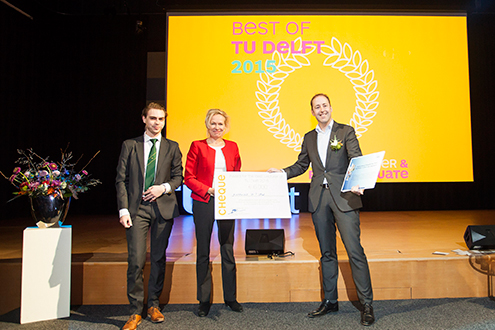 Each year, the Delft study associations vote for the best lecturer in each faculty. A jury comprising students, the previous year’s winner and the Rector Magnificus subsequently chooses one of the individual faculty winners be ‘Best TU Delft Lecturer’. The honour this year goes to AE’s Alexander In ’t Veld.  According to his students and the jury, he more than deserves the title. In ’t Veld has everything that makes a lecturer great: he inspires and motivates, he explains exactly why students need certain theoretical knowledge and he adapts his teaching to the individual needs of students.

His students fondly call him ‘The Flying Professor’ because In ’t Veld is not only a lecturer but he also flies the faculty’s Cessna Citation II research plane and is actually a stunt pilot in his free time. At AE he teaches one of the hardest Bachelor’s courses: the third-year course Flight Dynamics. Drawing from his personal experience in the air and his wealth of knowledge about the history of aviation, he makes the difficult theory really come alive. When it comes to explaining the connection between the design of an aircraft and the pilot’s experience during the flight, he is in a class of his own.

In ’t Veld is an advocate of practical education. “Our students are usually perfectly equipped to grasp theory, tackle problems and pass exams. But to understand how it works in real life, you will have to get your hands dirty from time to time.” Consequently, there is more to Flight Dynamics than just doing sums; students also work with simulation programmes and the faculty’s wind tunnels and flight simulator. 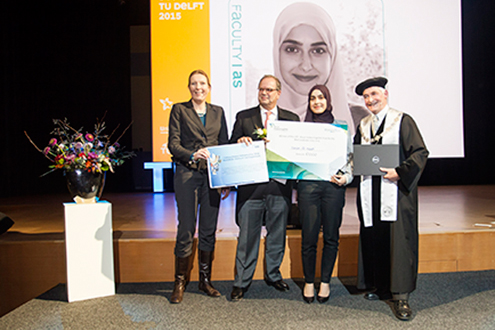 In addition to Best Lecturer, TU Delft’s Best Graduate for the 2014-2015 academic year was also chosen on 26 November. This year, the title went to Applied Sciences’ Hanan Al-Kutubi MSc. She graduated cum laude with a 10 for her Master’s thesis, making her the first Chemical Engineering student since 2005 to earn this final mark. She has already published the findings of her graduation research in three peer-reviewed journals.
Al-Kutubi’s research concerns metal oxides and metal-organic frameworks (MOFs), which are metal ions that together with organic molecules form a three-dimensial structure. There are dozens of potential applications for such MOFs, from chemical catalysis to the controlled release of medications in the body. We are familiar with the use of metal oxides in products such as paint and cosmetics, but they could also play a role in solar cells, for example.

Many of the new applications require thin nano films. Al-Kutubi successfully managed to make these in a standard laboratory oven at temperatures lower than needed to bake a pizza. Moreover, she required very few solvents and synthesis took much less time. This new environmentally-friendly and simple process brings the application of metal oxides and MOFs a lot closer. Al-Kutubi is pursuing her research as a doctoral candidate at the University of Groningen. The Graduate of the Year title is the second honour bestowed upon her within a short time: on 30 November she received the AkzoNobel Award for Chemistry and Process Technology.
The Best Graduate awards are presented annually by faculty by the Delft University Fund. The Best TU Delft Graduate award was sponsored for the third consecutive year by Royal HaskoningDHV.

Read more about this contest and the other nominations.
Please, visit the webpage of the Faculty nomination of Alexander in 't Veld and his research.