The benefits of recycling materials do not only apply to consumer items, but also to entire cities. Francesco Apostoli examined Istanbul and came up with a processing plant that combines the recycling of discarded electronics with a more sustainable use of the city. His graduation project entitled 'Mining Istanbul’ was selected to be entered for the Archiprix International. Apostoli has been graduated at Public Building, tutored by Michiel Riedijk, Alper Alkan and Amir Djalali.

The processing plant for discarded electronic equipment designed by Apostoli forms the heart of an innovative urban system, which links the re-use of materials to new forms of manual work and community activities. The project diametrically contradicts the current ongoing expansion of the metropolis. “The city is a man-made monster that is steadily consuming increasing volumes of territory and materials”, says Apostoli. “And all the while, there are more than enough vacant and discarded buildings that could be re-used within the very same territory.”

After careful research, he decided to build his plant in the ruins of an Ottoman army barracks in the centre of town. The Rami barracks are housed in an enormous edifice dating back to 1828, with a courtyard (‘Campo Marzio’) measuring 200 x 200 metres. Plenty of room for repairing old electronic equipment or stripping it back to raw materials. The master plan also involves a programme to redevelop the huge courtyard and empty space around the buildings. 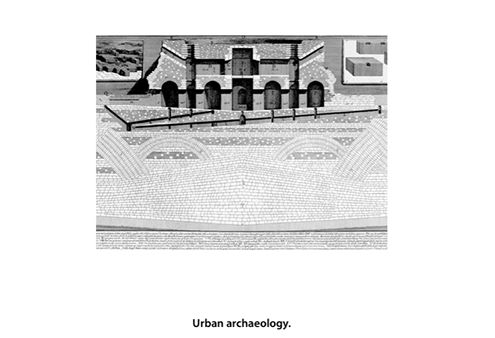 To Apostoli, locating this business function in the city is a logical choice: this is where the waste is produced, so this is where it should be prepared for recycling. Transporting materials only causes an unnecessary burden on the urban infrastructure and wastes even more space. He has dealt with the risk of nuisance to the direct surroundings by positioning the workshops partially below ground level. The plant also organises the public space between the barracks’ gardens and the local residential areas. The design includes underground loading and unloading bays for waste and raw materials, a semi-underground main circulation route and stacked rooms and offices. On the street side, transparent panels create a line of sight for the adjacent neighbourhoods. Concrete walls have been built in a number of places to help organise the space and create a transition between work and relaxation areas. Classrooms and meeting areas have also been created throughout the site.

In Mining Istanbul, Apostoli is making a firm statement in favour of recentralisation. His choice is partly due to previous 'archaeological ' research. Apostoli: “Research and evaluation increase awareness of what is worth preserving and what is not, and what is suitable for recycling.” Research into the history of the Turkish metropolis brings its layered nature to light: its growth into an industrial centre and the accumulation of resources gathered from the entire region. Through the centuries, Istanbul has developed into a fantastic economic, but also military, power. This development took place along the same lines as the industrial development. The Ottoman army barracks, with its robust, monumental walls, is a symbolic remnant of this history of development, and is relevant both now and into the future.

Apostoli sees a parallel between the way he is re-using the building and our current linear attitude to consumer electronics. Both only appear to be valuable as long as they are useful. Apostoli: “Computers and telephones are written off and discarded within a couple of years. The same happens to buildings in Istanbul within a few decades. But both retain their intrinsic value. My project revolves around finding and harvesting this intrinsic value.” 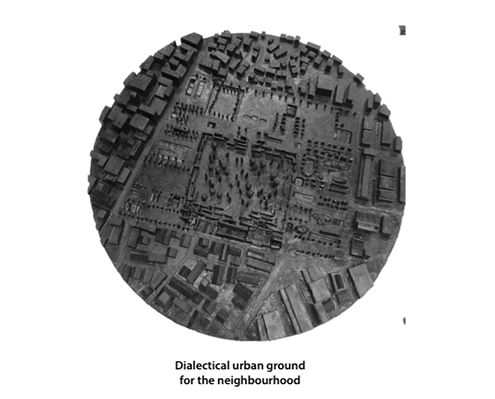 So instead of demolishing an old building and allowing the materials to disappear into oblivion, Mining Istanbul focuses on concentration. In the case of electronics, this means taking equipment apart in a 'refinery' and preparing the parts for recycling. In the case of buildings, it involves finding a new function and transforming the basic construction. Salvaging and recycling materials elsewhere is also an option, but Mining Istanbul focuses on re-using materials in their original place. The current practice in Istanbul of planning and constantly consuming empty space is far from sustainable. The 'build on every square inch’ and unlimited squandering of materials and space philosophy has even used up all the available green space and exhausted many water supplies. “Istanbul is having problems with the quality of life in the city, because it has lost sight of its logistics. Public green spaces are being eroded and buildings discarded unnecessarily. The city will solve many of its problems by dealing with its resources differently.” The choice of the historical army barracks is also a way of creating more urban green areas and redeveloping public space into parks and gardens. The ‘Campo Marzio’ courtyard was once the site where the gardens of the Grand Vizier bloomed and flourished. Mining Istanbul restores this space to a green oasis where people can relax and escape the hustle and bustle of the city.

'Mining Istanbul' was given an honourable mention in the Archiprix Nederland. This prize is awarded annually for the best graduation project in a Dutch Master's degree programme in architecture, urban planning and landscape architecture. Various models and a big book with text and illustrations were on display in the Timmerhuis in Rotterdam in June. Mining Istanbul will also be shown at the Archiprix International 2017.