In order to prevent flooding in the Netherlands, water is pumped out of the polder by pumping stations via ditches and drained with the help of canals and rivers. All of these changes to the landscape are part of the 'Polder-boezem system'. Doctoral candidate and associate professor of landscape architecture Inge Bobbink advocates greater visibility and cohesion for these water elements. The cultural-historical value and landscape architectural quality of the Polder-boezem system will otherwise be lost, along with the lowlands identity. On Tuesday, 11 October, Inge Bobbink is being awarded her doctorate at TU Delft for her work on this subject.

Inge Bobbink has performed an extensive analysis of the water system in the Randstad conurbation and the northern part of North Holland province in order to contribute to the knowledge of the landscape architectural quality of the Polder-boezem system. According to Bobbink, too many individual changes are being made to the Dutch landscape. "The government, including the water boards, still focuses too much on the civil engineering aspects of water management - the practical changes to the landscape required to drain water. Attention is paid to the development of nature-friendly banks and the design of pumping stations, but all of these elements are not viewed and emphasised as part of the Polder-boezem system. This is important, because it is precisely the Polder-boezem system that is capable of countering the fragmentation of the landscape (including urban) and strengthening spatial cohesion."

There must be a better balance between water management and landscape architectural choices - the manner in which you integrate water elements, such as a ditch, a canal and waterworks, into the landscape. Bobbink explained, "Technically speaking, we can accomplish a great deal in the field of water management, but the purpose of the change, and how it forms part of the water system and the landscape, must be clear. Otherwise, we will lose the knowledge concerning the choices that have been made. For example, the choice to detach certain parts of a basin from the system. The watercourse in the dike is no longer a part of the system, but is still present in the landscape as a distinctive feature. I would want to shape the dike containing the watercourse in such a way that its story - once a basin and now a relic - is made visible."

Inevitably, climate change is also a factor in any study of the water system in the Netherlands. Heavy rainfall has increased as a result of climate change. Bobbink clarified, "In urban areas, the sewers cannot handle the amount of water during a heavy rain shower. To collect the excess water, canals - visible water - are being reintroduced in Delft and Utrecht, for example. These canals are part of the Polder-boezem system and are connected to the water outside the city. Choices will have to be made regarding places where water can be stored temporarily both inside and outside cities throughout the Netherlands. The design of the system expansion could make the underlying landscape layer accessible, visible and perceivable." 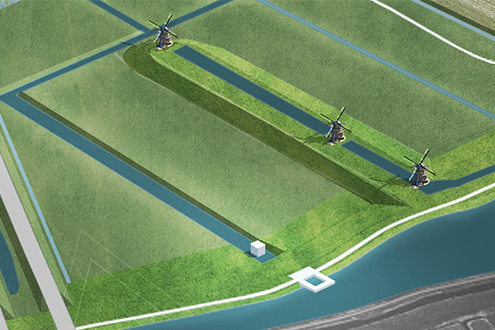 With knowledge of the origins and cohesion of the Polder-boezem system, the Netherlands can better position itself as 'The Netherlands - a land of water'. Changes to the landscape and new landscape designs can contribute to this. Bobbink added, "In order to make the inhabitants of the Netherlands aware of the fact that many of them live below sea level, we will always have to work on water management. In the past, visible landmarks such as mills were used to pump the water away. Now only square buildings with an unknown function are used. You can make people aware of the innovation by, for example, placing a modern pumping station in an interesting way in the landscape next to a mill configuration. A viewing platform on the roof of a pumping station can also make hikers aware of the water being pumped up. You could build a water bridge in cities to make people aware of the water being drained into a river or into the sea."