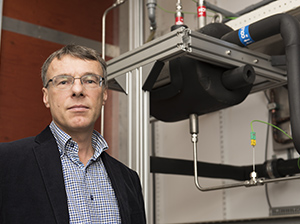 A nuclear reactor that works with molten salt and thorium is an improvement over current nuclear reactors in almost all respects. A thorium reactor is inherently safe and produces much less, and less hazardous radioactive waste. This makes it an excellent technology for reducing global carbon emissions, e.g. when used in combination with solar and wind energy. This was said by Professor Jan-Leen Kloosterman during his inaugural speech on Friday, 1 April at TU Delft.

“The enormous advantage of nuclear power plants is that they do not produce any CO2 when generating electricity,” said Professor of Reactor Physics Jan-Leen Kloosterman. “There is good reason why scenario studies of organisations such as the World Energy Council show that in 2050 more than 10% of our global energy needs will have to be provided by nuclear energy, if we want to keep climate change somewhat under control.”

“Unfortunately, as we are aware, the current nuclear power plants also have significant drawbacks: particularly in relation to nuclear waste and safety. This is why, in my opinion, we must choose a drastically different nuclear approach: in other words, a nuclear reactor which does not produce waste that has to be subsequently cleaned up, but one that produces much less long-lived waste. And such a reactor is possible!” 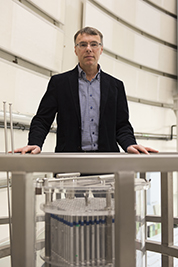 “The relevant technology was demonstrated as early as in the sixties, but was unfortunately relegated to the sidelines afterwards,” Kloosterman continued. “This is the Molten Salt Reactor or MSR technology that works with thorium.” The MSR consists of a graphite block with channels through which a salt containing nuclear fuel is circulated. The heat generated is transported through an intermediate circuit to the energy conversion system where it is converted into electricity. A small fraction of the salt is continuously drained and purified:  for a fast MSR, this amounts to only 40 litres per day. In a special chemical laboratory, this salt is stripped of its fission products via a number of steps and fed back into the reactor core after adding thorium to it.

The safety philosophy for an MSR is completely different from that of other reactors since the nuclear fuel is dissolved in the coolant. In a conventional reactor, everything is geared towards keeping the nuclear fuel intact during incidents and ensuring that the fuel always is cooled down. But in an MSR, the main thing is to allow the salt to freely expand and flow. Expansion leads to a reduction in the amount of nuclear fuel in the reactor core and hence to a reduction in the chain reaction, while the option of allowing the salt to flow freely can be used to safely store the salt at the bottom of the reactor building in case of extreme situations.

“Since we run the MSR with thorium instead of uranium, this reactor has the potential to produce electricity safely, and in an extremely clean and sustainable manner. Thorium itself is not a fuel but a breeding material that decays into uranium-233 which is highly fissile. The uranium continues to circulate in the salt, as a result of which very little radioactive waste is produced. Moreover, the most (potentially) hazardous elements continue to circulate in the salt solution until they have been completely split into fission products.”

“In an MSR, we are able to utilise the thorium fully. This means that we only need 2,500 tons of thorium per year to produce all the electricity worldwide, while each year up to 50 times more thorium is being extracted from the ground by the existing mining industry,” said Kloosterman. “If you could fuel your car's tank with just a tiny piece of the thorium-containing mineral Aeschynite, you would definitely be able to drive at least once around the entire world.”

“Many of the above principles were already demonstrated decades ago at the Oak Ridge National Laboratory (USA) in a highly successful reactor with more than 6,000 hours of operation. Though this reactor did not yet purify the salt or use thorium as a breeding material.”

The Netherlands and TU Delft in particular play a special role in this field. “About ten years ago, we re-embraced the molten salt reactor technology at TU Delft and very quickly made a number of improvements. Our design is even safer and cleaner than the initial American version.”

“But there is scope for further improvement. At present, we are working at a European level to develop a reactor design that will also allow us to destroy the nuclear waste generated from existing reactors. In addition, this reactor will be able to adequately compensate for the (inevitable) fluctuations in electricity generation based on solar and wind energy. With a smart combination of solar, wind and nuclear technology, we can arrive at a truly robust and sustainable electricity supply.”

Extensive efforts are being made to develop a thorium reactor outside of Europe as well. The Dutch government is also open to further research in this direction. Nevertheless, there are technological hurdles yet to be overcome and it could still take several decades before there is a functioning thorium reactor. TU Delft is investigating this through its research.

“For example, the Molten Salt Reactor requires special materials that are capable of withstanding the harsh conditions within the reactor core over a period of 50 years. This is the specific field of research of the 3mE faculty of TU Delft and NRG in Petten, where researchers will soon launch the first irradiation experiments in 50 years involving contact between molten salt fuels and various metals and graphite.”

You can watch the inaugural speech by Collegerama (only in Dutch).