If global efforts to reduce carbon emissions fail and temperatures will rise, a last resort could be to turn to geoengineering methods, likethe injection of aerosols in the stratosphere. This will produce stratospheric clouds which reﬂect part of the incoming sunlight. Students of the TU Delft have looked into the practical aspects of this option, including the design of a new aircraft to deliver the aerosols into the stratosphere and a rough cost estimation: 11 billion dollars per year.

Current models of the climate show that a possibility exists that the response of society to counteract rising global temperatures is not implemented fast enough or does not become effective fast enough to ensure temperatures remain within safe bounds. In that case, an intervention might be necessary to temporarily halt temperature increase until preventive long-term solutions are effective.

Stratospheric geoengineering, more specifically, Solar Radiation Management (SRM), offers such a temporary solution. A possible implementation of SRM is the injection of aerosols in the stratosphere, producing stratospheric clouds which reﬂect part of the incoming sunlight. It mimics volcanoes by spraying sulfuric acid into the stratosphere. This thin, high, long-lasting haze reflects a little sunlight, keeping us cool. 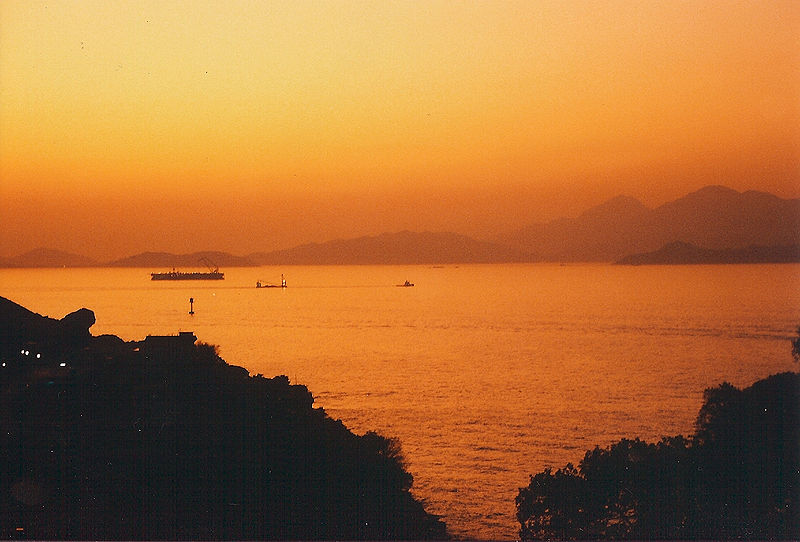 Sunset over Hong Kong a year after Mt Pinatubo erupted in the Philippines, showing how aerosols released by volcanoes can affect our environment (Credit: JackyR, Wikipedia)

Students of the TU Delft (faculty of Aerospace Engineering) have produced a research report* to describe the preliminary technical and operational design of a ﬂeet of purpose-built Stratospheric Aerosol Geoengineering Aircraft (SAGA) to deliver ﬁve megatons of aerosol per year to altitudes between 18.5 and 19.5 km to gain insight in the cost and impact of such a system.

Dr. Steve Hulshoff, who supervised this student project: ‘I want to stress that this is not a solution we advocate to ‘solve’ the global warming issue. First and foremost, we need to reduce carbon emissions. If these global efforts fail, and temperatures reach dangerous levels,  a last resort could be to use geo-engineering methods, like SRM, in order to temporarily halt the temperature increase. But only as a last resort.’

‘There will also be severe drawbacks to SRM, like acidification of the oceans’, Hulshoff warns. ‘We will not see a blue sky as often as we do now, and ozone depletion, deposition through precipitation and climate effects other than temperature reduction, will inevitably affect the environment.’

Nevertheless, the group of students have looked into some practical aspects of the last resort option of SRM. The design of an aircraft delivery system for stratospheric aerosol geoengineering has provided valuable insights in the practical aspects of geoengineering. Their aircraft is designed for the job of geoengineering, and nothing else. It’s designed to go a lot higher but won’t be required to fly huge distances – so its range is only a little over half that of a jumbo.

The high altitude and high payload requirements drive the design of all aspects of the SAGA mission. First of all, the operational scenario, employing a ﬂeet of 344 unmanned aircraft, enabling 572 ﬂights per day, is established with focus on the most efﬁcient delivery of the required 5 Megatons  of sulfuric acid aerosol to the stratosphere, which would theoretically be enough to halt temperatures rising.

In the plan of the TU Delft students, sulfuric acid will be ejected from the aircraft in gas phase to facilitate efﬁcient aerosol particle formation. Transport of the aerosols at elevated temperature in combination with on-board evaporation enable gas phase dispersion, introduce a compelling power requirement. Aerosol dispersion will occur in the tropical region at altitudes between 18.5 and 19.5 km.

The high altitude at which dispersion takes place, governs the aircraft design. This altitude demands efﬁcient lift generation and considerably high thrust. The need for efﬁcient lift generation results in a design featuring a combination with a wing surface area of 700 m2. The structural integrity of this long and slender wing is ensured with the help of a strut-braced wing design. Purpose-built engines are proposed to efﬁciently provide thrust and power to SAGA aircraft. Four engines, each providing over 600 kN thrust at sea level, facilitate this.

The costs of SAGA are estimated to amount to an initial capital cost of 93.9 billion US dollars and a yearly operational cost of 11 billion dollars, which are acceptable amounts considering the costs of global warming, according to the students.

TU Delft Climate Institute is the place within TU Delft where climate researchers and climate research are brought together, ultimately to develop new scientific knowledge. Prof. Herman Russchenberg, director of the institute, applauds and stimulates the type of out-of-the-box thinking shown by the students, ‘because the world community is still not doing enough to keep climate change in check.’

According to Russchenberg we have to be very reluctant in applying techniques like these, as we don’t know their influence on the earth system, we haven’t considered legal en ethical aspects enough, and we may even increase the problem by temporarily masking temperature rise. ‘But there may come a time when we will actually be needing techniques like these, like it or not. The sooner we start investigating practicalities, potential pitfalls and consequences, the better prepared we will be.’

*The Design Synthesis Exercise (DSE) is the conclusion of the undergraduate part of the education in faculty of Aerospace Engineering in Delft. This report on SAGA was produced by one of the groups of students in the last edition of this DSE.