Improving understanding of the quantum world with quantum dots

Quantum behaviour plays a crucial role in novel and emergent material properties, such as superconductivity and magnetism. Unfortunately, it is still impossible to calculate the underlying quantum behaviour, let alone fully understand it. Scientists of QuTech, the Kavli Institute of Nanoscience in Delft and TNO, in collaboration with the ETH Zurich and the University of Maryland, have now succeeded in building an 'artificial material'  that mimics this type of quantum behaviour on a small scale. In doing so, they have laid the foundations for new insights and potential applications. Their work is published today in Nature.

Within the last century, an understanding of the underlying physics of semiconductor materials has led to many technological improvements, such as computer chips becoming ever faster and smaller. We are, however, gradually reaching the limits of Moore's Law: a doubling in computing power for half the price every two years. But there is still much more uncharted territory to be explored. Professor Vandersypen: ‘There is so much physics left to discover if we truly want to understand materials on the very smallest scale.’ And that new physics is set to bring even more new technology with it. Professor Vandersypen: ‘The difficulty is that, at this scale, quantum theory determines the behaviour of electrons and it is virtually impossible to calculate this behaviour accurately even for just a handful of electrons, using even the most powerful supercomputers.’

The scientists are now combining the power of the semiconductor industry with their knowledge of quantum technology in order not to calculate the behaviour of electrons in materials, but to mimic it. We call this quantum simulation. Vandersypen: ‘I hope that, in the near future, this will enable us to learn so much about materials that we can open some important doors in technology, such as the design of superconductors at room temperature, to make possible loss-free energy transport over long distances, for example.

It has long been known that individual electrons captured on a chip, known as quantum dots, are in principle suitable for researching the behaviour and interactions of electrons in materials. The captured electrons can move or 'tunnel' between the quantum dots in a controlled way, while they interact through the repulsion of their negative charges. Doctoral candidate Toivo Hensgens: ‘Processes like these in quantum dots, cooled to a fraction of a degree above absolute zero, are perfectly suitable for simulating the electronic properties of new materials.’

In practice, it is a major challenge to control the electrons in quantum dots so precisely that the underlying physics becomes visible. Imperfections in the quantum chips and inefficient methods of controlling the electrons in the dots have made this a particularly hard nut to crack.

The scientists have now demonstrated a method that is both effective and can be scaled up to larger numbers of quantum dots. The number of electrons in each quantum dot can be set from 0 to 4 and the chance of tunnelling between neighbouring dots can be varied from negligible to the point at which neighbouring dots actually become one large dot. ‘We use voltages to distort the (potential) landscape that the electrons sense,’ explains Toivo Hensgens. ‘That voltage determines the number of electrons in the dots and the relative interactions between them.’

In a quantum chip with three quantum dots, the QuTech team has demonstrated that they are capable of simulating a series of material processes experimentally. But the most important result is the method that they have demonstrated: ‘We are now easily able to  add more quantum dots with electrons and control the potential landscape in such a way that we can ultimately simulate very large and interesting quantum processes,’ says Hensgens.

The Vandersypen team aims to progress towards more quantum dots as soon as possible. To achieve that, he and his colleagues have entered a close collaboration with chipmaker Intel. Vandersypen: ‘Their knowledge and expertise in semiconductor manufacturing combined with our deep understanding of quantum control offers opportunities that are now set to bear fruit.’ 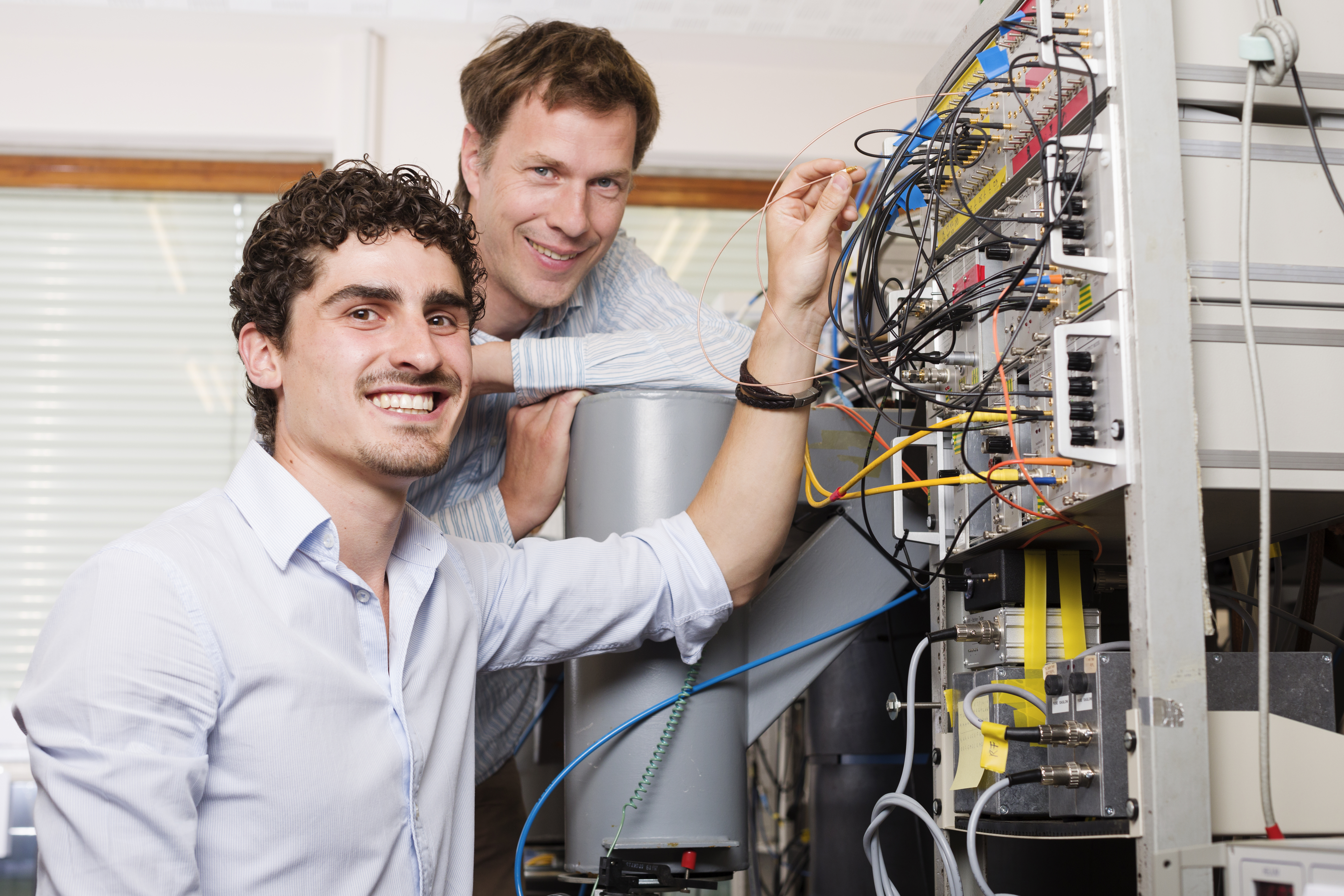 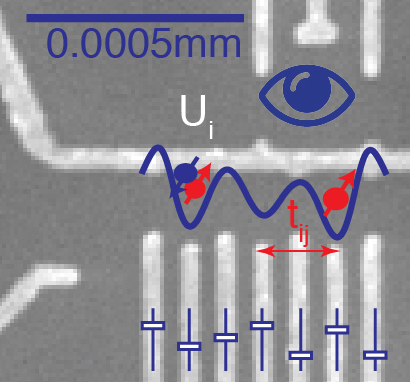 Image of semiconductor quantum chip.
By applying  voltages on ‘gates’ (white lines), electrons (red and blue arrows) can be captured in quantum dots. The potential landscape (blue line) determines the locations where the electrons are captured. With an extra large quantum dot (eye), it is possible to read the quantum information.