The Tovertafel (Magic Table) is a light-hearted product that helps those suffering from dementia to exercise whilst bringing them pleasure. The initiative is a fine example of how scientific research can result in valuable health care innovation in the outside world. Hester Anderiesen-Le Riche, who developed the Tovertafel, will obtain her doctorate from TU Delft on Monday, 24 April 2017 with research into this subject.

Apathy
‘90 per cent of residents with dementia at health care institutions suffer from apathy. The aim of my doctoral research was therefore to reduce the passiveness of elderly people with dementia by developing a product that stimulates their physical activity and social interaction. It should be a light-hearted project or a game that would also offer the residents an element of enjoyment,’ explains Hester Anderiesen-Le Riche.

Participation
This consideration formed the basis for Anderiesen-Le Riche’s doctoral research, which she began by conducting various studies to learn more about the target group and the context in which they live. Following multiple design phases, always combined with scientific research (so-called ‘research by design’), the final concept for the Active Cues Tovertafel was developed; a light-hearted product featuring various interactive games, which are projected onto a dining table.
Anderiesen-Le Riche: ‘We used the prototype for this ‘serious game’ to conduct testing with the residents and staff of the health care institutions. Contrary to what we had believed possible, the residents themselves played a highly interesting, participatory role in the further development of the product.’
One of the health care professionals closely involved with the development of the Tovertafel is Marja Dijkwel, a nurse at Careyn (a domiciliary care, nursing and health care provider). ‘The Tovertafel is still being used at our organisation on a daily basis. It offers people with dementia the chance to interact and to exercise. When I see how much pleasure the Tovertafel brings to our staff and residents, I am proud that I was given the opportunity to contribute to its development, based on my expertise.’ 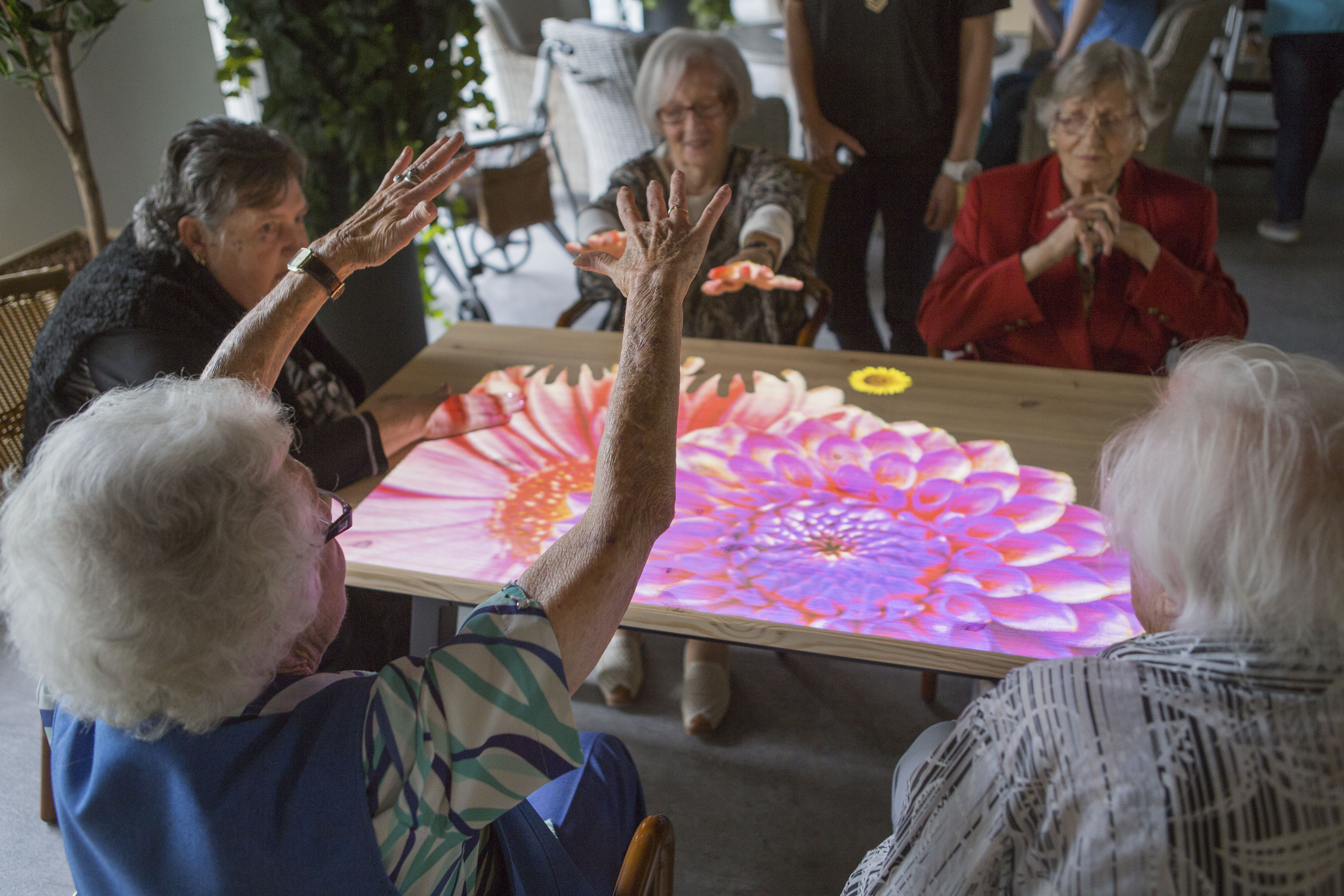 Playing with light
The Active Cues Tovertafel is a light-hearted product featuring various interactive games, which are projected onto a dining table. The interactive light animations are a playful means of stimulating physical and cognitive activity as well as social interaction, whilst helping to unite residents of health care institutions. The games invite participants to reach out with their arms or move their hands, to which the animations respond. The interactive projections mean that the residents can ‘play with light’. For example, by throwing a ball to each other, or sweeping autumn leaves from the table. ‘It is essential for the interactions between the people suffering from dementia and the light projections that the games are intuitive and accurate,’ says Hester Anderiesen-Le Riche. ‘Otherwise, the players will be quickly distracted. All the Tovertafel games are based on recognisable projections. This lends the interactions a sense of familiarity and offers residents the chance to reminisce on past experiences and personal stories.’

Practical application
‘The Tovertafel turns out to have the potential to reduce apathy in people in the middle to late stages of dementia by stimulating physical activity and social interaction. The outcomes also show that it brought improvements in terms of enjoyment, anger, fear and distress. By utilising a creative design in geriatric care, we have achieved a maximum effect with minimal financial investment.’

The popularity of the Tovertafel is certainly evident in the world outside the university’s walls. Hester Anderiesen-Le Riche now runs Active Cues, a successful company that translates the Tovertafel – and other innovative concepts – into practice. One thousand Tovertafels are already making a difference to the lives of dementia patients in four countries, and the company has meanwhile developed versions of the product for adults with learning difficulties (the Tovertafel UP) and for children with autism (the Tovertafel Unique). When designing these new versions, the company also used design guidelines based on the scientific research from Anderiesen-Le Riche’s doctoral research at TU Delft.