Faster than a cheetah

Cyclist Aniek Rooderkerken broke the Dutch speed record for women last Saturday, clocking 121.5 km/h to win the World Human-Powered Speed Challenge in the Nevada desert. In this competition for the most innovative cycles and riders from all over the world, Rooderkerken was riding the VeloX 7: a high-tech aerodynamic recumbent bike designed and built by the Human Power Team, a group of students from TU Delft and VU Amsterdam.

“It’s so cool riding that fast,” Rooderkerken declared after her win. “As if you were flying over the road”. In the week leading up to her final victory, she had already unofficially broken the Dutch record of 114 km/h, set by Ellen van Vugt in 2014, on no fewer than four occasions. All of those efforts were ruled invalid, however, due to strong winds. “We had bad luck with the weather all week,” says Rooderkerken, “but it finally improved on the last day. In good weather, the Nevada desert is ideal for high speeds. We race on a dead-straight road, 10 kilometres long. But what counts is the average speed over the last 200 metres, so that was where I gave it all I had and just focused upon going as fast as possible. In the end I made it up to 121.5 kilometres an hour.” That was a mere 0.3 km/h short of the current world record of 122 km/h, set by Barbara Buatois of France in 2010. This year, Rooderkerken beat both Buatois and Van Vugt to claim first place in the women’s Human-Powered Speed Challenge. Her teammate, former pro racer Iris Slappendel, also pedalled superbly to take second place with a speed of 115 km/u.
The Delft-Amsterdam Human Power Team has previously won the men’s challenge on four occasions. 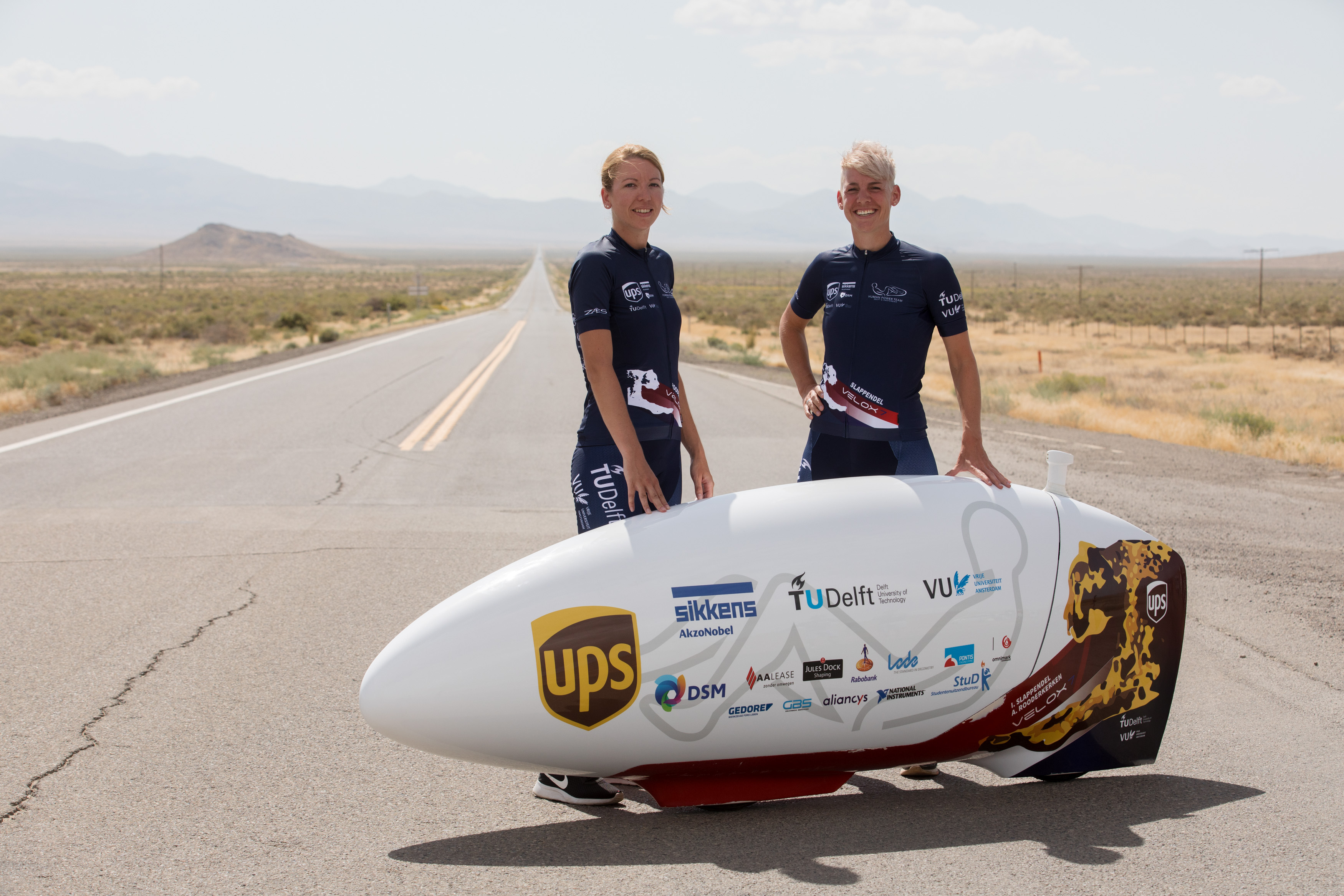 Speeds this high are achievable only through a perfect combination of human strength and technology. The streamlined design of the VeloX 7 plays an important role, says Human Power Team manager Emiel de Boer, a Mechanical Engineering student at Delft. “Your greatest enemy at high speed is drag. That’s why you always see racing cyclists bent forward as far as they can, to minimise air resistance.” For this reason, his team has made a particular effort this year to make its bike as drag-free as possible. Using computer simulations and wind-tunnel tests, the bike was perfectly matched to the size and posture of its riders. “As a result,” De Boer, “our vehicle is more than ten times more aerodynamic than an ordinary racing bicycle.”

“But you don’t just ride fast because you have fast bike,” he continues. “The rider is at least as important.” The Human Power Team athletes were trained by students of Human Movement Sciences at VU Amsterdam and placed on a special sports diet. “I was given a schedule with fifteen hours of training a week,” says Rooderkerken. “It takes that kind of intensive regime to achieve this result.” To give their bodies time to acclimatise to the desert conditions, the riders arrived in Nevada a week before the races began. Everyone in the team agrees that this outstanding result was only possible through the optimum combination of human effort and technology. 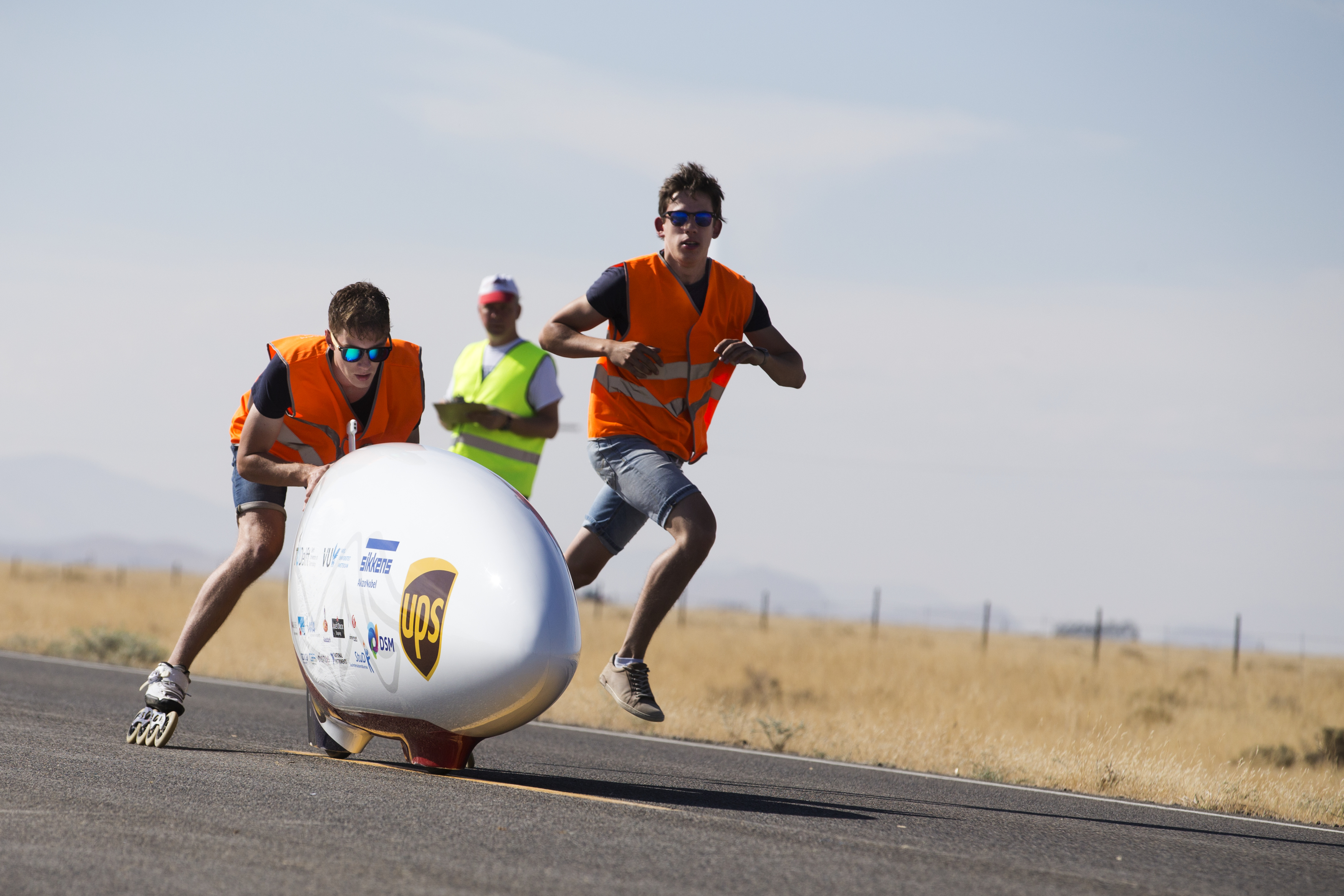 Faster than a cheetah

Through this project, the students on the Human Power Team want to show that technical innovation can help people outperform nature.  With Aniek Rooderkerken’s latest record, they have achieved that goal by easily exceeding the 112 km/h maximum speed of the world fastest land animal, the cheetah.

More and information and press contacts

For more information, see also the website of the Delft-Amsterdam Human Power Team.