The simple old Japanese tradition of water sprinkling - uchimizu - is an effective way of reducing extreme heat in cities. This will be TU Delft researcher Anna Solcerova's message at the EGU General Assembly (European Geosciences Union) in Vienna on Monday 24 April.

It has long been known that, generally speaking, cities are hotter than the surrounding countryside; a phenomenon known as the ‘Urban Heat Island’ (UHI). Roads and buildings absorb and retain more solar radiation than the soil and vegetation found more prominently in the countryside. This causes the city to heat up more, an effect which is further reinforced by human activity such as heating and transport.

The Urban Heat Island effect was first described some 200 years ago, but methods for mitigating heat in urban areas have been around much longer. ‘Uchimizu is one of these techniques, which was already being used in Japan in the 17th century’, says Anna Solcerova. Houses, temples and gardens and their surroundings were sprinkled with water to cool the surfaces and the air, and to keep down the dust. Nowadays, mega-cities such as Tokyo are attempting to breathe new life into these old methods. Local authorities promote uchimizu as a “smart way to stay cool”. ‘I was unable to find much in scientific literature about the effect of uchimizu. The number of studies published that quantify the cooling effect is limited, and they only use temperature measurements from a certain height above ground.’ 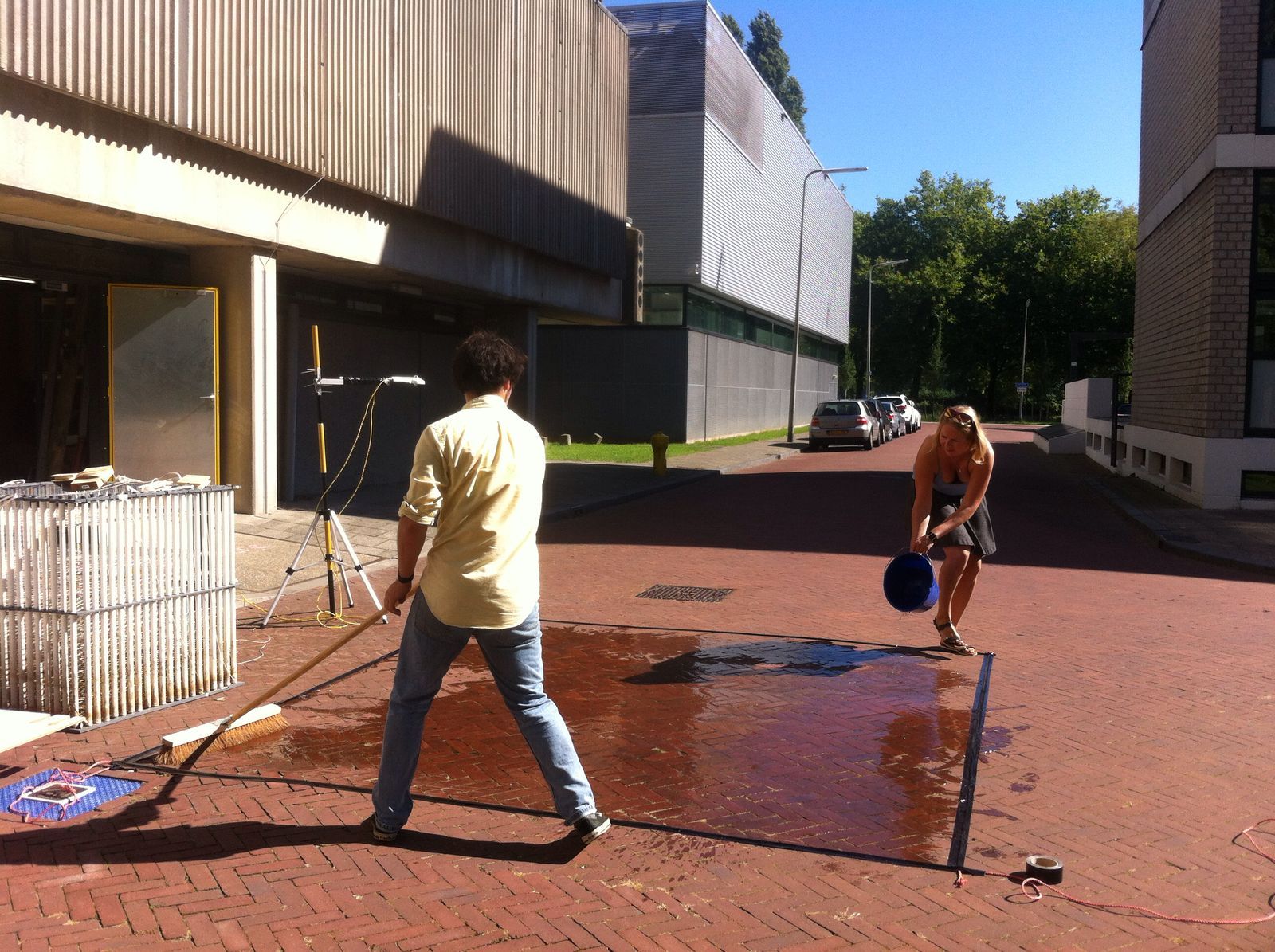 For this reason, this study, which is part of Anna Solcerova's PhD research, uses a 3D Distributed Temperature Sensing (DTS) system to record extremely precisely (in space and time) the air temperature in one specific cubic metre of air above a pavement in a city. Solcerova and her colleague Tim van Emmerik tested this system using a large cube with fibre optic cables (designed by Van Emmerik and TU Delft colleague Koen Hilgersom) that measure the temperature. They poured water around and under the cube; first 1 mm, then 2 mm, and so on.

Several experiments were carried out to systematically study the effect of the amount of water, the starting temperature of the surface and the influence of shade on the cooling effect of uchimizu. During the conference in Vienna, the researchers will present the results and analysis of the experiments which were carried out during one summer in Delft. The general conclusion is that uchimizu always works; the ground always becomes cooler. But the effect is greatest at times when the heat is less intense. And the effect in the shade is greater than in the sun (due to evaporation). ‘We show that this simple method of sprinkling water has the potential to considerably reduce extreme heat in paved urban areas. In addition, uchimizu presents an opportunity to increase the awareness of city dwellers and to encourage them to solve heat stress and to save energy. By adding new insights to the existing knowledge of uchimizu, we want to contribute to a revival of this old tradition.’