Wind turbines as inspiration for ships

‘Innovations from the wind energy sector seldom find their way to shipbuilding, despite undeniable similarities. Researchers in the areas of marine engineering and control engineering seize the opportunity offered by the cohesion programme to change this.’

The principle of a wind turbine and that of a ship’s propeller don’t differ all that much. In both cases, an optimal efficiency needs to be extracted from a number of rotating blades. Yet there is surprisingly little synergy between the two areas. That was also the conclusion drawn by Dr. Arthur Vrijdag at the Dept. of Maritime and Transport Technology, who works on innovative maritime designs, and Prof. Jan-Willem van Wingerden at the Delft Centre for Systems and Control, who studies new ways to control wind turbines. High time to change this! Dr. Cornell Thill (Dept. of Maritime and Transport Technology), manager of the Delft towing tank, was excited about the idea right away. The first step of the team is the develop a scale model and perform dynamic model experiments. Their cohesion project ‘Rotor-propeller control to suppress vibrations’ is almost ready to be launched. 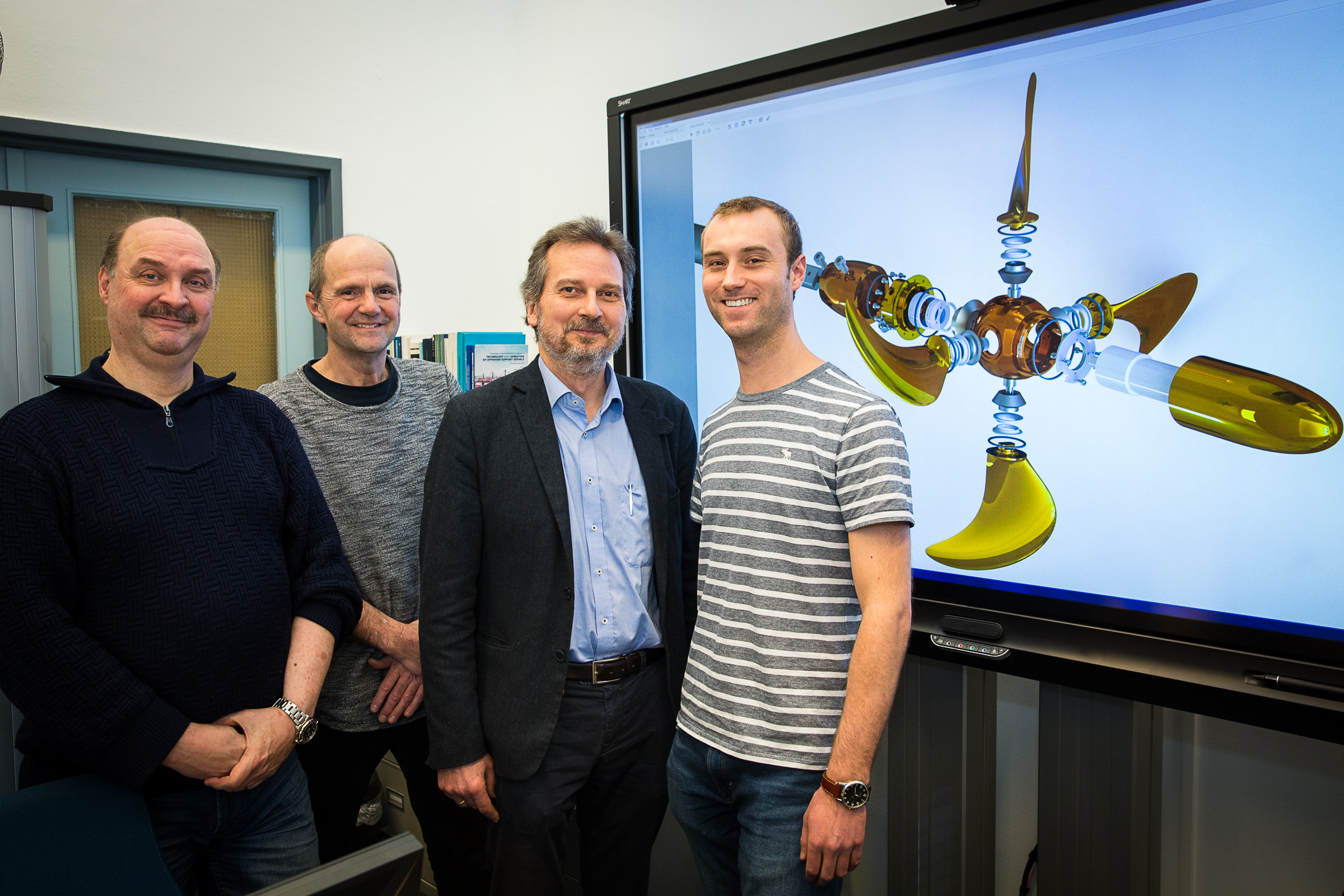 A much more realistic model
How do you optimise the way a ship is propelled? This challenge is a multidisciplinary one: the dynamics of an operational ship are determined by an interplay of technical components (the ship’s propellers, rudder, power system), circumstances (waves, winds, manoeuvres, changes in speed) and processes (hydrodynamics, machine technology, control engineering). To gain more insight into how this all comes together, experiments on a model scale are essential tools. But these model tests should not be simplified so much that they ignore the complexity of the real world. ‘A simple model moving on a smooth sea, that’s something anyone can do. We want to take it a step further and develop a model propeller that can be dynamically adjusted to the dynamics of realistic conditions.’

Propulsion system dynamics
One element that’s specifically absent in ship models concerns the propulsion system dynamics. ‘Have you ever noticed that the wing of an aeroplane changes shape during take-off and landing? This is done to obtain the required lift and aerodynamics. Similar techniques are being developed for the wind energy sector: the position of each blade of a wind turbine can be changed individually, and this setting adjusted dynamically to the changing conditions. The same thing is possible for ship propellers: the option to change the rotation of each blade around its long axis –the pitch– offers interesting possibilities that have not been fully studied. ‘Such a propeller system is fundamentally different from anything in existence now.’

Combination of disciplines
‘The combination of advanced control systems and an adjustable propeller system opens a world of new possibilities for the maritime sector,’ explains Vrijdag. For example to prevent vibrations, to increase the propulsion efficiency, and to minimise the phenomenon of cavitation.’ Cavitation can occur near spinning propellers when bubbles of water vapour are formed and subsequently implode. These implosions are not only noisy but can also damage the propeller’s blades. To prevent such damage, but also to avoid disturbing marine life and towards military applications, it is desirable to have a little cavitation as possible. ‘To achieve that, a combination is needed of marine engineering and control engineering, precisely the disciplines we brought together in our cohesion project.’

‘The combination of advanced control systems and an adjustable propeller system opens a world of new possibilities for the maritime sector.’

Towing tank
What is needed to exploit the potential of a dynamic pitch? First of all, an adjustable, model-scale propeller system to test new measurement and control strategies in a so-called towing tank. The cohesion project offered the researchers the possibility to start working on a new type of model propeller with a pitch that can be adjusted without the need for halting the experiment and getting the model out of the tank, fitted with sensors for measuring thrust and torque that do not influence the experiment. Their plan to develop such a model brought the cohesion team to Thill, who is responsible for the towing tank of TU Delft. Due to his enthusiasm for the project (‘There’s really nothing more fun than marine engineering!’), he quickly became a driving force.

Model in the making
Daan Schuttevaer, the marine engineer hired on the cohesion project, proudly shows off his propeller model in the making. The blades, about 10 cm in length, are still made of aluminium, a material allowing quick and cheap experimentation until the final propeller is manufactured in bronze. The blades fit onto a hollow football of sorts, on top of which is mounted the electric motor that rotates the blades along their long axes. The control technology, a circuit board full of chips and connections, is ready to be attached to the exterior of the motor. The combination of motor and circuit board is finally sealed off by a conical tube made of bronze. The overpressure in this tube, thanks to a car tire valve, should prevent water to enter in case of a leak. ‘What makes this design remarkable is that the electric motor that is used to change the blades’ pitch is fixed to the propeller, spinning along with it. In this way we prevent that adjustment of the pitch disrupts the measurement of thrust and torque.’ 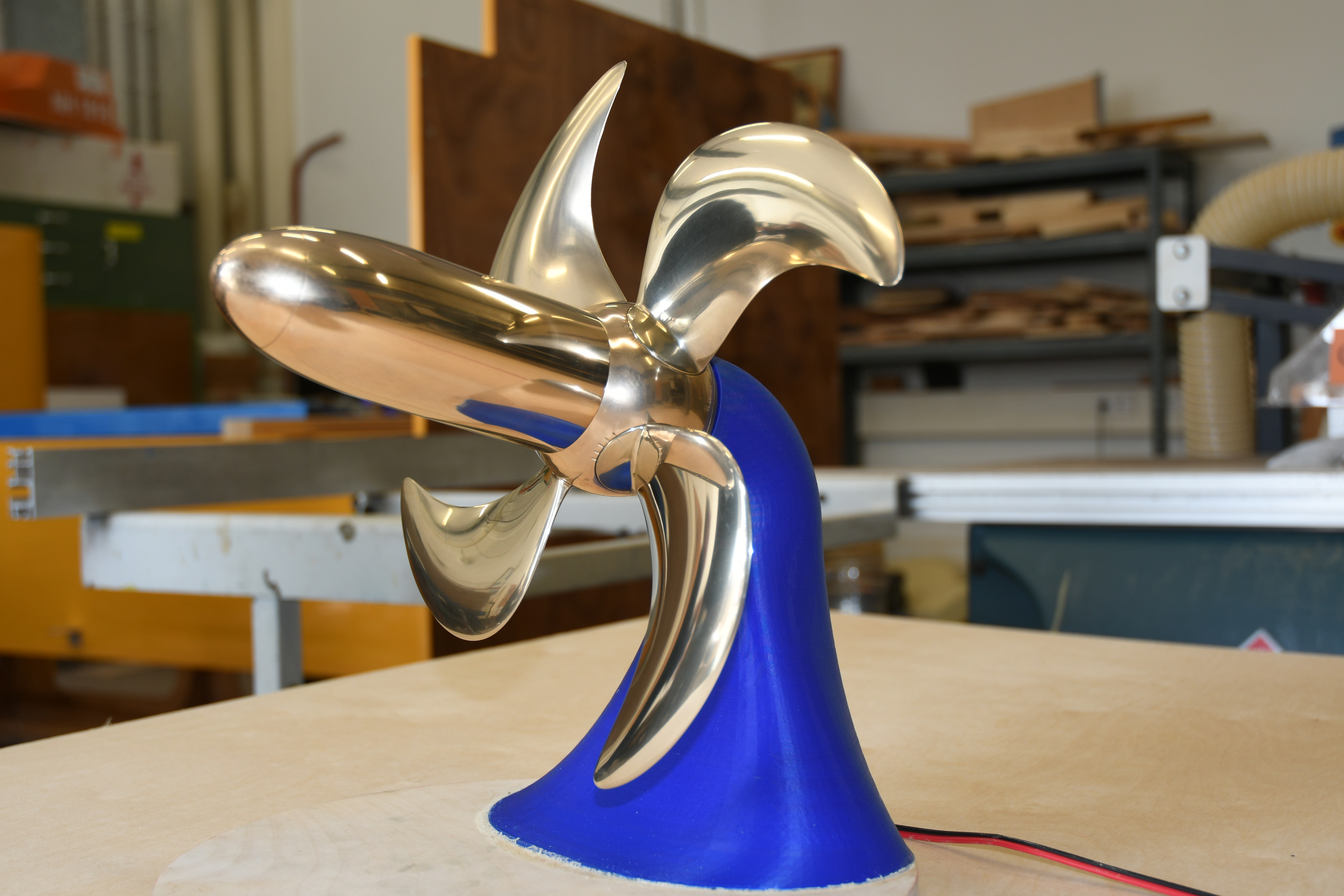 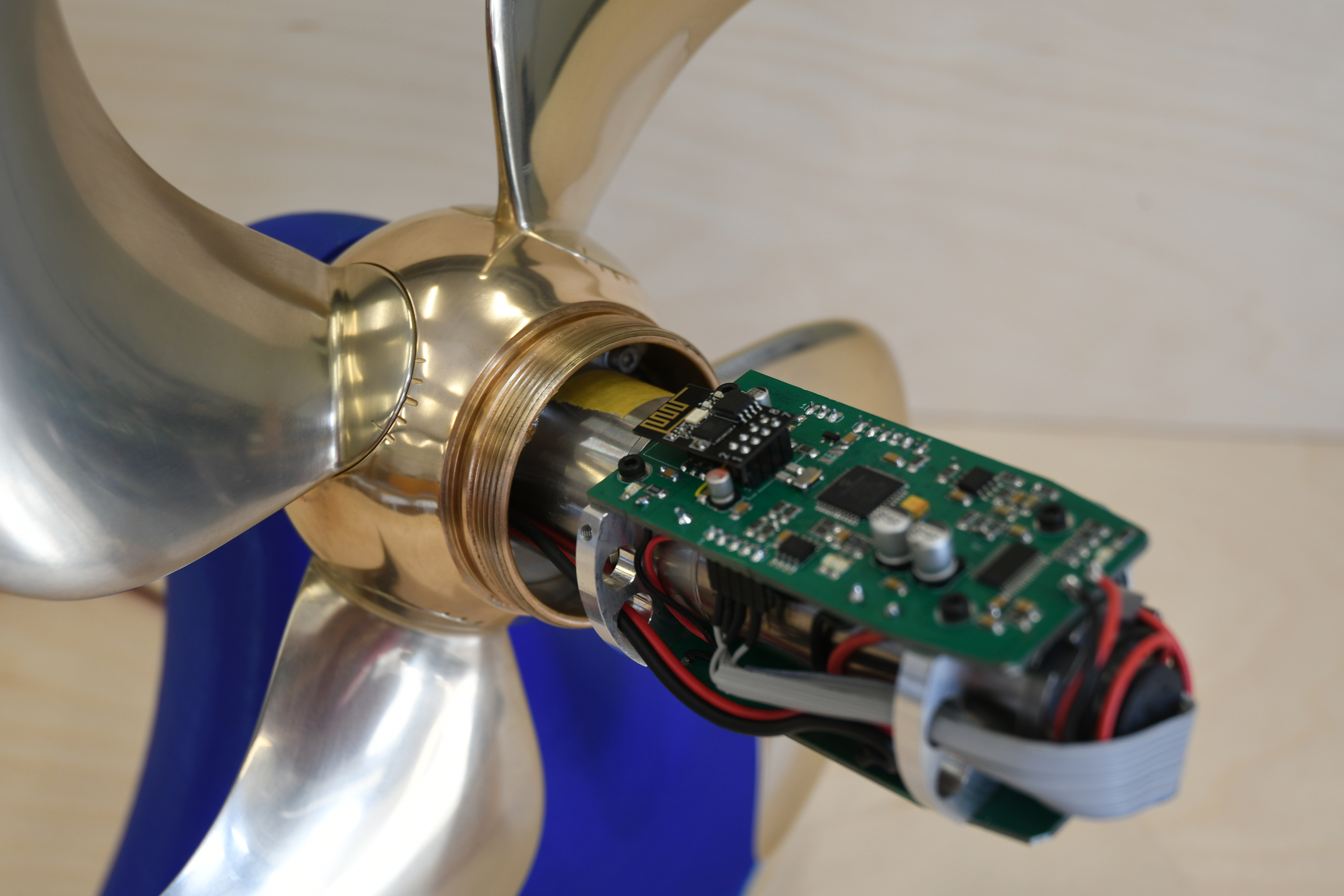 Passionate team
Although the model is still a prototype and hasn’t seen water yet, it has been quite an adventure to get to this point. Vrijdag: ‘Our maritime department has its own workshop and usually doesn’t call upon the Faculty workshop. For this project we made an exception: the components that needed to be fabricated presented a major challenge to all involved. A challenge they’ve met eagerly.’ Thill adds: ‘We’re dealing with complex geometries. The team didn’t hold back on the time they spent, that’s how passionate everyone was.’ The three project leaders are unanimous in their praise for the experts who did the engineering and manufacturing: Schuttevaer himself, instrumentation engineer Frits Sterk, coordinator of the Faculty workshop Jan van Frankenhuyzen and instrument maker Nisse Linkskens. An although the department hasn’t become a regular user of the workshop, a barrier has been removed, according to Thill.

‘The three project leaders are unanimous in their praise for the experts who did the engineering and manufacturing.’

Starting signal for collaboration
Why, one wonders, does the ship building industry lag behind the aviation and wind energy sectors? ‘While aeroplanes and wind turbines are produced in large quantities of identical models, ships are often custom-made and one of a kind. The economy of scale is insufficient to allow systematic studies of innovative propulsion techniques.’ It’s telling that we still heavily rely on research into ship propellers that was done as early as in 1937 by what is now the Maritime Research Institute Netherlands (MARIN). Vrijdag, Thill and Van Wingerden therefore think it is high time to study a new generation of dynamic-pitch propellers. ‘Our cohesion project is the starting signal for the collaboration that will enable this.’

‘It is high time to study a new generation of dynamic-pitch propellers. Our cohesion project is the starting signal for the collaboration that will enable this.’

Dr. Arthur Vrijdag (Dept. Marine and Transport Technology) is assistant professor marine engineering. Before that, he worked a watch officer on the Royal Netherlands Navy and as engineer at Rolls-Royce Naval Marine and Damen Shipyards.