<Amstelveen> 3 October 2018 - Today, the Dutch airline industry presented Minister Van Nieuwenhuizen of Infrastructure and Water Management with a plan of action to make aviation more sustainable. Twenty transport organisations and knowledge institutions have joined forces to accelerate existing developments that will make aviation more sustainable under the “Smart and Sustainable” plan. Their aim is to reduce CO2 emissions from Dutch civil aviation originating in the Netherlands by 35% by 2030. Independent research and consultancy CE Delft has assessed the plan as ambitious and concrete, and concluded that the objectives are entirely achievable.

The airline industry is responsible for 2% of worldwide carbon emissions. The action plan aims to make the Dutch airline industry the smartest and most sustainable sector in the world and comprises a total of seven themes. The plan can serve as input for the ‘so called (Dutch) climate round table’.

Five themes relate to the reduction of carbon emissions from international aviation originating in the Netherlands, resulting in no less than 35% fewer emissions by 2030. This is in addition to the substantial carbon reductions that civil aviation provides through the European trading system and the global UN Emissions Trading System (CORSIA) that give substance to the Paris objectives. Beyond that, there are two themes that will reduce carbon emissions on the ground.

The seven themes of “Smart and Sustainable” are:

Encouraging cleaner aircraft by levying airport fees
Schiphol intends to differentiate airport charges (between 2019 and 2022) partly on the basis of climate impact. Airlines will pay less to use quieter and generally cleaner aircraft, while the costs for noisier, more polluting aircraft will increase.

Introducing sustainable fuel
As a result of the long development time and life span of new aircraft, kerosene-based fuel will remain the fuel of choice for the time being. For this reason, sustainable fuel is one of the most effective ways of reducing CO2 emissions on the relatively short term. These are sustainable biojet fuels made from raw materials that do not compromise human or animal food supplies or which cause environmental damage such as deforestation.

Radical fleet renewal
We have taken major steps to reduce our climate impact by introducing radically new aircraft concepts and fully electrically powered aircraft. The Dutch aviation industry and knowledge institutions are playing an important role in developing new aerodynamic models, stronger and lighter materials, and electric-hybrid propulsion that will be necessary after 2030 to further reduce emissions from aviation. Over the next decade, airlines will continue to renew their fleets, thereby further reducing their emissions.

Deploying international train service and other sustainable means of transport over short distances
The Netherlands benefits from a customer-centric, fast, and sustainable transport system. On some routes, trains are a good alternative to air travel up to a distance of 700 kilometres. The success of the Eurostar and Thalys proves that this is possible and that it is better for the environment. To make train travel even more attractive, we will need faster trains, better connections to Schiphol, and it must be easier to buy integrated AirRail tickets. To further develop Schiphol as a multimodal hub, the extension of the North-South Metro line above ground is another interesting option. This will create space for international trains in the Schiphol Tunnel. And there are sustainable alternatives other than the train that can be further developed for routes with smaller passenger volumes.

Emission-free airports
In 2030, we will ensure that all Royal Schiphol Group airport terminals, offices, and ground operations will be climate neutral. Schiphol already runs entirely on electricity generated by Dutch wind and is making efforts to increase energy efficiency (for instance, by using LED lighting), phase out gas (for instance, by using heat and cold storage), and limit commuting. Airport users (including airlines and handling agents) also play an important role in making the airport climate-neutral by making greater use of electrical equipment and other technology.

A fast and efficient journey to and from the airport
The journey to and from the airport takes time. It can be unnecessarily complicated, cause traffic jams, and contribute to carbon emissions. At present, travellers opt for cars and public transport. Other solutions – electric rental cars and faster public transport to and from airports – are also needed. Furthermore, passengers must be able to make use of reliable and efficient transfers and have more options for getting cargo and baggage from door to door. Also in air cargo transport, all parties work closely with the help of digitisation, chain agreements, and good information exchange to optimise their activities. This will improve lead times and loading rates, and reduce carbon emissions.

The twenty companies and institutions behind the “Smart and Sustainable” plan of action are: 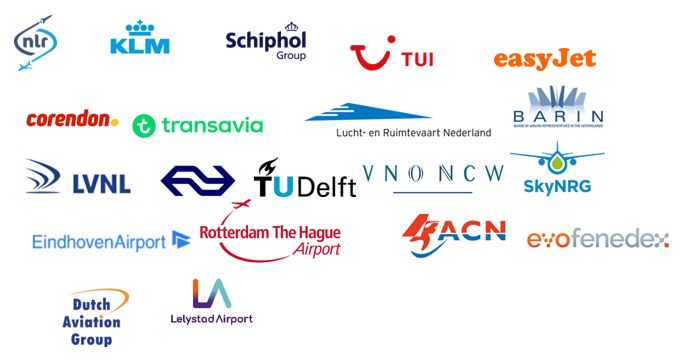 In his inaugural address in April 2018 the Dean of the faculty of Aerospace Engineering Henri Werij appealed to the audience: ‘Let’s start the Clear Sky Revolution’ to make aerospace sustainable once and for all.

Watch back his inaugural address here via Collegerama