This year, BioTech Delft organised the Microbial Physiology and Fermentation Technology course for post-graduates for the 30th time. Last Friday was the final day of this jubilee edition. The course serves as an important link between the industry and the academic world, and Professor Emeritus Sef Heijnen has been involved in it from early on. We interviewed him about the origin of the course and its significance. 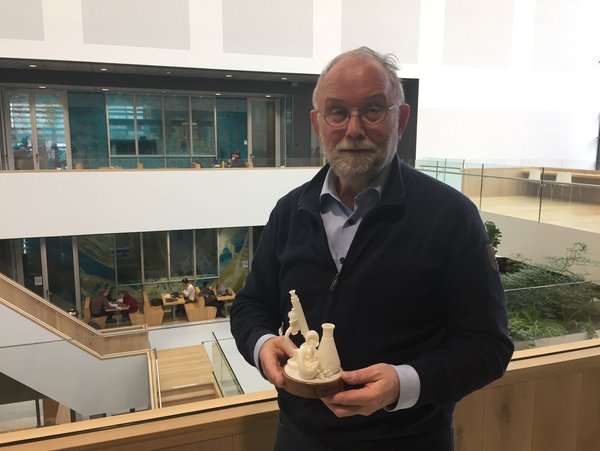 What makes this course special?

'I would say it originated with two renowned professors: Nico Kossen and Gijs Kuenen. They helped lay the foundation of today's Biotechnology department, and helped the department expand from two chairs to six. When Nico Kossen left to work for the industry, Karel Luyben was his successor. Together with Gijs Kuenen, he took charge of the department. Both gentlemen shared the same vision: bringing together microbiology and biotechnology was a must. More specifically, the biotechnologists had to learn a lot more of what the microbiologists knew, and vice-versa. The result was – in my opinion – the brilliant idea to start joint teaching. And that has always been the case ever since. For example, I worked together with Gijs Kuenen for years, and later with Jack Pronk, giving lectures to first-year and second-year students. I took care of the technology and Gijs or Jack handled the microbiological side. To make this joint approach even stronger, they decided to put together an entire portfolio of Advanced Courses. Luyben and Kuenen were the captains of the course that is the subject of our discussion today: 'Microbial Physiology and Fermentation Technology'. The course started in 1987. I joined the department the following year and had the privilege of organising this course for many years.’

Has the course changed a lot since the 1980s?

'For me, it's quite funny looking at the old schedules for this course from the early years. We compiled all of these schedules in a jubilee booklet as part of this celebration. In those early years, we would start around half past eight in the morning and at half past eight in the evening it was not unusual to still have a presentation or an exercise on the schedule. For two weeks in a row. We don't keep such long hours nowadays. Half past five, six o'clock in the evening and that's that. But aside from that, yes, things have also changed in terms of content, of course.’

'Here's just one example: in those days, considerable attention was paid to immobilised enzymes and cells. These days, it's scarcely relevant; from a technological perspective it's outmoded. We conducted loads of process simulations using computers in those early years, too; that was popular at the time. At a certain point they were all but retired. See, in my experience, whenever I did one of those simulation afternoons, first you'd spend hours explaining to the students how the software worked. But then you wouldn't have any time for the actual material, the concepts that were incorporated in the software. Most of all it was a bit of button pressing, and very little understanding. Personally, I think it's important for people to work out a few short calculations on the back of an envelope using insight to get an idea of what something looks like. That art, because it is an art, is what I want to impart to the students. Only then will I let them have a go on the computer.’

So in other words, the course today is nothing like what it used to be?

'That's correct. Given the huge amount of theory in the beginning, at a certain point we decided to also start growing micro-organisms during the course and conducting a fermentation with all of the bells and whistles. Students use it to carry out all sorts of measurements, and we give them exercises, too. The results are projected on a screen and discussed with the students during an interactive afternoon. In addition, we decided to do something more for fun during the course, too, and make a 'Van Leeuwenhoek pilgrimage' around Delft for a few hours. The tour is led by Dr Lesley Robertson, one of Gijs Kuenen's former staff members.’

What type of people tend to take a course like this?

'I always say we have half and half times two. There are people from the industry and from academia. In addition, we have the chemical engineers, or the technologists, and the molecular scientists. That division is always about half and half as well. It makes for the perfect mix of people and ensures that the participants can learn from one another's expertise. That's very valuable because in a process that needs time to percolate you always have to integrate every aspect. You have to talk about the technology, the chemistry, and about the biochemistry, the organisms.’

In short: this course will likely continue to be offered for the next 30 years?

'Well, obviously I won't live forever. Fortunately, I'm in excellent health, so for now I'm available to teach this course. But someone in this organisation will need to feel compelled to take over a few years from now. Undoubtedly there are people in this department who would be delighted, and will also be ready to do so at a given moment. In addition, there is tremendous demand from the outside world. We've had a waiting list in recent years. In fact, we even have people who tell us: "My boss sent me; he took this course 15 years ago and thought it was fantastic." So yes, I am convinced that this course will continue to exist for a long time.’