When you’re about to fall when riding your bike, you steer into the direction of the fall without even realising it. This correction can be explained using the principles of physics; your supports, i.e. the wheels, remain in balance due to the centre of gravity. Now, for the very first time, it has also been scientifically proven that this principle of bicycle stability can also be used to maintain the stability of a hydrofoil, such as the TU Delft Solar Boat. The students recently published their findings in the Naval Engineers Journal, an academic journal published by the American Society of Naval Engineers.

Mathematical model
Foils (or struts) are small wings under a boat, which, provided the boat is travelling at a sufficient speed, can raise the hull out of the water in the same way as an aircraft’s wings lift the hull of an aircraft into the air.Scientists and researchers have been struggling with the challenge of improving the stability of ‘flying boats’ for many years. Students Gijsbert van Marrewijk and Johan Schonebaum have been gripped by this phenomenon ever since they were members of the TU Delft Solar Boat Team in 2013.“We used a mathematical model to validate whether a single-track hydrofoil using two foils one behind the other in the water would remain stable in the same way as we stay upright on a bike,” says Marrewijk.Experimenting with the 2016 TU Delft Solar Boat, designed and built by TU Delft students under the supervision of bicycle researcher Arend Schwab, they showed that the hydrofoil can indeed be kept upright during flight using the principle of steering into the fall. 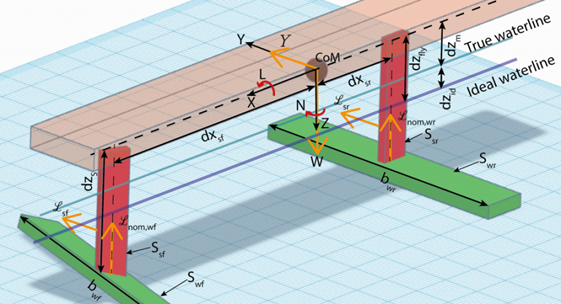 Schematic representation of the TU Delft Solar Boat, with two foils one behind the other.The students used this representation to create a dynamic mathematical model, which can be used to predict the behaviour of all hydrofoils.

Computer simulator
During these experiments, the pilot steered into the direction of the fall and the students recorded things such as speed, altitude and roll angle.“Because steering and keeping a hydrofoil upright is much more difficult than riding a bike, the pilot received intensive training from the students on the Solar Boat team,” explains Schonebaum.But a boat is not a bike; instead of revolving wheels it has small foils under the surface of the water.Not to mention the fact that weight is distributed and carried differently.“It is extremely difficult for a hydrofoil pilot to simply take to the water straight away, which is why we developed a computer simulator to enable the pilot to practice beforehand.”The validated mathematical model was built into this training tool.From now on, the teams will be able to use this model to calculate the stability of new solar boat designs in advance.“Before we developed this model, we would only find out that the boat wasn’t stable enough once we got it onto the water. This simulator will probably save future Solar Boat teams a lot of unnecessary hours of building and frustration,” says Schonebaum.The research has already been put to use in the design of this year's solar boat.The team has expanded the steering system based on these research results, which means that the boat can now turn at a higher speed and with a smaller turning circle.

Publication
Once out on the water, it soon became clear that the low weight of the 2016 TU Delft Solar Boat (100 kg) combined with the innovative steering mechanism meant that the boat was able to achieve top speeds of up to 55 km/h.In 2016, this speed won the TU Delft Solar Boat Team two silver medals; at the solar boat world championships in Friesland and at the Monte Carlo Cup in Monaco. But this is the first time there has been any scientific evidence to support this stability mechanism.“It’s fantastic that these students have been able to demonstrate with this research paper that a pilot can sail a boat much like we ride a bike,” says Schwab.“And it’s not every day that research carried out by Master’s students is published in an academic journal.”

More economical
“Being published is great, of course, but more importantly, this new knowledge into how hydrofoil technology works can now also be used to make shipping more sustainable in the future,” says Marrewijk. Traditional boats always needed several foils to raise the boat out of the water without losing balance. “Just like stabilisers keep a bicycle upright when children are learning to ride,” explains Marrewijk. A boat that is lifted out of the water in this new way needs fewer foils and therefore faces less water resistance, which makes sailing much more economical.“The resistance involved here can be compared with that of a human hand gliding through the water,” according to Marrewijk. “Follow-up research is needed to find out exactly how much more economical that could be for a bigger boat, but we expect that shipbuilding companies will certainly be interested in this principle for keeping hydrofoils upright during flight.”