Researchers at QuTech in Delft have succeeded in generating quantum entanglement between two quantum chips faster than the entanglement is lost. Entanglement - once referred to by Einstein as "spooky action" - forms the link that will provide a future quantum internet its power and fundamental security. Via a novel smart entanglement protocol and careful protection of the entanglement, the scientists led by Prof. Ronald Hanson are the first in the world to deliver such a quantum link ‘on demand’. This opens the door to connect multiple quantum nodes and create the very first quantum network in the world. They publish their results on 14 June in Nature.

By exploiting the power of quantum entanglement it is theoretically possible to build a quantum internet that cannot be eavesdropped on. However, the realization of such a quantum network is a real challenge: you have to be able to create entanglement reliably, 'on demand', and maintain it long enough to pass the entangled information to the next node. So far, this has been beyond the capabilities of quantum experiments.

Scientists at QuTech in Delft have now been the first to experimentally generate entanglement over a distance of two metres in a fraction of a second, 'on demand', and subsequently maintain this entanglement long enough to enable -in theory- further entanglement to a third node. ‘The challenge is now to be the first to create a network of multiple entangled nodes: the first version of a quantum internet’, professor Hanson states. 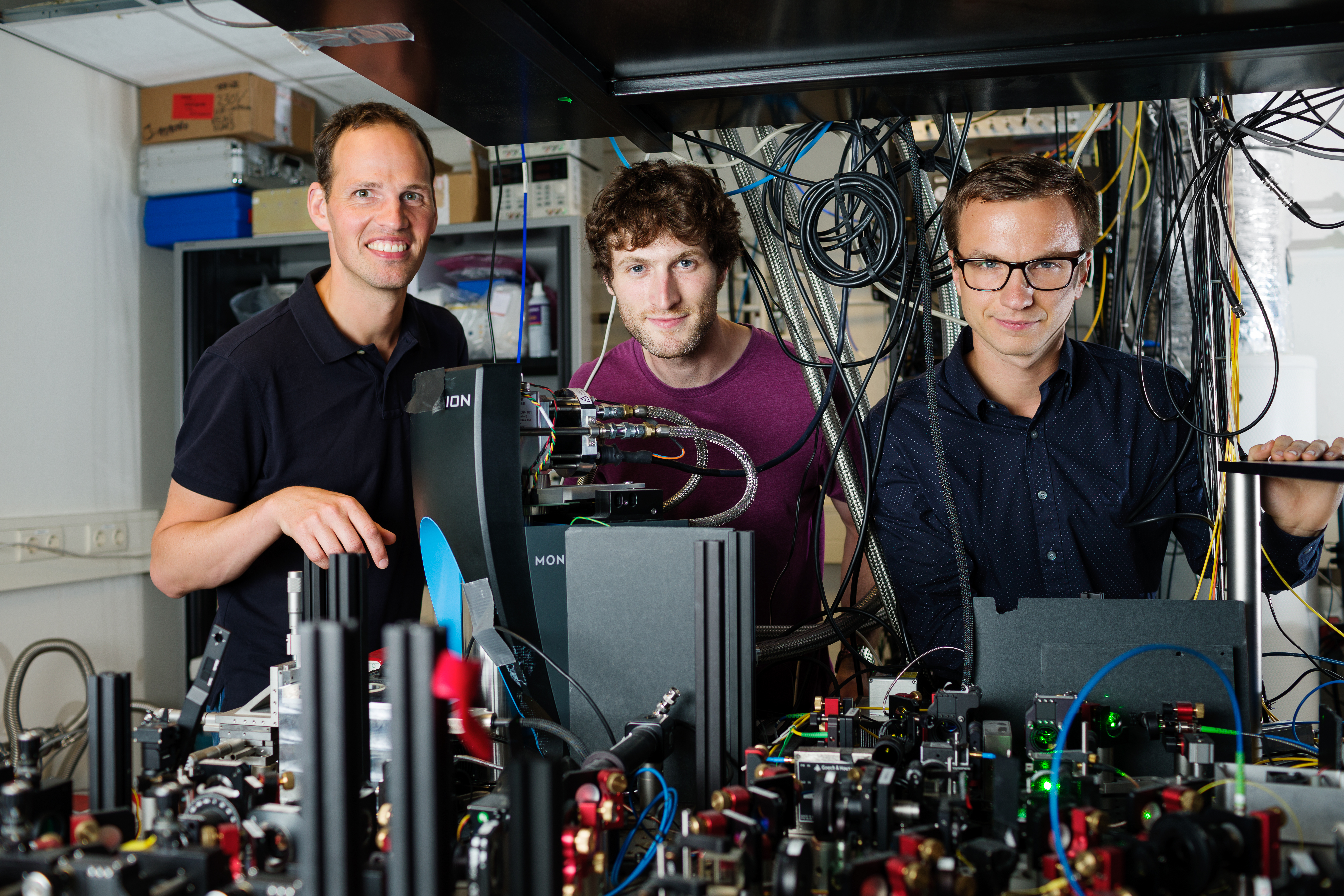 Researchers from QuTech in Delft working on the ‘entanglement on demand’ experiment’. The pictures show prof. Ronald Hanson, dr. Peter Humphreys and dr. Norbert Kalb, all from the group of prof Ronald Hanson of Delft University.

In 2015, Ronald Hanson's research group already became world news: they were the first to generate long-lived quantum entanglement over a distance (1.3 kilometres), , allowing them to providefull experimental proof of quantum entanglement for the first time. This experiment is the basis of their current approach to developing a quantum internet: distant single electrons on diamond chips are entangled using photons as mediators.

However, so far this experiment has not had the necessary performance  to create a real quantum network. Hanson: 'In 2015 we managed to establish a connection once an hour, while the connection only remained active for a fraction of a second. It was impossible to add a third node, let alone multiple nodes, to the network.’

The scientists have now made multiple innovative improvements to  the experiment. First of all, they demonstrated a new entanglement method. This allows for the generation of entanglement forty times a second between electrons at a distance of two metres. Peter Humphreys, an author of the paper, emphasises: 'This is a thousand times faster than with the old method.’ In combination with a smart way of protecting the quantum link from external noise, the experiment has now surpassed a crucial threshold: for the first time, entanglement can be created  faster than it is lost.

Through technical improvements, the experimental setup is now always ready for 'entanglement-on-demand'. Hanson: 'Just like in the current internet, we always want to be online, the system has to entangle on each request.’ The scientists have achieved this by adding smart quality checks. Humphreys: 'These checks only take a fraction of the total experimental time, while allowing us to ensure that our system is ready for entanglement, without any manual action'.

The researchers already demonstrated last year that they were able to protect https://qutech.nl/one-step-closer-to-the-quantum-internet-by-distillation/a quantum entangled link while a new connection was generated.  By combining this and their new results, they are ready to create quantum networks with more than two nodes.  The Delft scientists now plan to realize such a network between several quantum nodes. Hanson: 'In 2020, we want to connect four cities in the Netherlands via quantum entanglement. This will be the very first quantum internet in the world.’

This work was supported by the Netherlands Organisation for Scientific Research (NWO) through a VICI grant and by the European Research Council through a Starting Grant and a Synergy Grant.

Publication:
Deterministic delivery of remote entanglement on a quantum network