Calvin Rans, assistant professor in the Faculty of Aerospace Engineering (AE), has been chosen TU Delft’s Best Lecturer of 2018. He is well known as a very approachable and engaged lecturer, who asks students for feedback in order to further improve his lectures. His students are highly enthusiastic about the courses he lectures on: his first year course Mechanics of Materials is taught in a blended way, linking in with students’ questions, and he manages to make the ‘tough’ second-year course, Structural Analysis & Design, interesting partly by using examples that bring the theory to life.

Blended
Mechanics of Materials, a first-year course, is one of the faculty’s first courses to be offered in blended form. Students watch videos explaining the subject matter at home and are given an explanation on the more difficult areas during the tutorial or lecture, leaving more time to work on exercises. Students really appreciate this approach, especially because Rans uses numerous examples to place the theory in the right context. Rans (who comes from Canada) even gave a lecture dressed in an ice hockey kit, so he could use the tensions felt on a hockey stick when hitting the ball hard as an example.

Engaging examples
This year, Rans also took on the second-year course in Structural Analysis & Design, in which he aims not only to teach his students the theory, but also how to develop design intuition. In his lectures, he emphasises the fact that there is no right answer in design and that students must learn to be critical and make the right judgements and decisions during the design process. Although the structure of the course has remained unchanged, his calm approach and use of engaging examples enables him to deftly guide students through what is often quite heavy subject matter. The success of his approach is demonstrated by the increase in the pass rate.

Digital resources
Alongside the use of examples and his ability to present theory in its context, students appreciate his use of digital resources. In addition to blended videos, he also uses quad screens during lectures, in order to place the theory and exercises literally side-by-side. This year, he also experimented with ‘ANS’, the online exam assessment system developed at TU Delft. Students value the extensive feedback they gain from it, giving them a better understanding of what was wrong.

Elected by students
At the end of the last academic year, Rans was named Best AE Lecturer and was nominated by the VSV 'Leonardo da Vinci’ study association for the TU Delft Best Lecturer Election, in which all eight faculties complete. A judging panel made up of Vice-President of Education Rob Mudde, members of the Student Council, the Study Associations Council and last year’s winner, chose TU Delft's Best Lecturer from the eight lecturers nominated. The winner goes on to compete for the national title of Lecturer of the Year organised by the Dutch National Students Association (ISO), the results of which will be announced on 13 April 2019. 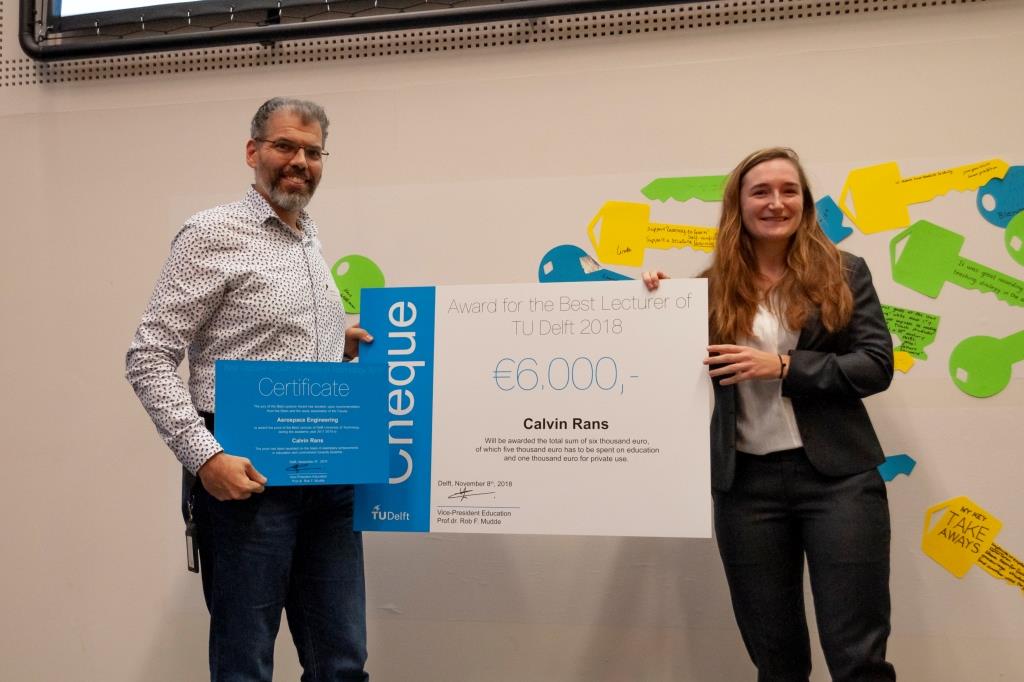 Anne-Kee Doing, chair of the Student Council, hands over the cheque and certificate ‘Best Lecturer 2018’ to the winner Calvin Rans.

The judging panel very much valued his integrated approach, in which he brings together education, research and the business community. By doing so, he aims to create an environment in which students can be part of a network in which they are visible and have the potential to develop. 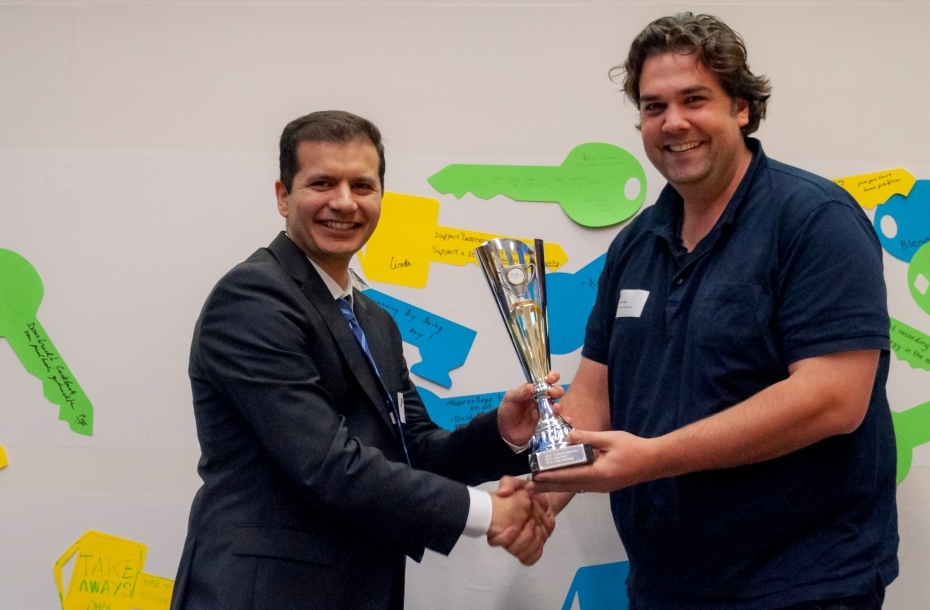 TU DELFT LECTURER OF THE YEAR 2018