Both a technological and a societal challenge

To create energy-neutral cities, we need to fundamentally change how we live in our cities. The City-zen Roadshow helps to understand that it is necessary to look at sustainability from both a technological and a societal perspective. The tenth Roadshow, organised in Amersfoort, once again shows how the project creates awareness by connecting citizens, legislators, and market players with students and experts.

City-zen is a major international project, funded by the EU as part of the Seventh Framework Programme. Over the past five years, the project has intended to create innovations that result in a reduction of CO2 emissions of 59.000 tonnes per year and future-proof infrastructure. The Roadshow element of City-zen has been developed at the Faculty of Architecture and the Built Environment of TU Delft. This collaboration with local authorities, citizens and market players opens up the hearts and minds of people to the necessary innovations proposed by City-zen. “Sustainability is a huge word. How do you get people to open up to new ideas on lifestyle and their city, their daily life? That is what the Roadshow is designed to do. We created a methodology to gain trust from people we do not yet know, but who are the ones who are using the city that our design team visits,” explains research leader Craig Martin.

The Roadshow combines research and education to bring together different people, with different agendas, backgrounds, and levels of knowledge. Martin: “We try to engage with anyone who has the future of their city in mind, in terms of a carbon zero, happier, and healthier lifestyle.” Since the start of the project, the Roadshow has visited ten different European cities: Amsterdam, Belfast, Izmir, Dubrovnik, Menorca, Roeselare, Preston, Nicosia, Sevilla, and Amersfoort. “Most of the cities we visited are big, globally known cities. Amersfoort is smaller, but many people within the city and the municipality are already actively working towards creating a more sustainable city. We received an invitation to visit and help them along,” tells Martin. The invitation was extended by Jo Pieters, who lives in the Binnenstad [city centre] of Amersfoort. He is the project leader of a team within his neighbourhood, representing owners of over 300 apartments and seven owners’ associations. Pieters: “We aim to not just make our homes more sustainable, but to create a more sustainable environment in our entire neighbourhood. Speaking with professor Andy van den Dobbelsteen brought us to City-zen Roadshow. We were so enthusiastic about the project, we immediately contacted alderman Astrid Janssen to discuss possibilities for bringing the Roadshow to Amersfoort.”

The municipality of Amersfoort aims to be CO2-neutral and without waste by 2030. The city works towards its goals through energy transition, a circular economy, sustainable mobility and air quality, and biodiversity and climate adaptation. Alderman Astrid Janssen elaborates: “Many projects already work towards creating a sustainable city. The City-zen Roadshow was a good opportunity for us, allowing us to gain fresh perspectives and inspiration, but also an acceleration towards reaching our goals.”

SWAT studio
Before each five-day visit of the Roadshow, the SWAT studio visits each city. During SWAT, students from the Building Technology track of the Architecture, Urbanism and Building Sciences master visit the city for two continuous weeks. Their aim is to become citizens, to truly understand the place and its potential. Martin: “SWAT is a pre-event and offers a pre-diagnosis of the site. While the students work, people are already brought in to watch and give feedback. This gives us the opportunity to get to know the people of the city before the Roadshow starts. The students also venture out on the streets. People see them working hard and sincere, without a political agenda. It makes them willing to meet you halfway. That is why this education element is such an important element.”

During the SWAT studio in Amersfoort, twenty Dutch and international students became citizens of different neighbourhoods: Binnenstad, Hoogland, and Amersfoort Zuid. Javier Montemayor Leos was part of the Binnenstad team. Asked about his experiences, he says: “We started with a desk study to get to know the city. Then we went to live within the neighbourhoods for two weeks, identifying needs and coming up with possible interventions. In this period, it was really nice to hear from the citizens themselves. Many of them were already familiar with energy efficiency solutions, but they wanted to go beyond those, towards innovative changes. Building Technology can be very technical, but this project reminded us that everything we do has a purpose. Our designs are meant to benefit people, merging social needs with the more technical part of sustainability.” 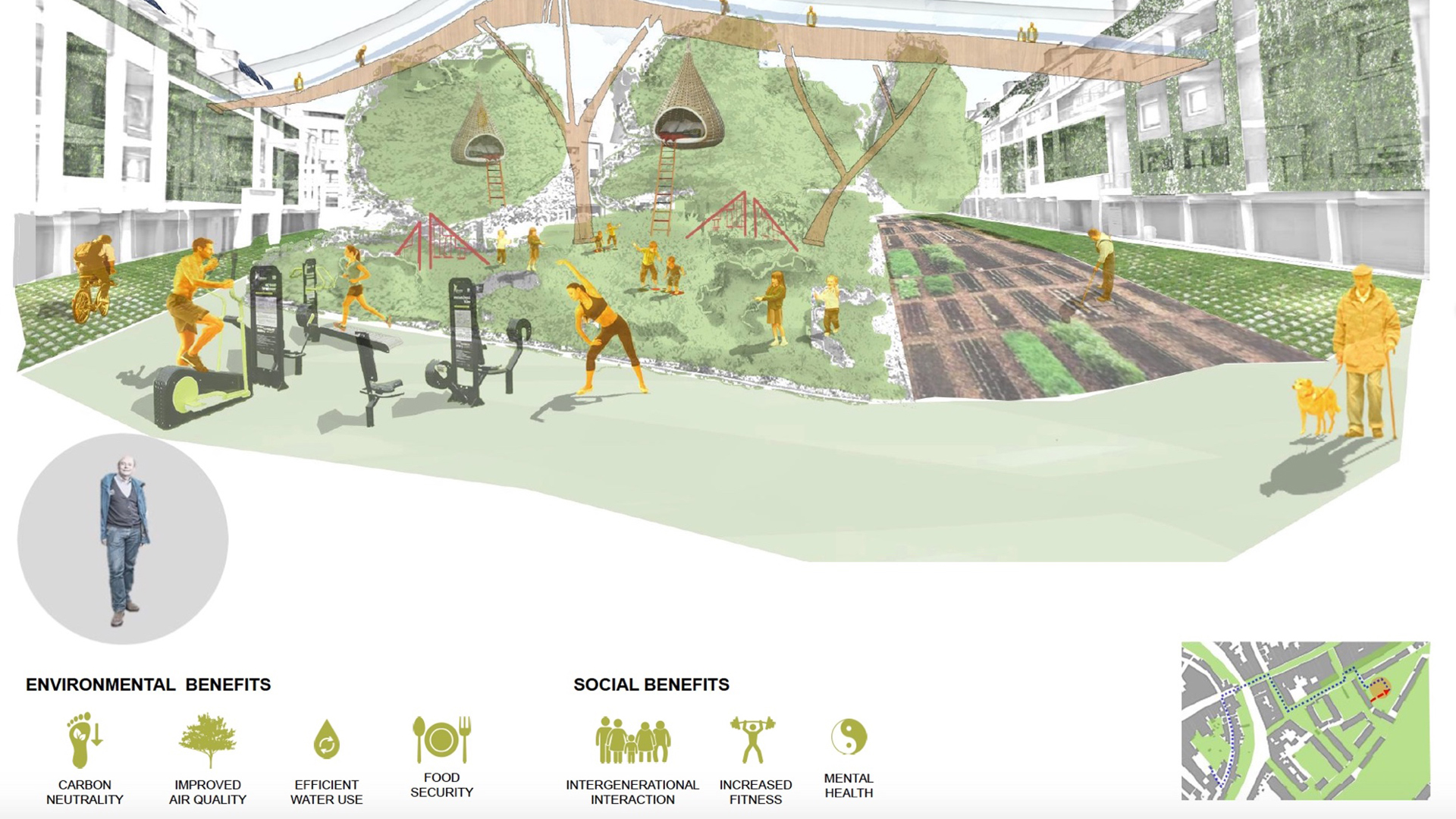 Roadshow
During the roadshow, different experts on urbanism, energy transition, and sustainable design go into the city and create a diagnostic. From these site visits and talks with locals, interventions are proposed. Martin: “This is where academia meets reality. The stakeholders greeted the fairly radical ideas of the SWAT studio with enthusiasm, understanding what the students’ ambitions were. This provided us the necessary build-up for the radical ideas presented during the Roadshow. We for example proposed to move the train station of Amersfoort to a different location. This would allow for a drastic improvement in the use of public transport to reach the city centre. That seems a large investment now, but how much would it cost if you do not do it? A future scenario without change is not favourable nor affordable. The proposed solutions also show how sustainability is not purely a technical challenge. It is a social one. If we show the technical solution and the added social value, people become invested.” 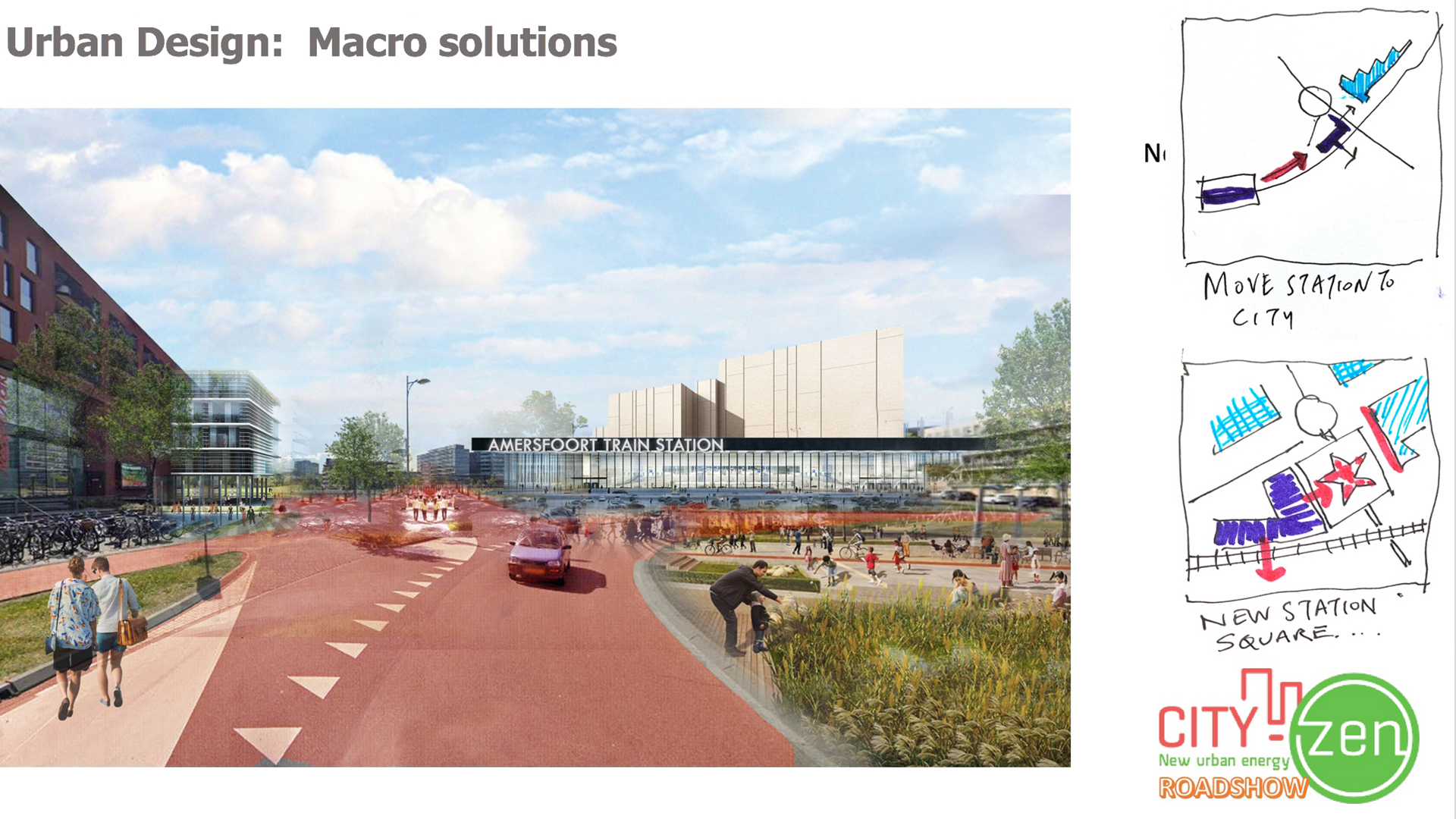 Proposal to move the station to the city, giving a macro solution to improve the urban design. Image by City-zen Roadshow

Beyond City-zen Roadshow
The stakeholders agree that this realisation, sustainability being a societal challenge, is the most important outcome of the Roadshow. Pieters: “We tend to look for technical solutions, without realising the ultimate goal of creating a better environment. As citizens, we want to know how our neighbourhoods could improve, with more green, better air quality… That is what makes people exited. That is also what the Roadshow really delivered: very good out-of-the-box ideas, not just for our homes, but for the people and the environment. This is why our project team is now more focussed on the impact of our project on the neighbourhood and the people living in it.”

The phase after the Roadshow is when the ideas have to be implemented. The municipality is already actively working towards this, expresses alderman Janssen: “We are making an overview of the ideas, testing the possibilities for actual application. Fortunately, the Roadshow confirmed we were already working on aspects that will really make have an impact. Additionally, the importance of the societal aspect of sustainability became abundantly clear. Not just through the proposed solutions, but also seeing how many of our citizens are already actively working towards a more sustainable city. That was both inspiring and making me proud of our city.”

Craig Martin continues the research on different levels, introducing the SWAT methodology to the other partners of the City-zen project. Martin: “The Roadshow has looked at technical aspects of sustainability in each city. However, the main lesson learned: the societal aspects are equal, if not more important for the creation of sustainable cities. Trust is a key element in being able to talk about societal challenges. The Roadshow team does not have a political nor a commercial agenda. That is one of the success and unique aspects of the project. We provide open source data and ideas, but also leave the city at some point. The stakeholders can use these ideas to work with, without us benefiting from it. In Roeselare, this has for example resulted in several start-up companies that have been fast-tracked.”
Student Javier Montemayor is interested to see how the Roadshow will further develop, too. “I am interested to see which ideas might be implemented. The SWAT studio and the Roadshow taught me that I want my projects and designs to be rooted in something larger, in reality. These types of projects are important for students, to see the implications of our work as designers. We need to learn how our design will affect and benefit communities.”