What is the most effective way for an organisation to make decisions about real estate that best match the organisation’s needs? Monique Arkesteijn investigated existing methods and developed a model in which stakeholders’ preferences lead to the best option. Her research offers corporate real estate (CRE) managers a fresh approach to decision-making.

Several methods are currently used to make sound decisions about a CRE portfolio. They are aimed at shareholders or try to involve various stakeholders, from directors to users. The first group is primarily concerned with the financial or firm value. The second group is also focused on other values, which are also measured in different ways, according to Monique. “In our field, it’s not just about tangible things. The value of a building or a space has as much to do with the atmosphere as with the bricks. But in practice you see that one interest, for example the cost or the need for square metres, gradually comes to dominate the decision-making process and other interests fall by the wayside.” Decision-making is also implicitly influenced by the priorities made by the responsible manager or designer. “That’s why I looked for a way to include all types of values, including those which are subjective, in the decision-making process in a comparable way, and to let stakeholders themselves design alternative CRE portfolios to identify the best solution. That is a new approach.” 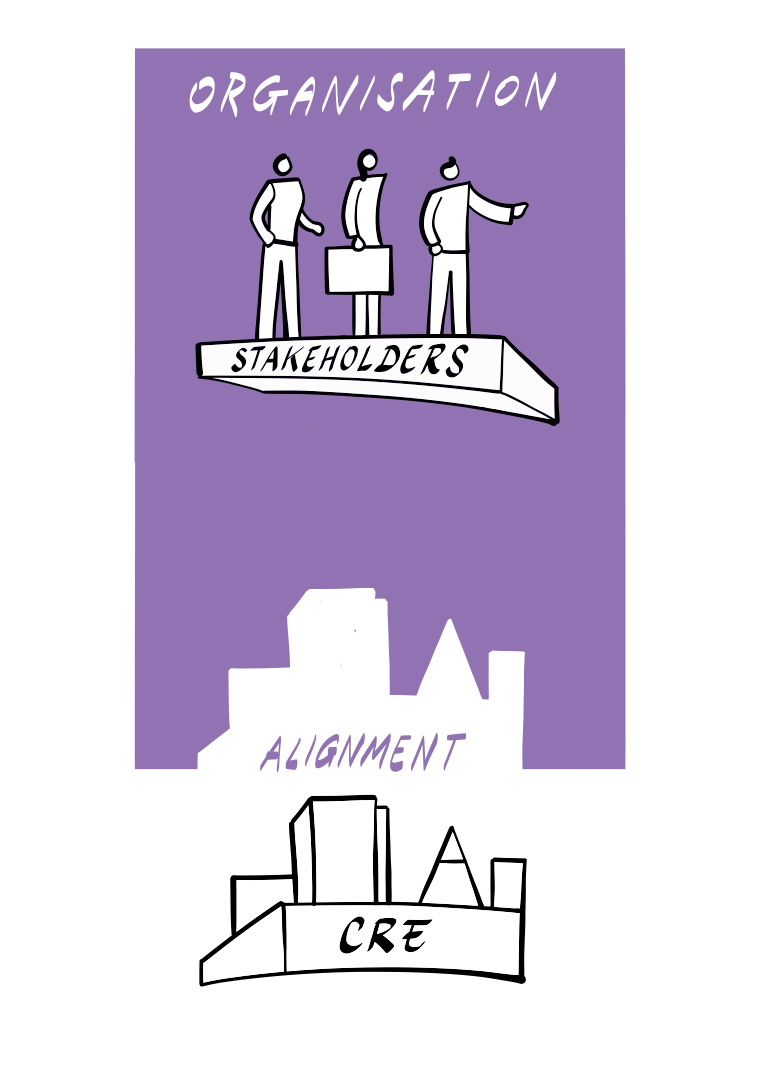 Value = preference
For her design and decision-making model, Monique combined fifteen elements from three disciplines: design, decision-making and management. It all starts with a question or a problem. For example, how can all catering facilities contribute to the living university campus? All stakeholders, from the Executive Board to the Student Council, were asked to identify goals and variables and then to assign a value (preference) to them. This is a six-step process. The stakeholder usually comes up with more abstract goals, such as the accessibility of a facility, and the manager or a designer formulates this into something more specific. “I asked all stakeholders to explain what good accessibility is and they translated that into the desired walking distance in minutes. This produces very clear stakeholder preferences.” In the end, the result is a single, integrated preference score – but we also know how the various stakeholders scored each criterion.

Design
In the fifth step, stakeholders can design alternatives for the existing corporate real estate portfolio. “During two workshops, they use a digital map on which they can perform all kinds of interventions by clicking on a specific building.” At each design step, they can see how the preference score changes. A key element is that stakeholders can change or confirm their input throughout the process.

Designing is not only a group process but also a learning process, says Monique. “By designing together, the various stakeholders understand that the requirements they initially set do not always reflect what they have in mind. They are beginning to realise that not everything can be done just like that and that other interests are also valuable.” In other words, priorities are set and differences are resolved along the way. “The process stops when everyone agrees with each other, resulting in an optimal alternative to the current situation.”

Guinea pigs
Monique tested the method in three pilot projects: two at TU Delft and one at the ICT company Oracle. “For the case study on food facilities on campus, the added value of the preference-based strategy was 54 (out of 100) compared to the current situation.” What do the guinea pigs themselves think? “They especially appreciated the ‘learning by doing’ aspect,” says Monique. She hopes that her research will lead to the development of an accessible user application for the first, generic phase of the process. “An app or a web­-based tool that can easily be used by many parties.”