The Human Power Team, a student project from the Delft University of Technology and Vrije Universiteit Amsterdam, has today presented their new design of their newest aerodynamic recumbent bicycle: the VeloX 9. With this bicycle they will attack the world speed record of 121.8 km/h this September in Nevada. 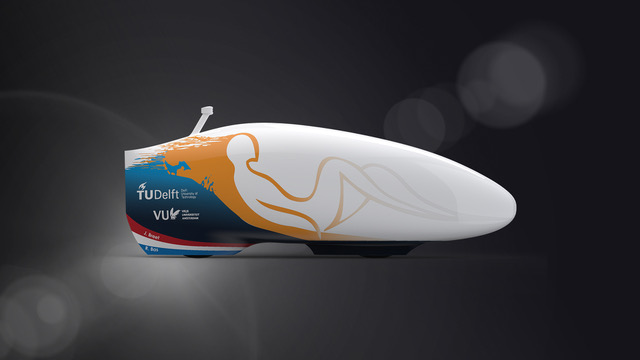 The Human Power Team has optimized the design of the VeloX to be able to cycle as fast as possible. It has, among other thing, no windshield. “A windshield adds a small edge to the shape, which results in a change of the airflow from nice, laminar flow to turbulent.”, explains Tomas Gast, the Chief Engineer of the team. “This leads to high additional resistance at high speeds. That is why we completely remove the window and replace it with a small camera at the top-back of the shell.”

Besides that, the VeloX is made of super lightweight materials and on top of that made as small as possible to limit the air resistance. To save space, a custom gear shift system is developed where the cassette moves instead of the drive chain. Furthermore, the VeloX will ride this year using special developed tires leading to the lowest rolling resistance.

Women’s record
In September 2019 the team will participate in the women’s classification of the World Human Powered SPeed Challenge (WHPSC) in Nevada, United States. “In the town Battle Mountain there is a straight road of 10 kilometers long: long enough to build up speed, to sprint and to brake.” tells Britt Krabbenborg, the Team Manager of the Human Power Team. “The air is thinner thanks to the location at 1400 metres height, which leads to a lower air resistance: ideal for a record attempt.”

The VeloX is specifically designed for the two female athletes: Jennifer Breet and Rosa Bas. Jennifer was also part of the team previous year where she won second place during the WHPSC. With her experience and enthusiasm she will try to reach the ultimate goal: a world record. Rosa has been rowing on a high level until recent summer and even rowed at the World Championship. She will as well aim for a world record during the race.

The Human Power Team
The Human Power Team is a student team that since 2010 strives to push the limits of human and technical potential. This is achieved by building an extremely aerodynamic recumbent bike and training two athletes. The team consists of 16 students from the Delft University of Technology and the Vrije Universiteit Amsterdam who take a gap year to reach their ultimate goal: set a world record.