On the 10th of September, The Human Power Team, made up of students from TU Delft and VU Amsterdam, broke the women’s world speed record for cycling. Athlete Rosa Bas reached a speed of 122.12 km/h, breaking the old record that stood at 121.8 km/h. The students have constructed their own aerodynamic recumbent bike to take part in the World Human Powered Speed Challenge, taking place until 14 September in the Nevada Desert in the USA.

122.12 km/h
“We’ve been working towards this moment for a whole year, and now we’ve done it,” says athlete Rosa Bas. “Biking this fast is extraordinary. I went faster than cars are normally allowed to drive.” By reaching a speed of 122.12 km/h, the athlete from the Human Power Team broke the previous world record of 121.8 km/h set by French woman Barbara Buatois in 2010. “It's great to finally break this record, which has stood for nine years,” says Britt Krabbenborg, Team Manager of the Human Power Team. “Every year, athletes from all around the world have tried to beat Buatois’ time. And after months of designing, producing and training, we were finally the ones to do it.”

Meanwhile, the world championships are over, and French Ilona Peltier from the Annecy University Institute of Technology holds the record with a speed of 126,52 km/h. Jennifer Breet, the Human Power Team’s other athlete, could not break this record either. Nevertheless, the team looks back at a successful week. “Our goal was to break Buatois’ record and we’ve accomplished that”, explains team manager Britt Krabbenborg. “It is remarkable that after 9 years the record is broken multiple times. We are proud of all the innovation within this top-level sport.” Next year a new team of students will start with a new challenge. They are aiming to break the men’s tandem world speed record with their self-built tandem. 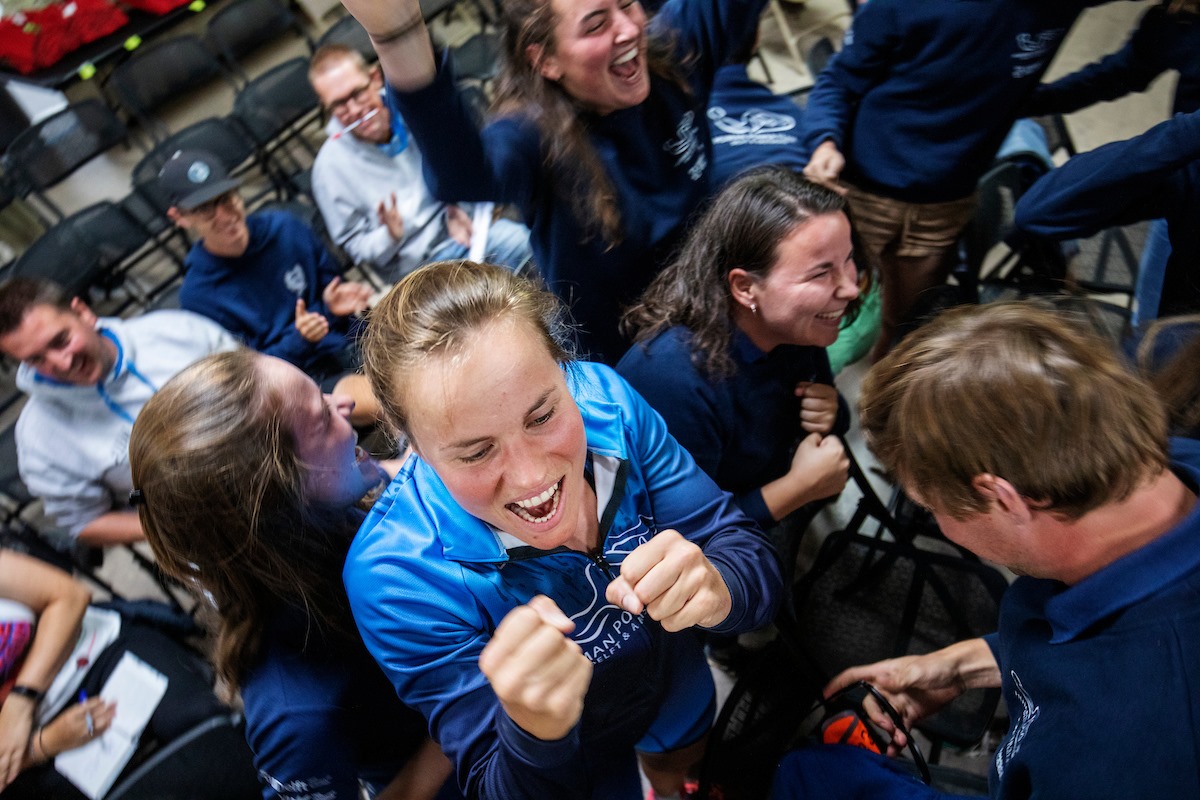 World Human Powered Speed Challenge
The Human Power Team takes part in the World Human Powered Speed Challenge every year. The Challenge is the world championship for human-powered vehicles, and takes place in the Nevada Desert in the United States. “You can't achieve speeds like this in the Netherlands,” explains Krabbenborg. “The championship is held in Battle Mountain, where there's a 10-kilometre stretch of straight road. It's long enough to build up speed, make a sprint and then slow down again. The altitude of 1,400 metres means that the air is thinner than in the Netherlands, lowering the air resistance and allowing us to cycle even faster.”

The Human Power Team and various other student and non-student teams from around the world have until 14 September to break the new world record. The other athlete from the Human Power Team, Jennifer Breet, who has already reached a speed of 105.54 km/h, and athletes including the Italian Vittoria Spada from the University of Turin, will all do their best to break Rosa Bas’ latest record.

Minimal resistance
“Air resistance is our greatest enemy at high speeds. This is why the shape of the aerodynamic shell of our bike, the VeloX 9, is such an important factor in reaching our top speed,” explains Bart van de Krol, the team's Aerodynamics Engineer and an aerospace engineering student. “We’ve designed the shape as closely as possible around the bodies of our athletes to keep the bike as small and streamlined as possible.” In addition, the VeloX 9 is made of lightweight materials and uses an innovative gear system in which the sprockets move instead of the chain. This means the chain maintains a straight line and so is subject to less friction than in a standard bike. This year the VeloX 9 has also been fitted with tyres designed especially for the team, to ensure the lowest possible rolling resistance. 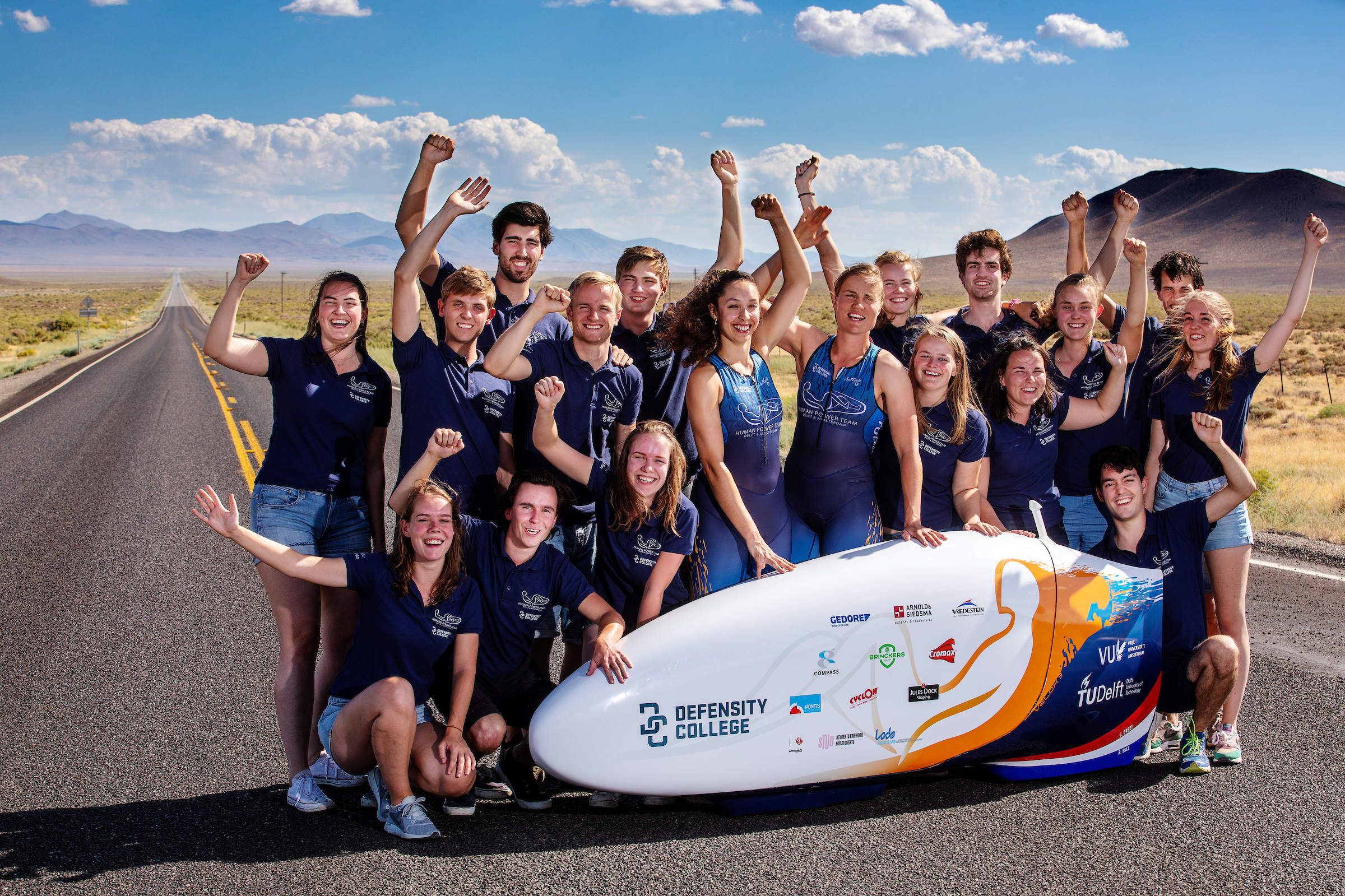 Pure muscle power
The Human Power Team is a partnership between students from Delft University of Technology and VU University Amsterdam. It comprises 16 students, all of whom set their studies aside for one year to work on the project. “The design is not allowed to use electric power or a fuel engine,” explains Krabbenborg. “So it’s all muscle power cycling. Our athletes have to be on top form. The coaches and athletes have been in the United States since August to allow them to acclimatise to the altitude and temperature. This is the best preparation that the athletes could have for the championship. In addition, this year we used a new representative exertion test, the 3-minute all-out test, which measures both sprint and endurance capacity. And the athletes’ diet was aligned perfectly with their training schedules.”

Since 2010, the Human Power Team Delft & Amsterdam has been designing and building high-speed recumbent bikes to take part in the World Human Powered Speed Challenge. Last year, the team became world champion but narrowly missed the world record with a speed of 119.5 km/h. The team will spend the next few days trying to break its own new world record. te verbeteren.