The magic of multi-functional Photovoltaic Windows

Yuan Gao has developed two brand new approaches to bring multi-functional photovoltaic (PV) windows to the next level. These innovative windows can not only convert solar energy into electricity and therefore power the local loads in buildings, they also can manipulate the building interiors in terms of daylighting, cooling and glare protection. This approach is based on using opaque PV shading elements and the second one based on semi-transparent PV (STPV) glazing window combined with a polymer-dispersed liquid-crystal (PDLC) film. 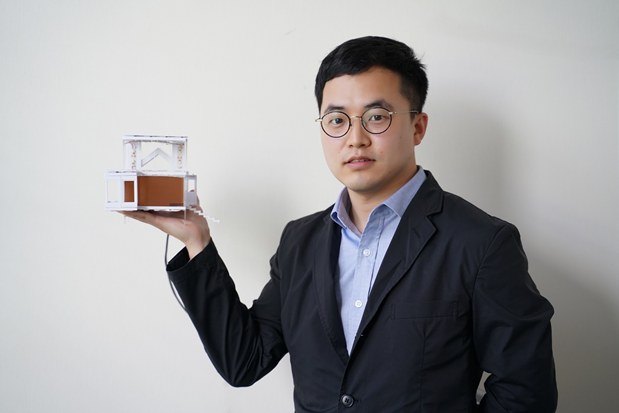 Globally, more than one third of energy consumption is attributed to the building sector. Since modern buildings contain more glazing area, a great amount of solar energy is incident on the window area of tall buildings. This solar energy can be used for electricity generation and for powering energy consumption in buildings. Current multi-functional interior PV shading elements suffer from partial shading problems when using conventional sun-tracking methods. Yuan solved this problem by introducing novel sun-tracking methods so that mutual shading is avoided when keeping the elements at a magic tilt angle. This angle depends on the sun’s position, which is known for a specific location, date, and time. In addition to the maximum electricity generation, the optimized sun-tracking method results in balancing energy performance of the building in terms of electricity generation and consumption by artificial lighting, heating and cooling.

In the second approach Yuan has developed thin-film based elements which can not only harvest solar energy but also switch between a semi-transparent and frosted state. Yuan has designed and fabricated semi-transparent amorphous silicon solar cells that deliver enough electricity to power a Polymer Dispersed Liquid Crystal (PDLC) film attached to the full area of the cell. The PDLC film can switch from opaque to transparent state in a second by applying voltage to the film generated by the cell. With this combination, the amount of sunlight in the interior can be controlled without consuming extra electricity from the grid.

Besides building applications, these PV windows can be used in any application that requires light transmittance and power supply, such as electric vehicles, aircrafts, billboards, and even mobile phones. Applications of PV windows could be beyond imagination.