At Eurographics, the 40th annual Conference of the European Association for Computer Graphics hosted in Genoa Italy, the team effort of the Computer Graphics and Visualization (CG&V) section at Delft University of Technology in collaboration with Leiden University Medical Center won both first and second place of the Dirk Bartz Prize for Visual Computing in Medicine 2019 (Eurographics Medical Prize).

The Eurographics Association organizes a biannual competition to acknowledge the contribution that computer graphics and visualization research is playing in the medical field, and to encourage further development. An international jury of experts award and recognized the following two distinct projects as the most relevant work among all submissions to the prize. 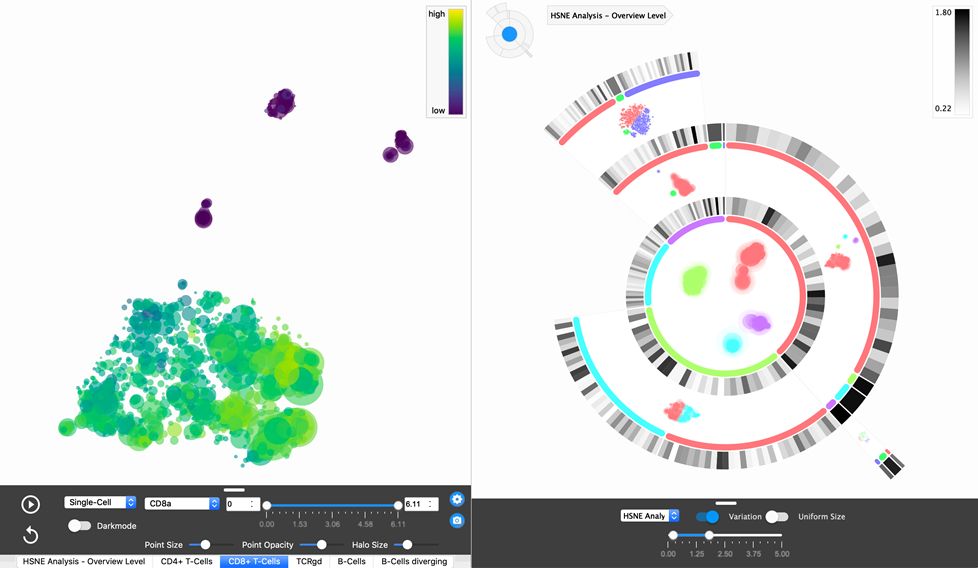 Detailed knowledge of the cellular composition is of interest in immunology. Among others, knowledge on cells can indicate the causes of immune diseases, such as Crohn's disease, or help in the development of vaccines. New measurement techniques allow acquiring large amounts of detailed information on cells. Understanding this high-dimensional information is essential to facilitate new discoveries. The group developed novel algorithms and visual analysis strategies for the exploration of the large single-cell datasets in a way that was not possible before. Cytosplore enables efficient visual data analysis and has led to several discoveries alongside high-impact publications.

Anatomy, or the study of the structure of the human body, is an essential component of medical education and practice. Certain parts of human anatomy are considered to be more complex to understand than others, due to a multitude of closely related structures. Some aspects of individual anatomy, such as the autonomic nerves, are not visible in individuals through medical imaging techniques or even during surgery, placing these nerves at risk for damage, generating undesirable severe side effects. The group employed 3D model-based techniques to represent anatomy in individual patients not visible from imaging. The visualization strategies allow the exploration of the areas at risk for surgical planning. Their educational tool to better understand complex anatomy is in use in a Massive Open Online Course (MOOC) on anatomy, which had over 41.000 participants worldwide until now.