The number of drones in our airspace is rising rapidly, which is why it is important that drones are properly registered, identified and tracked. In this light, European partners will be visiting the TU Delft campus on Tuesday 2 July to test a new system designed to ensure that drone air traffic can safely participate within the total air traffic network.

‘It would be hard for anyone to miss the fact that the number of drones is on the rise,’ says Bart Remes, drone researcher from TU Delft’s Micro Aerial Vehicle Lab (MAVLab). ‘However, rapid technological developments mean that drones are also changing. Drones can not only do a lot more, they are also becoming more autonomous, which is an area into which the university is conducting a great deal of research. Legislation was lagging behind these rapid developments, but that is set to change following the publication of the new European drone legislation in June.’

‘Unfortunately, lots of the existing rules and systems that apply to conventional aviation are difficult to apply to drones,’ says Christiaan Lubbers from Air Traffic Control the Netherlands (LVNL). ‘The rise in the number of drones means that air traffic controllers will no longer be able to monitor individual drones. We therefore need new techniques and agreements regarding how drones can be safely integrated into the airspace, and how an air ambulance or police helicopter, for example, can safely be given priority.’

‘That is why Europe is working on ‘U-Space’, a system that connects all drones in the airspace and makes them visible to citizens and the authorities,’ says Henk Hesselink from the Netherlands Aerospace Centre (NLR). ‘As part of one of the projects to facilitate U-Space, called VUTURA, we link existing systems that register and identify drones, and we examine how information about drone flights can be shared with air traffic control for manned air traffic. These services and procedures are being tested in practice in 2019, with one of these tests being held on the TU Delft campus on 2 July.’ 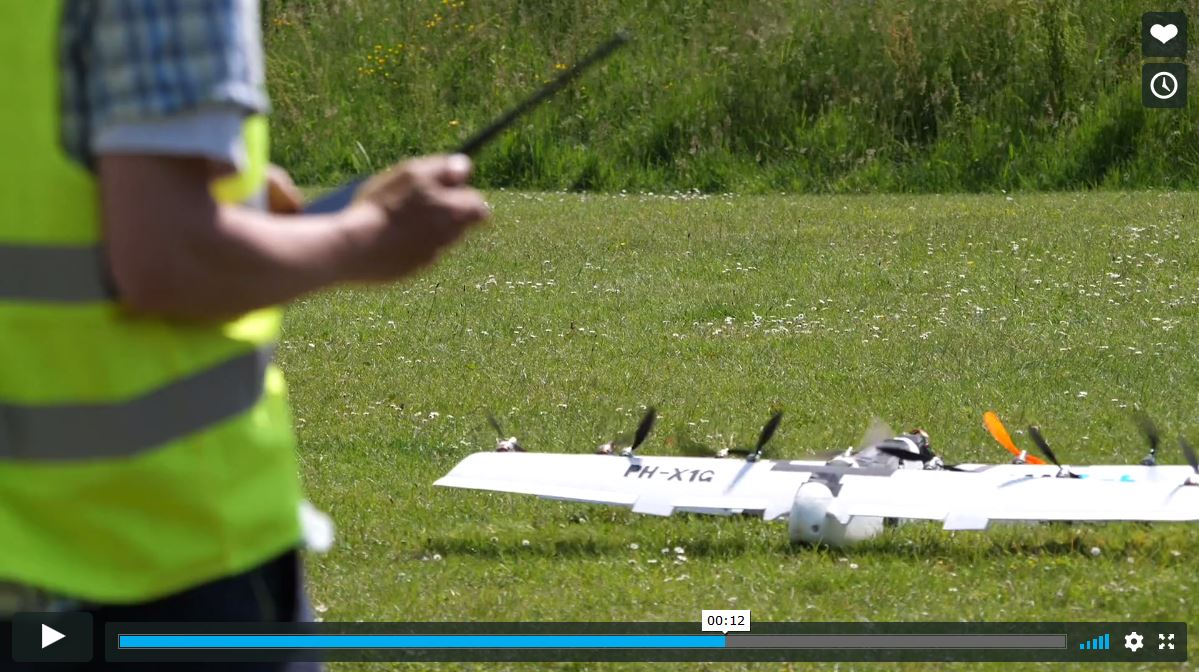 ‘During the demo flight, we will test one of the most challenging scenarios,’ says Bart Remes. ‘We are going to fly a drone over a densely populated area – the TU Delft campus – and out of sight of the pilot – or Beyond Visual Line of Sight. The drone is a so-called priority drone, in this case an AED drone. Another drone will lift off within the area of the flight, and this will need to autonomously and safely give way to the priority drone.’

‘During the demo, the drone will also be flying within a so-called Control Zone: the strictly-controlled area around an airport. For this flight, that is the Control Zone around Rotterdam The Hague Airport.’

The demo represents a significant test for the operation of U-Space. The flight request will be submitted to the air traffic control in Rotterdam via U-Space. Once approval has been received, the AED drone will lift off automatically from the roof of the TU Delft Library and fly some 700 metres to the Green Village. The drone will remain in constant contact with the tower via U-Space. In the event of imminent danger, air traffic control can instruct the drone controllers and other air traffic.

For this unmanned flight, TU Delft researchers have developed technology that uses U-Space and with which the drone fully autonomously registers all other air traffic in its vicinity, and constantly adjusts its own flight path accordingly.

In tests conducted in Australia last year, the MAVLab drones already proved that they could perform well in a large area. However, the challenge for the flight at TU Delft is much greater: the drone will be flying in a small area, which it must stay within at all costs.

The demo is part of the European VUTURA project, a SESAR Horizon 2020 project. It is being headed by the NLR. Other partners are TU Delft, the municipality of Enschede, UAV International, AirHub, the LVNL, Unifly, AirMap, Unisphere and Robor Electronics.