If only ships could talk

Worldwide demand for transport is increasing all the time. Although the port of Rotterdam is capable of handling the world’s largest container ships, processing the thousands of containers that they transport causes congestion on the water, roads and railways. But if ships and other transport systems exchange information with each other, the infrastructure can be used more efficiently and sustainably, argues Rudy Negenborn, Professor of Multi-Machine Operations & Logistics. He will give his inaugural address at TU Delft on 15 March 2019.

“Our transport needs are growing all the time: shipments increasingly need to arrive at their destination on time, at the lowest possible cost and with minimum CO2emissions”, says Professor Negenborn. At the port itself, rapid loading and unloading of huge container ships is essential because lying idle is expensive, but the ongoing transport of freight has bottlenecks of its own. “Inland shippers have to wait until the large container ships have been unloaded, congestion occurs on the railway where trains are unable to proceed and traffic jams on the roads are something everyone faces.” Increased exchange of information between the different systems at ports and in transport could bring an end to all that. “Currently, there is still too much human interaction, mostly by telephone. If you leave all that to the systems themselves, you can greatly improve efficiency. It then becomes much easier to coordinate plans on where each ship should dock, especially when unexpected disruptions occur.”

Developments such as the increasing power of computers and their ability to communicate with each other will soon make real-time logistics possible. “Computers use sensors, which are becoming cheaper and smaller all the time, to themselves gather information from the real world. With the help of actuators, they can then also take action, without human intervention. When machines like this communicate with each other and perform tasks together, we call them multi-machine systems”, explains Negenborn. We already use automated assembly systems in manufacturing and container terminals often have a high level of automation. But this does not go far enough: “Often, the individual components of such systems do not yet communicate actively with each other. I’m researching the advantages it can offer if they do that on a larger scale.”

Negenborn is developing mathematical models in order to be able to organise logistics predictively. “We are using mathematical models and data to attempt to calculate what the future will look like. Think of it as a model of the port of Rotterdam, in which we simulate how the ships, unmanned trolleys and robots at the terminal behave. So how can we achieve the ideal future situation? We aim to be able to predict that automatically at a scale of hours, minutes, seconds – in other words in real time.”
A predictive model of the port of this kind would then need to coordinate with other systems: “How close you get to the ideal situation partly depends on what others in the surroundings are doing.” For example, based on negotiation between systems, you can work out the exact time that a container ship needs to arrive at the port in order to be unloaded immediately. The ship can then adjust its speed, enabling it to save on fuel and emissions.

Autonomous shipping is also part of the research. Negenborn is working on a project todevelop a fleet of modular autonomous vessels that can flexibly transport small numbers of containers within the port, similar to the trolleys that drive around the terminal. Negenborn: “There is still plenty of space on the water, especially in comparison to the roads. You can resolve some of the problems on land and at other places around the port by making more efficient use of the water, for example by transporting individual containers in this way.” Expectations are also high for far-reaching autonomy in larger ships. More efficient sailing profiles can increase the sustainability of transport by water, for example, or even resolve an impending shortage of crew. “Many ships now have several crew members, but it may be possible with just one.” Ultimately, the best chief officers will all end up on shore.

The aim is for all the research to be applied in practice. Experimentation is possible in the existing research labs, but the Researchlab Autonomous Shipping (RAS), that will open in The Green Village on 18 March, is set to become TU Delft's living lab for sustainable innovation. “That will involve a move from formulae, simulation models and controlled indoor experiments to the outside world – with all of the uncertainties that involves. We will start by scale-testing our group of autonomous vessels before quickly shifting to a more complex environment with other waterway transport”, explains Negenborn. The lab will also bring together everyone involved in the development of autonomous shipping. “At the lab, we will be able to demonstrate at scale the very latest technology for large-scale transport issues. That is much more inspiring than sitting around a table at a meeting.” 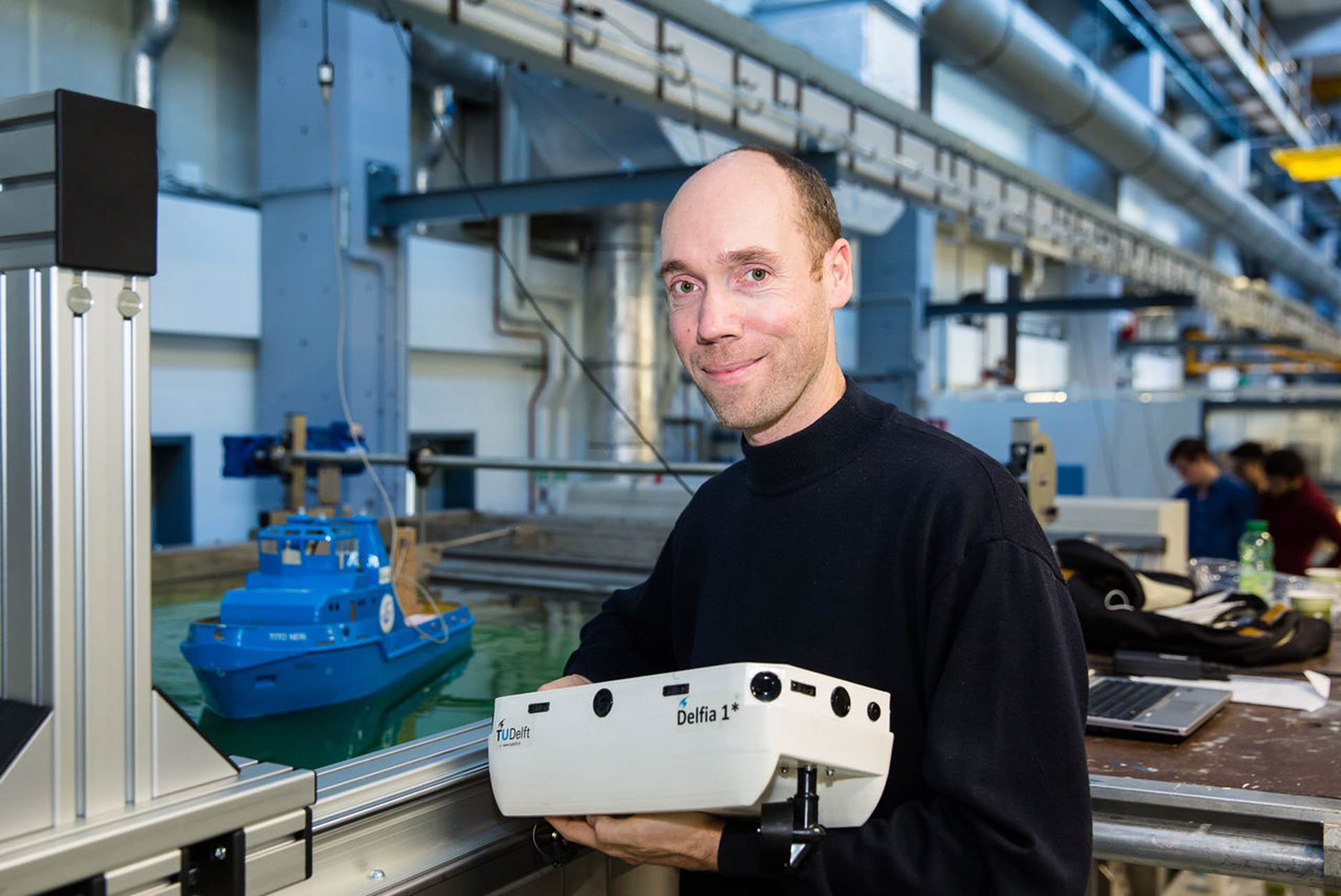