On Saturday 27 July the Human Power Team, a student team from TU Delft and VU Amsterdam, presented their latest aerodynamic bike at the Dutch National Military Museum in Soesterberg. The team hope that this recumbent bike, named the VeloX 9, will break the world speed record for cycling – which currently stands at 121.8 km/h – in the Nevada desert in the USA. 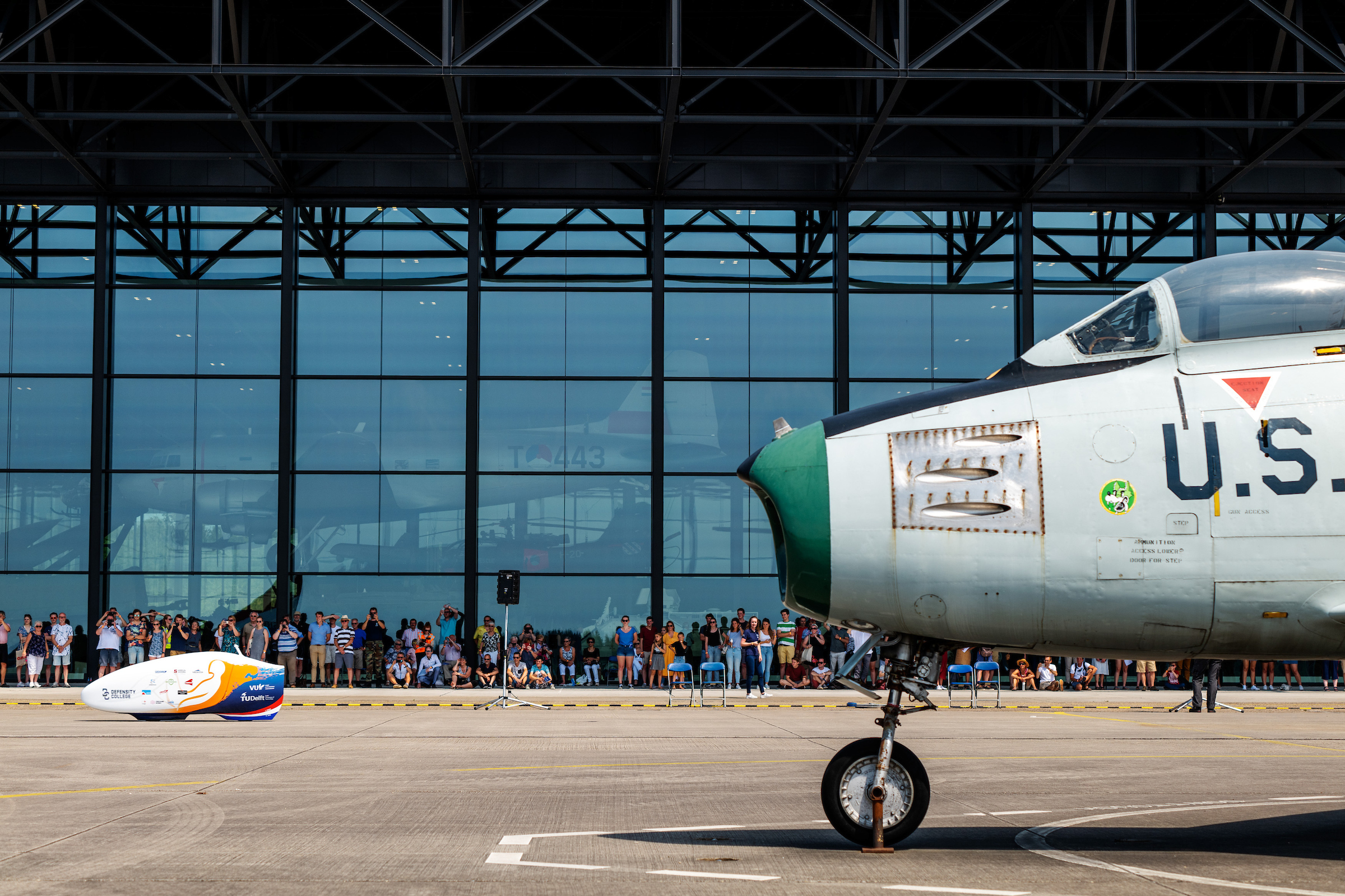 A real eye-catcher
The National Military Museum offered a part of its site for the students to try out the VeloX 9 between the military aircraft on display. This test run of the super-fast recumbent bike was a real eye-catcher among the museum's visitors. “Never before have we cycled for such as big audience as today”, said Britt Krabbenborg, team manager of the Human Power Team.

Women's world record
The aim of the Human Power Team is to unite man and machine in order to demonstrate what can be achieved using human power. They do this by producing a bicycle every year to take part in the World Human Powered Speed Challenge in Nevada, USA. Here the Human Power Team competes against other teams to achieve the highest possible speeds on a bicycle in the women's category. Last year the team took the first and second place. This year the students want to win in their category and also claim the world record for the Netherlands. Taking up the challenge are students Rosa Bas from Utrecht and Jennifer Breet from Amsterdam. The current world record stands at 121.8 km/h and is held by Frenchwoman Barbara Buatois.

Promising
The presentation at the National Military Museum showed that the athletes can make a stable start, and in other test runs in the Netherlands the recumbent bike has already achieved speeds over 70 km/h. Krabbenborg: “With an eye to the world record, this is a promising start. During these tests we only had two kilometres of tarmac to race on, which is quite short. During the world record attempt in America there is a straight run of eight kilometres, which gives you more time to accelerate to top speed. Besides this, the record attempt in America is held at an altitude of 1400 metres, so the lower air pressure there means the VeloX experiences less air resistance than in the Netherlands.”

Minimum resistance
“At high speeds our greatest enemy is air resistance. Which is why the shape of the aerodynamic shell of our bike is such an important factor in reaching our top speed”, explains Bart van de Krol, the team's Aerodynamics Engineer and a student of aerospace engineering. “We have designed the shape as closely as possible around the bodies of our athletes to keep the bike as small and streamlined as possible.” In addition, the VeloX is made of lightweight materials and uses a new gear system in which the sprockets move instead of the chain. This means the chain maintains a straight line and so experiences less friction than in a standard bike. Moreover, this year the VeloX has been fitted with tyres designed specially for the team, to endure the lowest possible rolling resistance. 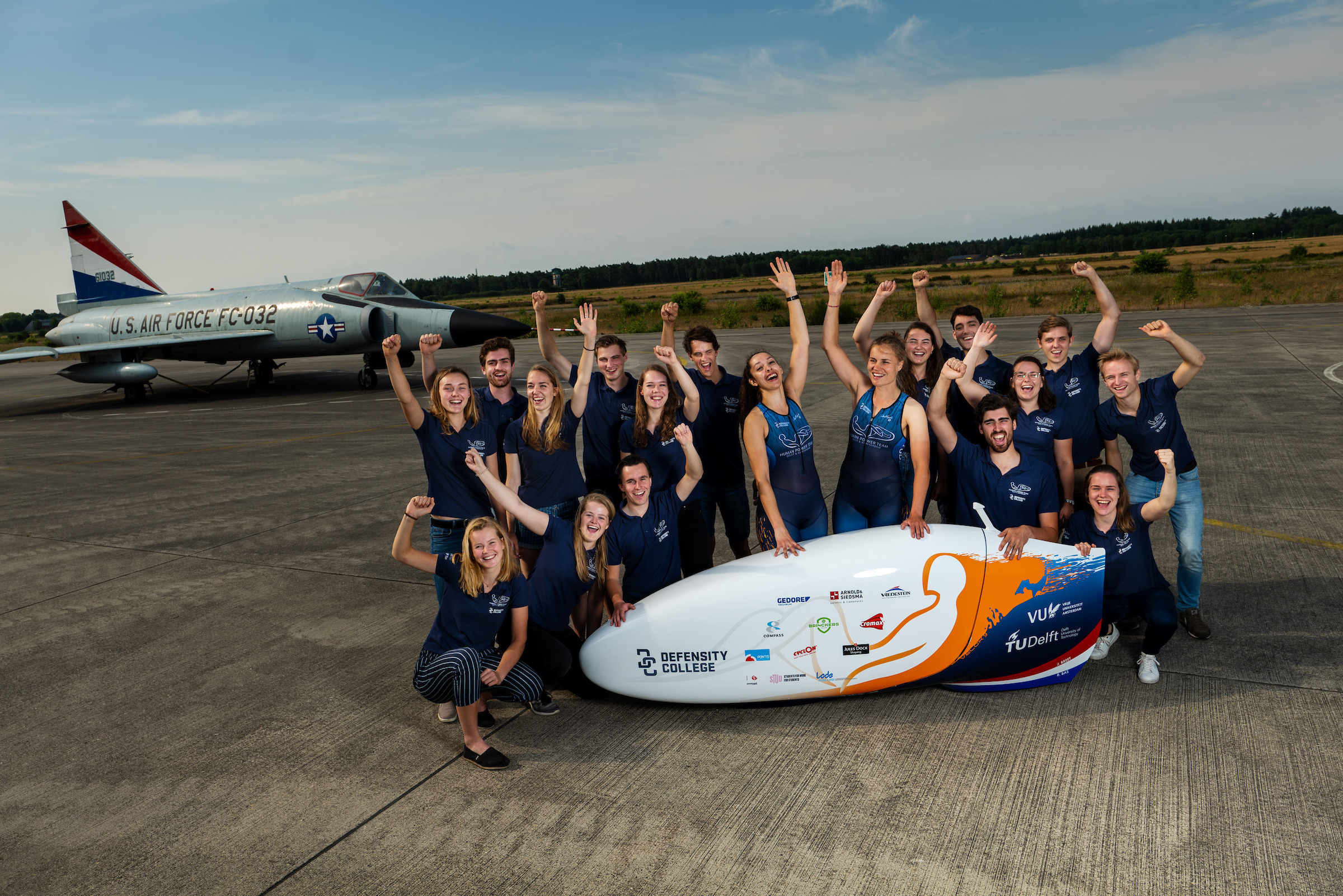 100% human power
The Human Power Team consists of 16 students who have all put their studies on hold for a year to work on the project. Besides producing a high-tech bike, it is important that the athletes themselves undergo the best possible preparation for the world record challenge. An endurance, power and high-intensity training programme will ensure that they are in top form at the start of the race in September. Right now the athletes are focusing on training on the VeloX 9 to get them accustomed to the new recumbent. In this way the team is doing all it can to claim the world title for the Netherlands.