The role of the architect in the circular economy

Research project ‘Circularcity’ explores the roles of contemporary Dutch architects regarding the circular economy in the built environment. The contemporary debate on the circular economy is informed by studying the roles of European architects designing solar houses, self-reliant in terms of energy and food, and reusing materials during the 1960/70s.

Circularcity has been granted funding by NWO Creative Industry KIEM. The Netherlands are currently going through an active and pioneering experimental transition with several small and medium architectural and urban firms researching, designing and building various sustainable projects regarding the circular economy in the built environment. The Netherlands has, since 2016, developed the 2050 circular strategy. 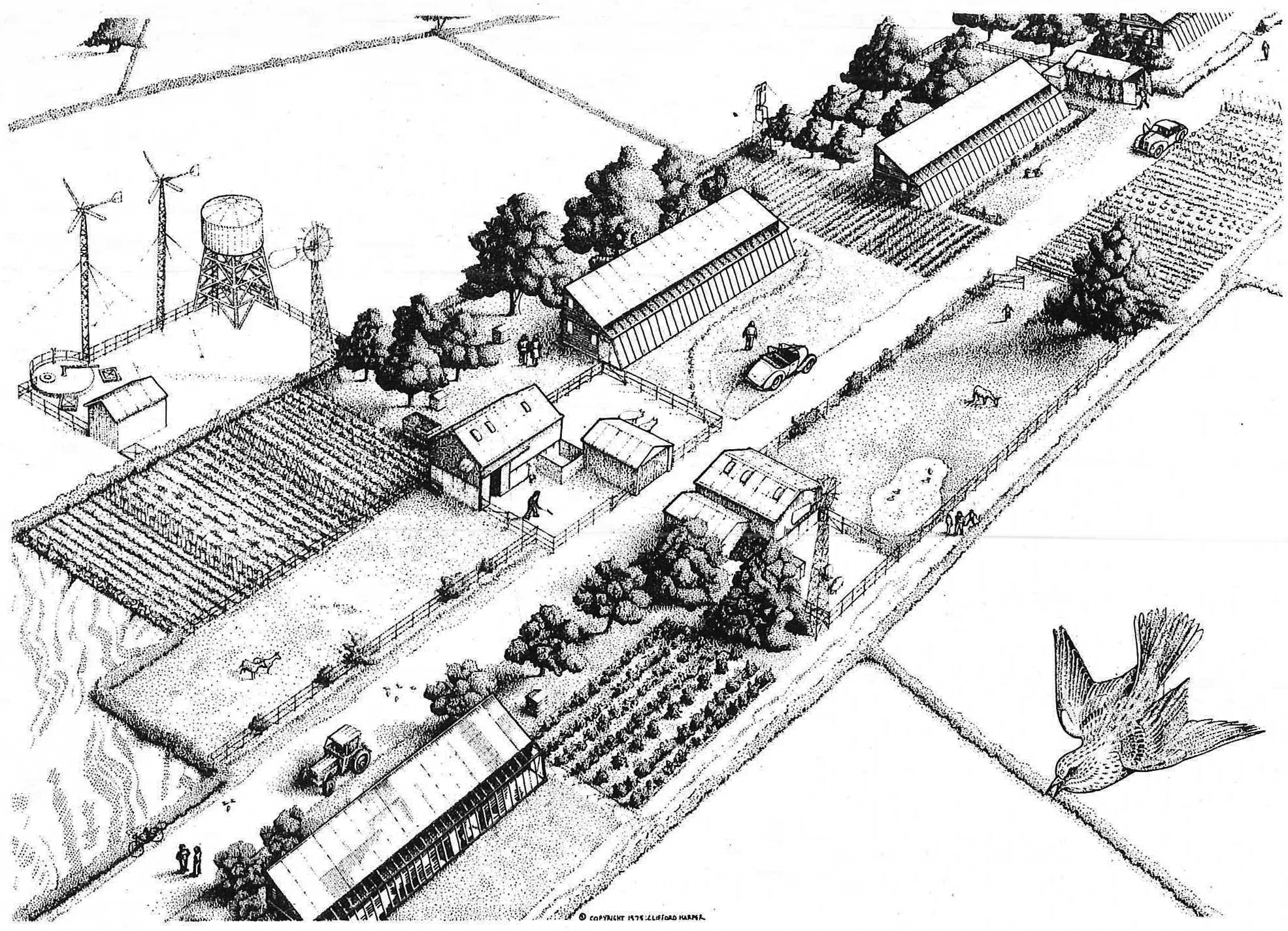 Autonomous community based on Vale’s autonomous house design, as published in Architectural Design Magazine in 1976. By Vale

European sustainable architecture was a remarkably innovative niche movement in the 1960s and 1970s, reaching its peak during the oil crisis of the 1970s. However, in the 1980s, when the oil price dropped, many pioneering and experimental projects developed during the 1960s-70s were not continued. Moreover, focusing on the role of the architect is another major gap when studying these projects. Both today and during the 1960s-70s, in order to succeed in finding innovative solutions, the architect has to play different roles such as researcher, technologist, engineer, DIY builder, theorist, facilitator, project manager, developer, etc.

Therefore, this research will explore the roles of contemporary Dutch architects regarding the circular economy in the built environment. The roles of the European architects designing solar houses, self-reliant in terms of energy and food, and reusing materials during the 1960s/70s will be studied as a reference to inform the contemporary debate. One of the reasons why the sustainable projects of the 1970s have not been successful is because the architects underestimated the three limitations related to health, the social condition, maintenance and renewal, which contributed to casting their projects aside during the 1980s. Contemporary Dutch architects often regard these limitations. This research will describe for every project the role of the architect concerning, besides the technical aspects, these three limitations. Ultimately, this research will try to respond to the questions: In which ways do the architects regard the limitations of sustainable interventions today? Which roles should the Dutch architects assume to implement their 'circular' projects successfully? To what extent the three limitations are considered in the newest standards (such as BREEAM for circular buildings or the Ellen MacArthur Framework Resolve for buildings) regarding the circular economy for the built environment?

In short: this research will involve the consultation of architectural archives, literature review, and interview with architects, regarding the circular economy and the sustainable architecture from the 1970s. The outcomes will be made available through an online open-access publication and a symposium annex exposition. Three phases will give the necessary insights: a state-of-the-art, an inventory, and roadmap for further investigation.

Space & Matter and other Dutch architectural firms dealing with the circular economy will be interviewed, as well as some of the architects from the 1970s including Jaap 't Hooft. Together with a literature review, the interviews will result into one compiled publication.

This research will review sustainable neighbourhoods in the form of closed but connected and therefore open systems designed by contemporary Dutch architects such as Schoonship, De Ceuvel in Amsterdam by Space & Matter, Bajes Kwartier by Fabrications, Blue City by Superuse Studios or Greenfields by RAU in Veenendaal. Meanwhile, this research will investigate autonomous houses and autonomous neighbourhoods, intended as self-reliant in terms of energy and food, which were designed by French, Dutch and English architects during the 60s/70s, such as Jaap 't Hooft, Alexander Pike, James Thring, Herbert Girardet, the school of Hull, to name a few.

The project also explores circles of flows intended as collection and reuse of materials and other resources as applied by Space & Matter, Superuse Studios, Fabrications, RAU and Turntoo in their research and design; and similarly, by Secondary Use Group in the UK and Guy Rottier in France during the 70s. Furthermore, this research analyses the experimental sustainable devices by contemporary Dutch architectural firms, which are both technical and spatial like for instance a rooftop farm in The Hague by Space & Matter, the Vertical Park inside the Groene Toren in the Bajes Kwartier by Fabrications, the Earthship in Zwolle by Superuse Studios or the addition of the central dome in the World Wildlife Fund in Zeist by RAU. In parallel, the research will investigate the 1970s' solar and autonomous houses with technical and spatial devices like the Trombe Wall, the liveable greenhouse, and the habitable structural core of the wind turbine, designed by Jacques Michel, Felix Trombe, Frederic Nicolas, James Thring, Damir Perinic among others. The roles of the architects in these case studies will be illustrated, analysed, and selected for a comparison in an open-access online database.

The final event, consisting of a symposium and exhibition, will help disseminate the results of the investigation on the roles of the architect concerning the circular economy in the Netherlands. The event will form a new convergence on future actions among academics, practitioners and stakeholders.