The Faculty of Aerospace Engineering is pleased to announce that Guido de Croon has been appointed professor 'Bio-inspired Micro Air Vehicles' at the Department of Control & Operations. Within the Micro Air Vehicle Laboratory (MAVLab) Micro Air Vehicles are improved to be able to (help) solve problems in society in a safe way. 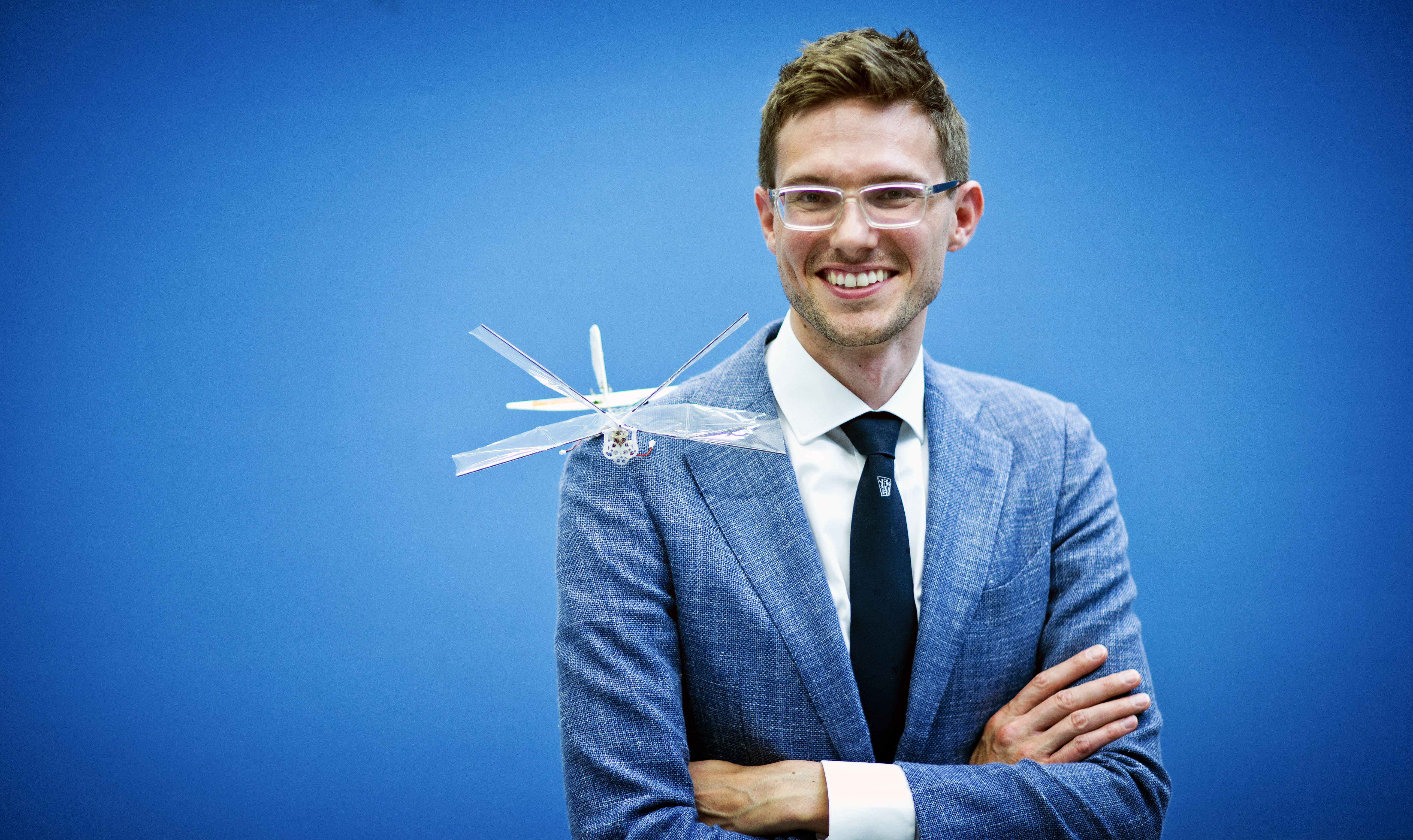 Guido de Croon: “ I am very happy with the appointment of full professorship. In 2008 I came to TU Delft, having obtained a PhD in Artificial Intelligence (AI) at Maastricht University. It was my dream back then to make the 16-gram DelFly, developed by the MAVLab, completely autonomous. My motivation came from the extreme challenges that this would pose to AI: extremely lightweight flying robots have scarce resources in terms of energy, sensing, and processing, while they have to react quickly to their environment”.

In the following years Guido de Croon continued to work towards this goal, also when he worked for the European Space Agency for several years. It gave him the opportunity to study how limited, small robots could be enabled to perform complex tasks. Autonomous navigation, for example, is a complex task in which the robot must be able to avoid obstacles, explore unfamiliar surroundings, recognise places and much more. Such tasks typically involve large, heavy, energy-hungry sensors and powerful processors. In order to find a way to perform such tasks with much less capacity - and therefore weight - it was necessary to go back to general principles of natural intelligence, such as the principle that simple behaviours can sometimes solve complex tasks. For instance, keeping optical flow constant allows drones to land softly, without requiring sensors to measure the height.

In 2013, a DelFly was able to fly around completely autonomously while avoiding obstacles using 'onboard stereo vision'. After this success of a single autonomous light-weight drone, the next goal was to develop swarms of such drones and on having them navigate in larger spaces. In 2019, Guido with MAVLab succeeded in making a swarm of tiny, 33-gram drones that is able to explore unknown indoor spaces and come back to the departure point. These achievements led to publications in Science and Science Robotics.

There is still plenty to do for the Micro Air Vehicle Laboratory (MAVLab), says prof. Guido de Croon: “There is still a huge gap between flying animals and drones: A fruit fly is able to fly, avoid obstacles and predators, navigate, find food and shelter, interact socially with other fruit flies and learn from its experiences in the world, all with only 250,000 neurons! Drones actually often already carry more processing but are by far not yet able to perform all these feats

As a full professor I want to work on bridging this gap. Of course, in order to achieve that, we need to focus on a new, bio-inspired approach to AI. But other areas are important as well, such as efficient control techniques and further improving the design of our flapping wing drones. In the end, this will result in swarms of tiny drones that can help in search-and-rescue or can monitor the crop in greenhouses”. 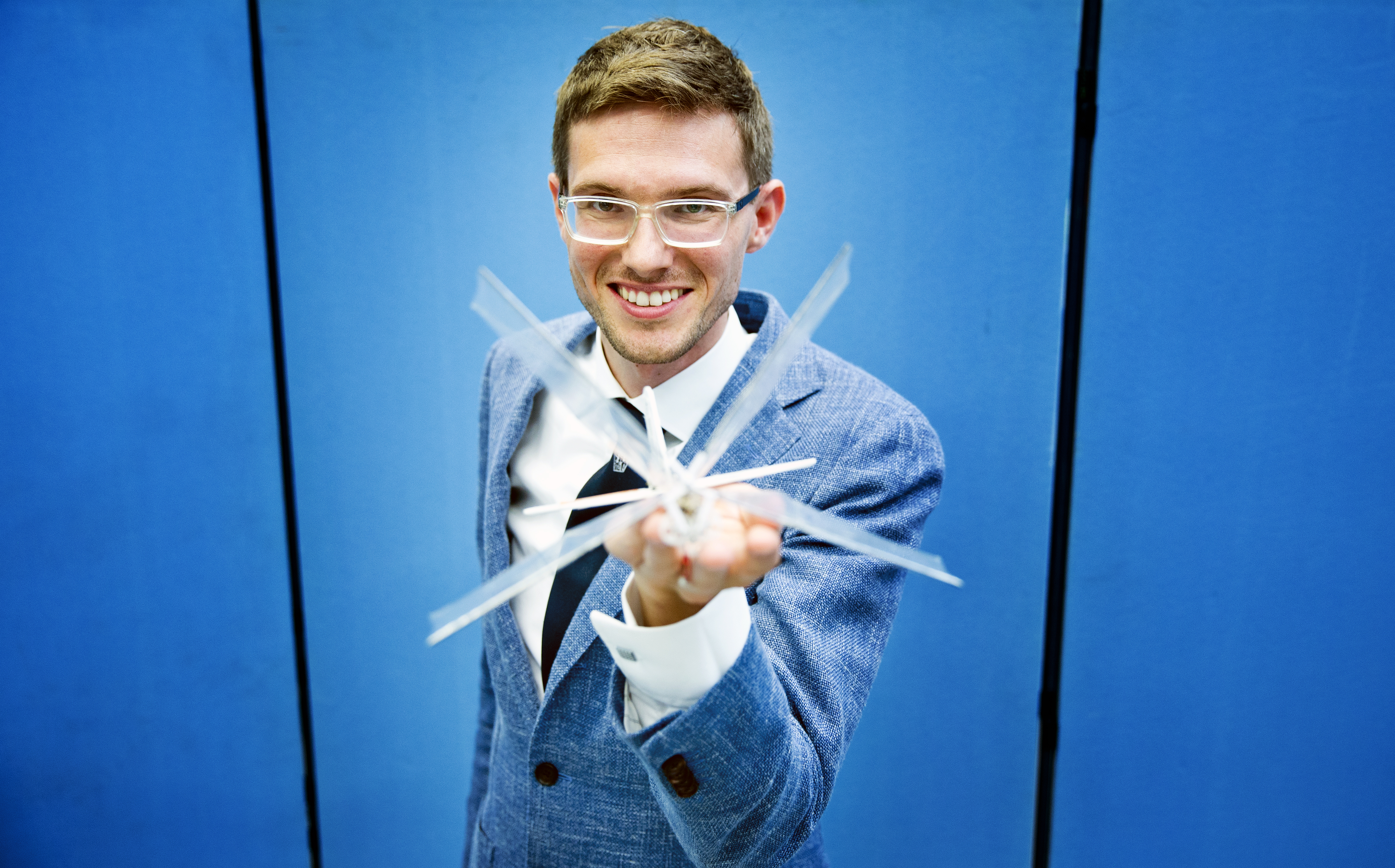