It is with great sadness that I inform you of the passing away of our esteemed professor emeritus Herman van Bekkum on 30 November 2020.

Herman van Bekkum was Rector Magnificus of Delft University of technology from 1975 to 1976 and worked at TU Delft from 1955 to 1998. During this time, he worked for Shell for a brief period between 1959 and 1961, but he ultimately chose to make TU Delft his home, and a very successful choice that was. After his retirement in 1998 he remained active in our faculty for many years, both within Chemical Engineering and the catalysis community. He meant a lot to the university, especially to the Faculty of Applied Sciences.

Herman van Bekkum was a versatile chemist with a near limitless zest for work. He made major contributions to science, especially in the field of catalytic applications of zeolites and ordered mesoporous materials and non-food applications of sugars. More importantly, his infectious enthusiasm conveyed his love of organic chemistry to colleagues and students alike, and enabled him to inspire great achievements in them. This quality was rewarded in 1996 when TU Delft named him a Professor of Excellence.

Herman van Bekkum always sought co-operation with industry, and managed to secure extensive funding that he could put towards satisfying his enormous creativity and curiosity. He performed various managerial positions within and beyond TU Delft. Within TU Delft he served as Rector Magnificus in the 1975-1976 academic year, and beyond the confines of the university his positions included that of president of the Royal Netherlands Chemical Society (KNCV). From 1995, he was a member of the Royal Netherlands Academy of Arts and Sciences (KNAW), an important academic distinction. In 1980, he was appointed an honorary member of the Technologisch Gezelschap (TG) study association.

Enthusiasm, enormous commitment, efficiency in an environment that sometimes verged on the chaotic, and great mental speed and agility characterised his unique personality. Staff members at the faculty of Applied Sciences often had their work cut out keeping up with him in the corridors. And he never failed to track down the exact documents he needed in his crammed study.

Herman van Bekkum will be in our memory always, a memory that will be cherished by all at the faculty who had the pleasure of meeting him or working with him. Our sincerest condolences go out to his family. 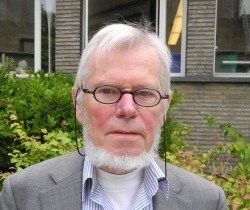