Researchers at Delft University of Technology have developed a sensor that is only 11 atoms in size. The sensor is capable of capturing magnetic waves and consists of an antenna, a readout capability, a reset button and a memory unit. The researchers hope to use their atomic sensor to learn more about the behaviour of magnetic waves, so that hopefully such waves can be used in green ICT applications one day.

In theory, we can make electronic data processing much more efficient by switching to spintronics. Instead of using electrical signals, this technology makes use of magnetic signals to transmit data. Unfortunately, magnetism tends to get incredibly complicated, especially at the tiny scale of our computer chips. You could view a magnetic wave as millions of compass needles performing a complex collective dance. Not only do the waves propagate extremely fast, causing them to vanish in mere nanoseconds, the tricky laws of quantum mechanics also allow them to travel in multiple directions at the same time. This makes them even more elusive. 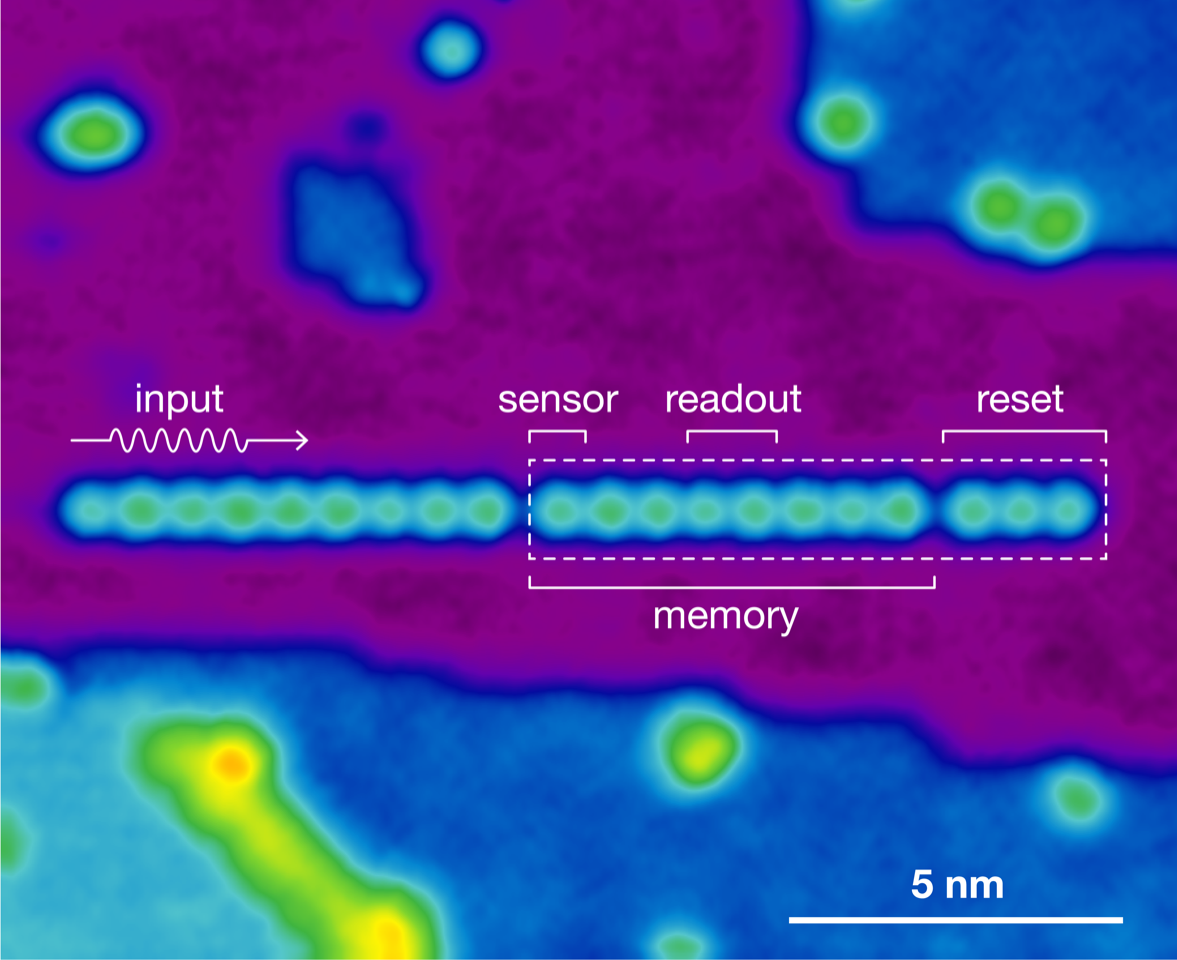 Microscope image, recorded using a scanning tunneling microscope, of the detector device (inside the dashed rectangle), connected to a wire consisting of nine magnetic atoms.

Mouse trap for magnetic waves
In order to still be able to study these rapid oscillations, researchers from Delft University of Technology have developed a minuscule device. Consisting of only eleven atoms, the device is equipped with an antenna, a readout capability, a reset button and a memory unit to store the measurement outcomes. The central idea of the invention is that the device instantly detects a passing magnetic wave and remembers this information. “Compare it to a mouse trap,” research leader Sander Otte explains. “A mouse is typically too fast and too small to capture by hand. But a mouse trap reacts very quickly and then hold the mouse in place.”

The researchers connected the device to magnetic atomic wires through which magnetic waves were sent. Although the test wires were still very short, the results are promising: the waves moved very peculiarly, as one would expect from quantum mechanics. The next step is to also apply this technique to more complicated circuits in order to gain more insight into the behaviour of spintronics.