GUSTO is a balloon telescope that will simultaneously map three types of material in the gas and dust between stars. SRON and TU Delft develop all three detector arrays for this NASA mission. The final two flight arrays have now passed their pre-shipment review and are shipped to the University of Arizona for integration into the balloon observatory. Together with the earlier shipped array for 4.7 terahertz, the 1.4 and 1.9 terahertz arrays complete GUSTO's flight detector.

NASA's Galactic/extragalactic ULDB Spectroscopic Terahertz Observatory (GUSTO) is a balloon observatory that will drift in the Earth’s atmosphere for over 75 days, at the edge of space at 36 km altitude. The launch is scheduled for December 2021 from Antarctica. The observatory consists of a telescope of one meter in diameter and three observation instruments carried by an Ultra-Long Duration Balloon (ULDB). It contains three array receivers for electromagnetic radiation of 1.4, 1.9, and 4.7 terahertz.

The GUSTO team members from SRON and TU Delft, led by Jian-Rong Gao, have now delivered the two arrays for the 1.4 and 1.9 terahertz channels. The array for the 4.7 terahertz channel was already finished. Both arrays meet the sensitivity requirements and the pointing requirements of the lens-antenna beam, which is no more than 0.1 degree among 8 pixels, with a margin of a few pixels. The design, manufacture, assembly and testing of the array were carried out at SRON, while the superconducting detectors were developed at TU Delft.

GUSTO will measure the emission lines of ionized nitrogen (NII), carbon (CII) and oxygen (OI) in the spectrum of the interstellar medium—the material floating in between stars. This helps scientists to determine the life cycle of interstellar gas in our Milky Way, witness the formation and destruction of star-forming clouds and understand the dynamics and gas flow in the vicinity of the center of our Galaxy. 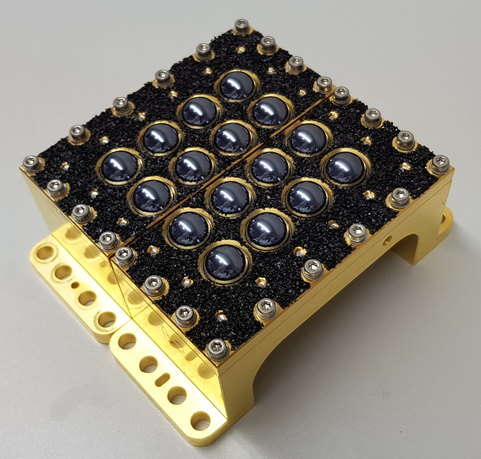 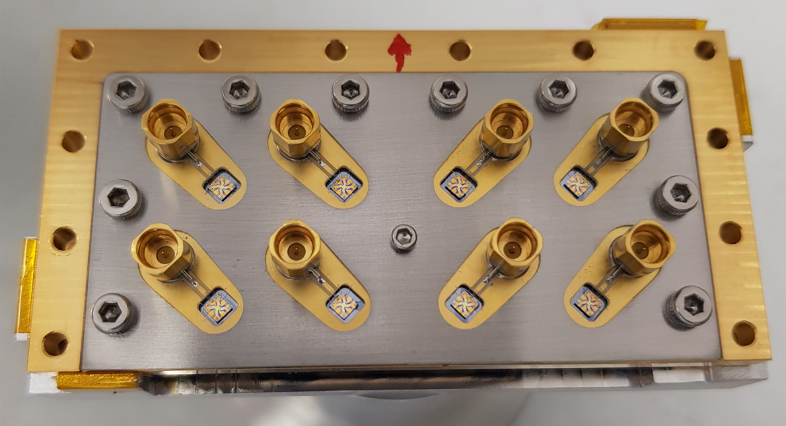 The back side of one of the arrays, with the protection cover removed. The eight detector chips, mounted on the backside of a silicon lens, can be seen from eight holes in the PCB circuit board