When waves batter the coast, energy is generated. Researchers Branko Šavija and  Yading Xu from TU Delft want to capture that by using a special type of concrete to create an alternative energy source.

The Dutch popular science journal KIJK has selected the idea for their competition Best Tech Idea 2021. The winner will be determined by the public. You can cast your vote from 14 September to 5 October 2021. 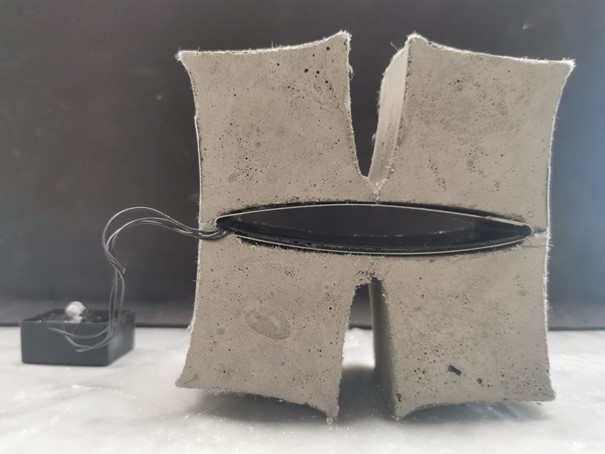 People tend to think that green energy means wind turbines or solar panels. Researcher Branko Šavija (TU Delft) would like to add concrete to this list. Together with a colleague, he is investigating whether that is possible.

For several years, Šavija has been working at the Department of Materials Science and Engineering at TU Delft on materials that behave “unexpectedly”. These include Auxetic concrete, a flexible concrete with a special property. When loaded, it contracts, but if the load disappears, it expands like a sponge. ‘Normal concrete also moves but not as much. This new concrete contains holes, as a result of which it is less strong but more flexible.’

‘Generating energy through movement is nothing new’, says Šavija. ‘A bike dynamo, for example, uses that principle. This type of concrete also moves, and you can put that to use. Furthermore, our research has revealed that the concrete can withstand many movement cycles, which is necessary if energy is to be generated from it.’

People tend to associate concrete with environmentally polluting characteristics and not with the possibility to generate energy. ‘On the contrary, people think that concrete is polluting due to CO2 emission. However, it can also be put to good use, and an advantage of concrete is that it can be used on a large scale.’

One possible application that the researchers see is using concrete in coastal protection. Breakwaters consist of large pieces of concrete. The vibrations that arise in the concrete when the waves hit it can be converted into electricity. As the Netherlands has 450 km of coastline, the researchers see a lot of potential in this plan: ‘Blocks several metres long could be used. We think that this idea can work. We just need the possibility to try it out.’

The researchers explain the idea behind their research in the below video that they made for their Open Mind proposal:

Šavija and his fellow researcher Yading Xu submitted a proposal to the NWO funding instrument Open Mind last year. In November 2020, during the online edition of innovation festival TEKNOWLOGY, they received a grant of 50,000 euros. With that, they have a year to test their plan. According to the jury, it was a ‘completely original idea to explore an interesting new source of energy’.

Colleagues also call their idea surprising because, at the fundamental level, they are often busy working in the opposite direction. Šavija: ‘As an engineer, you try to make constructions as strong as possible so that these can withstand wind, waves or vibrations. Now we are trying to make use of that movement.’ The concrete can then be used at locations where that strength is not needed, but the flexibility can be used.

Open Mind is ideal for being able to fund this type of research, according to Šavija. ‘I wouldn’t know where else I could submit a proposal for these kinds of ideas. It is an unconventional idea, and we don’t know yet if it will work. In engineering, there are few ways to fund such a plan. More funding possibilities will only present themselves once we reach a higher technology readiness level.’ For Šavija, it means an opportunity to take a new direction as a researcher. ‘Before this, I wasn’t working on energy. Now I have the possibility to elaborate on this idea.’

In their lab, Šavija and Xu are currently working on linking piezoelectric polymer films to the concrete. This soft and flexible film is capable of converting the movement from the concrete into electronic resistance. ‘We will subsequently connect this to measuring equipment to test whether it works’, says Šavija. ‘Then we will study which factors influence how well it works, and how efficient it is. Eventually, we will develop a proof-of-concept at laboratory scale.’

Partners from the energy world

Although it is in its infancy, the research has already opened several doors. ‘Nobody believes something until they have seen it. We have now submitted a proposal for a European grant (EIC Pathfinder, ed.). That has already yielded a number of contacts for the future, even if the proposal is rejected. We have also spoken with several parties that we did not know yet. For example, we now have a partner from Italy, a university that is working on energy generation through human movements, such as sensors in shoes. Our idea is also out-of-the-box for them.’

If they can show a proof-of-concept at the end of the current research, then Šavija foresees additional chances to talk with other parties as well. ‘It will then be easier for us to approach commercial parties who might be interested in supporting this type of research too.’ Šavija is confident about their prospects because he knows that there is a considerable need for alternatives in the area of green electricity.