How materials behave depends on the interactions between countless atoms. You could see this as a giant group chat in which atoms are continuously exchanging quantum information. Researchers from Delft University of Technology in collaboration with RWTH Aachen University and the Research Center Jülich have now been able to intercept a chat between two atoms. They present their findings in Science on 28 May.

Atoms, of course, don’t really talk. But they can feel each other. This is particularly the case for magnetic atoms. “Each atom carries a small magnetic moment called spin. These spins influence each other, like compass needles do when you bring them close together. If you give one of them a push, they will start moving together in a very specific way,” explains Sander Otte, leader of the team that performed the research. “But according to the laws of quantum mechanics, each spin can be simultaneously point in various directions, forming a superposition. This means that actual transfer of quantum information takes place between the atoms, like some sort of conversation.”

On a large scale, this kind of exchange of information between atoms can lead to fascinating phenomena. A classic example is superconductivity: the effect where some materials lose all electrical resistivity below a critical temperature. While well understood for the simplest cases, nobody knows exactly how this effect comes about in many complex materials. But it’s certain that magnetic quantum interactions play a key role. For the purpose of trying to explaining phenomena like this, scientists are very interested in being able to intercept these exchanges; to overhear the conversations between atoms.

In Otte’s team they go about this rather directly: they literally put two atoms next to each other to see what happens. This is possible by virtue of a scanning tunneling microscope: a device in which a sharp needle can probe atoms one-by-one and can even rearrange them. The researchers used this device to place two titanium atoms at a distance of just over one nanometer – one millionth of a millimeter – apart. At that distance, the atoms are just able to feel each other’s spin. If you would now twist one of the two spins, the conversation would start by itself. 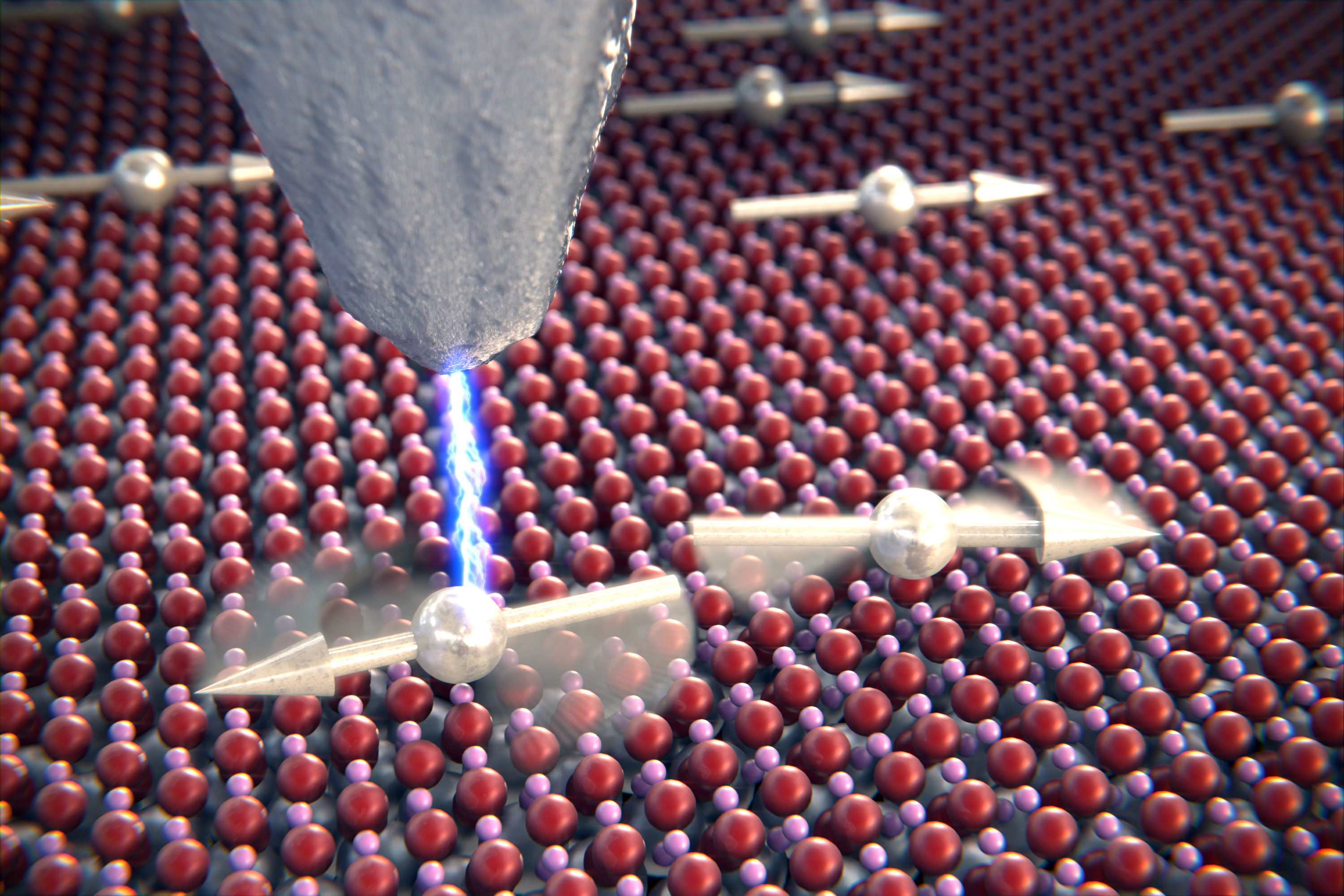 Artist’s impression of the experiment, where an electric pulse is applied to a titanium atom. As a result, its magnetic moment suddenly flips around. A neighbouring titanium atom (right) reacts to this motion, but can’t keep pace with the fast movement. As such, an exchange of magnetic quantum information between the atoms is initiated.

Usually, this twist is performed by sending very precise radio signals to the atoms. This so-called spin resonance technique – which is quite reminiscent of the working principle of an MRI scanner found in hospitals – is used successfully in research on quantum bits. This tool is also available to the Delft team, but it has a disadvantage. “It is simply too slow,” says PhD student Lukas Veldman, lead author on the Science publication. “You have barely started twisting the one spin before the other starts to rotate along. This way you can never investigate what happens upon placing the two spins in opposite directions.”

So the researchers tried something unorthodox: they rapidly inverted the spin of one of the two atoms with a sudden burst of electric current. To their surprise, this drastic approach resulted in a beautiful quantum interaction, exactly by the book.  During the pulse, electrons collide with the atom, causing its spin to rotate. Otte: “But we always assumed that during this process, the delicate quantum information – the so-called coherence – was lost. After all, the electrons are incoherent: the history of each electron prior to the collision is slightly different and this chaos is transferred to the atom’s spin, destroying any coherence.”

The fact that this now seems not to be true was cause for some debate. Apparently, each random electron, regardless of its past, can initiate a coherent superposition: a specific combination of elementary quantum states which is fully known and which forms the basis for almost any form of quantum technology.

“The crux is that it depends on the question you ask,” argues Markus Ternes, co-author from the RWTH Aachen University and the Research Center Jülich. “The electron inverts the spin of one atom causing it to point, say, to the left. You could view this as a measurement, erasing all quantum memory. But from the point of view of the combined system comprising both atoms, the resulting situation is not so mundane at all. For the two atoms together, the new state constitutes a perfect superposition, enabling the exchange of information between them. Crucially for this to happen is that both spins become entangled: a peculiar quantum state in which they share more information about each other than classically possible.”

The discovery can be of importance to research on quantum bits. Perhaps also in that research you could get away with being slightly less careful when initializing quantum states. But for Otte and his team it is mostly the starting point of even more beautiful experiments. Veldman: “here we used two atoms, but what happens when you use three? Or ten, or a thousand? Nobody can predict that, as computing power falls short for such numbers. Perhaps one day we will be able to listen to quantum conversations that nobody could ever hear before.” 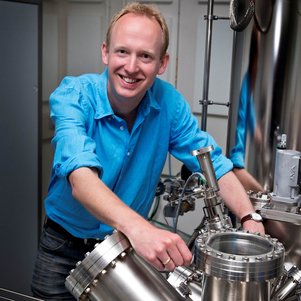