Can a light breeze nullify the 1.5-metre measure indoors? It looks like it could, says Saša Kenjereš (Chemical Engineering) in a new article in Annals of Biomedical Engineering. He modeled the way virus particles leave a talking person's mouth, as well as how far particles can travel in both quiescent and moving air. In doing so, he found that a virus can surf along on a slight tailwind and thus travel much farther than in an environment in which the air is completely still. In a room with stationary air, 1.5 metres seems to be a safe distance. But a barely perceptible breeze allows virus particles to bridge such a gap with relative ease.

When talking, people produce a jet of air similar to a jet of water in a swimming pool, on which the virus particles can hitch a ride. Close to the source - in this case: the mouth - this jet is very concentrated and clearly defined. But the further you get from the source, the more the jet loses its shape and strength, until there is nothing left of it.

Kenjereš: "As you can see in this animation, the 1.5 metre distance has an effect. After about a metre, the jet becomes unstable and turbulent."

In practice, it is very unlikely that the air in a room is stationary, which is why Kenjereš also analyzed what happens to the jet when someone speaks with a slight tail-wind. Given a barely noticeable breeze of 0.2 metres per second, this is the result:

So, using moving air, a virus can travel a much greater distance. One solution to this problem might be to put more distance between people. "But the further people are from each other, the louder they will talk", Saša Kenjereš writes in his article. This, of course, leads to an increase in both exhaled and inhaled air, which increases virus transmission.

It is also important, Kenjereš stresses, to distinguish between outdoor and indoor encounters. While outdoors, virus-contaminated air will probably be diluted quickly by the ambient air, indoor encounters can be a fertile ground for virus transfer (and thus new infections).

This was also the conclusion of Delft researcher Philomena Bluyssen (Architecture), who showed in her study that aerosols spread more easily through the room and remain there for a long time if it is not properly ventilated, an insight that was not adopted by the OMT and RIVM for a long time. The work of aerodynamics professor Fulvio Scarano (L&R), fluid dynamics expert Lorenzo Botto (3mE) and simulation expert Wouter van den Bos (3mE), who developed software to determine the contamination risk for spaces such as classrooms and airplanes, also supports this idea.

These studies each show in their own way that the current recommended distance from one another is only sufficient to prevent Covid-19 contamination in very specific circumstances. And that adjusting the conditions, for example keeping more distance, does not necessarily result in fewer infections. 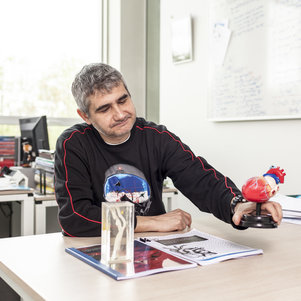