Build onshore wind turbines, raise gas prices or maybe impose a meat tax? What does the Dutch population think about Dutch climate policy? Researchers used a so-called Participatory Value Evaluation (PVE) to enable more than 10,000 Dutch people to advise the government on this issue. This public consultation method ensures that the (silent) middle group can have its say. On 17 June, the researchers presented the final report to the chairman of the Climate Agreement Progress Consultation, Ed Nijpels, after which they explained the results in the Dutch House of Representatives.

Involving a broad range of society

Now that Europe has recently tightened its climate targets, the new government must decide what measures to take to reduce greenhouse gas emissions such as CO2. Members of the House of Representatives have previously indicated a desire to involve a broad range of the population in this process. Researchers from TU Delft and Utrecht University therefore developed the climate consultation. In March, more than 10,000 Dutch people advised the government on this issue.

PVE is an innovative public consultation method that goes far beyond an opinion poll or a referendum. In a referendum, complex issues are squeezed down into a yes/no choice. In a PVE, participants can express their preferences based on an overall picture of policy options and effects. Participants are given the opportunity to assess policy options in context, they can provide reasons for and qualify their preferences, and come up with their own ideas. The PVE invites citizens to step into the government’s shoes, offering them a greater understanding of the complexity of the choices faced by politicians.

This way, the government places itself closer to the citizen; this makes their decisions more credible.

Four conditions that are determinative for support from the middle group 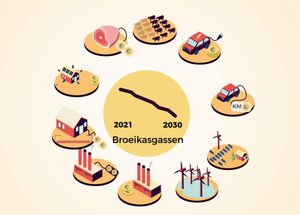 The acceptance of climate measures that directly affect the personal life of citizens – such as a meat tax and the construction of onshore windmills – will be higher if it is clearly visible that the government has done everything possible to take measures that are not or hardly perceived as directly affecting people’s personal lives (such as the construction of offshore windmills, stimulating insulation of houses, stimulating solar panels on roofs).Visibility is very important in this respect. Roofs that are full of solar panels work better than a plan to realise this in the future. The middle group considers it important for the government to pursue a strict policy against large polluting sectors, for example, by increasing the air travel tax or tightening up the carbon tax rules for industry. Citizens feel that sectors such as industry and aviation are hardly affected by climate policies, thanks to their good political contacts. If citizens perceive that the government is pursuing a strict policy against sectors they consider to be polluting, they will be more inclined to accept measures that they believe affect them directly.

If the government wants a more ambitious climate policy to be supported by the middle group, it would be wise to focus strongly on measures that score best on the four conditions, such as windmills at sea, tightening up the carbon tax rules for industry and stimulating the insulation of homes. Increasing subsidies for reduction of carbon emissions by industry, raising the air travel tax and investing in green hydrogen also score well and can count on support from the middle group.

Participants are very positive about the climate consultation. 80% say the government should use this method more often. Critical participants found the number of measures on which they could give an opinion too limited. Positive participants particularly liked being able to provide nuance and be included in decisions that the government has to make. Participants experienced a strong sense of commitment to public policy through their participation and they found the information they received in the consultation clear and accessible. For example, one participant says: “This way, the government places itself closer to the citizen; this makes their decisions more credible.”

The report is available to download at www.tudelft.nl/klimaatraadpleging (Dutch)

For more information on the PVE method: www.tudelft.nl/pwe