The ventilation system in the Thialf ice stadium creates an airflow that affects the skaters. This is the conclusion of TU Delft aerodynamics researcher Alexander Spoelstra. He was commissioned by Thialf to closely map out the airflow, after skaters asked questions about the stadium's ventilation system. Spoelstra used a research set-up made up of lasers, helium bubbles and high-speed cameras. The technical report of the investigation was published online on 26 March.

The tailwind measured was found to be up to 0.5 km/h. “That is a tiny value which you could compare to Wind Force 0 if you were measuring wind outside", says Spoelstra. “However, in the world of top-level sports, tiny values can have a big impact. It is striking that every single measurement showed a tailwind. We advise Thialf to investigate the ventilation system further and to see whether changing the direction of the floor ventilation makes any difference to the direction of the airflow”.

The ventilation system in Thialf comprises ceiling nozzles and floor grilles. During the investigation measurements were taken at different temperatures and configurations: both systems on, both systems off and only the ceiling nozzles or floor grilles on. All measurements that were taken with at least one component of the ventilation system switched on showed the same tailwind. “This indicates that the average tailwind experienced is the same for all skaters. So there can be no question of unfair competition arising from any changes to temperature or configuration of the ventilation system during a race”, says Spoelstra.

The values measured resulted from an initial research project. While using this system to measure the air resistance around moving skaters in Thialf, the researchers from the TU Delft Sports Engineering Institute were asked by Thialf if they could also carry out measurements on the ventilation system. “We were able to set up this initial test very quickly and to analyse the results in collaboration with Professor of the indoor environment Philomena M. Bluyssen from the Faculty of Architecture and the Built Environment”, says Professor Frans van der Helm, director of the TU Delft Sports Engineering Institute. “Normally we use these kinds of measuring systems and innovations to help athletes improve their performance, but we also feel it is important to accurately examine issues such as this in order to contribute to fair sportsmanship”.

The airflow was measured using the Particle Image Velocimetry (PIV) method. Here, small and traceable particles are introduced into the airflow, in this case helium-filled soap bubbles, which are then lit up using a laser to make them visible. By following the particles with a high-speed camera and using the images obtained to measure the displacement of the particles, we can map out the exact airflow. 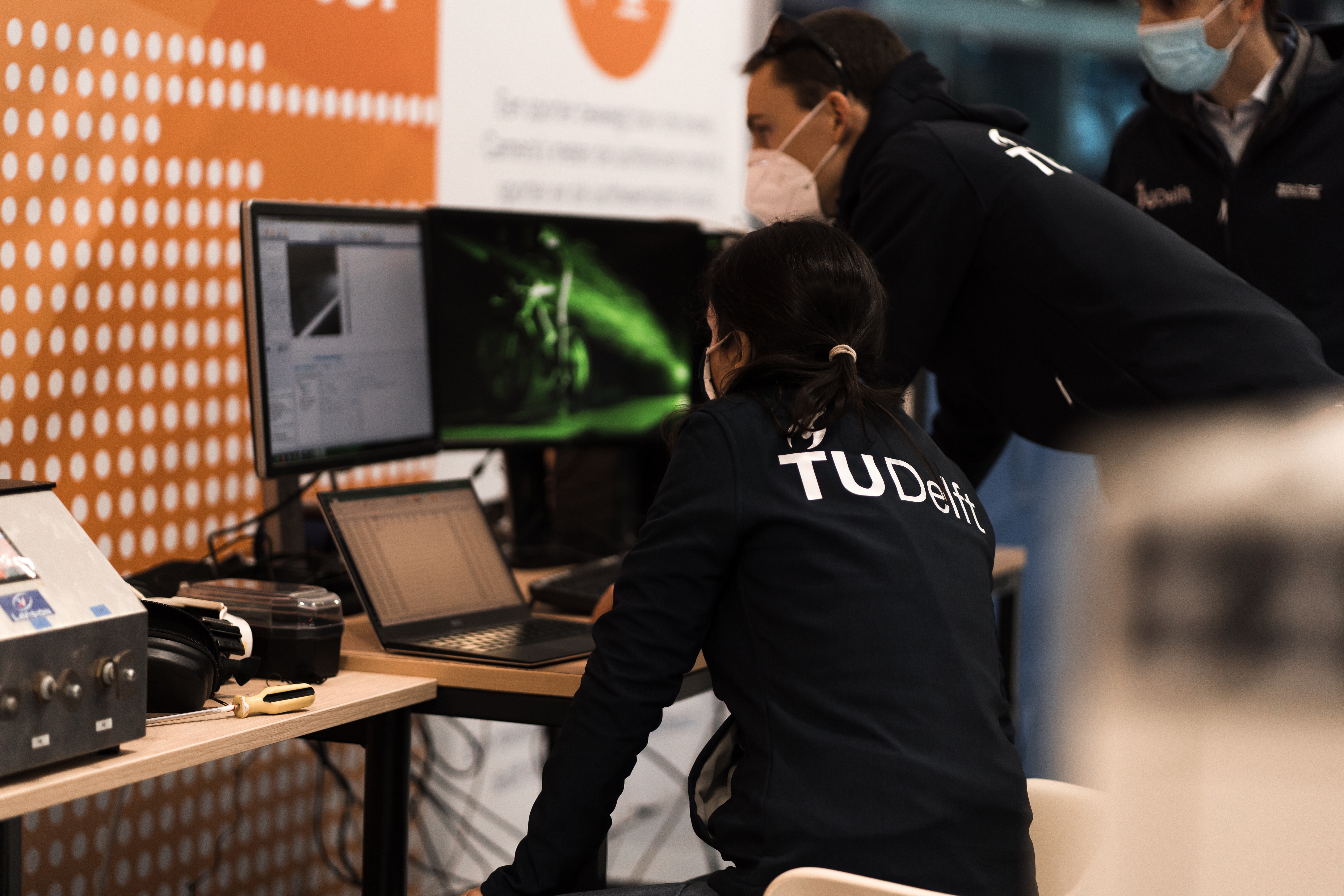 Even though the tailwind measured falls within the norm set by NOC*NSF for a multidisciplinary sports facility, the results give rise to many follow-up questions. Spoelstra recommends that a more extensive follow-up study be carried out. “One limitation of the measuring method used is that it only measures the airflow at one specific location on the ice skating track. It is important to know whether the measured airflow is constant on the entire track. We recommend that other factors should also be studied, such as the airflow created by other skaters on the track and the spectators, which may have just as much influence. It would also be useful to widen the follow-up study and not restrict it only to the Thialf stadium. Every indoor stadium has a ventilation system which creates an airflow. Thialf is the first place where this airflow has been measured. If the study were to be expanded to include other ice stadiums where international races are held, it would put the results into perspective and could be a first step to establishing norms for speed skating events.”