A parking lot with solar panels where renewable energy generation, electric charging and energy storage are cleverly integrated. In the municipality of Dronten, the official opening of a parking lot with 1,100 solar panels is taking place today. In combination with a large battery, the solar parking place will make the town hall energy-neutral. TU Delft researcher Rishabh Ghotge and master's student Kaja Tegtmeier are developing a dashboard for this project, with which they can accurately monitor the saved CO2 emissions of the terrain.

As of today, 120 cars can park at the Dronten city hall under a canopy made entirely of solar panels. There are 16 charging stations for electric cars. In order to provide those cars with sustainable power even during cloudy days, a large battery will store the peaks in electric power. Researcher Rishabh Ghotge, together with master student Kaja Tegtmeier, is developing a dashboard to provide insight into the functioning of the battery and its contribution to offsetting CO2 emissions. Ghotge: 'Previously, the number of units of energy produced was used to calculate the amount of CO2 saved. In this project, we are really looking at the combination of the output of the solar panels and the functioning of the battery, in order to better determine the CO2 savings. 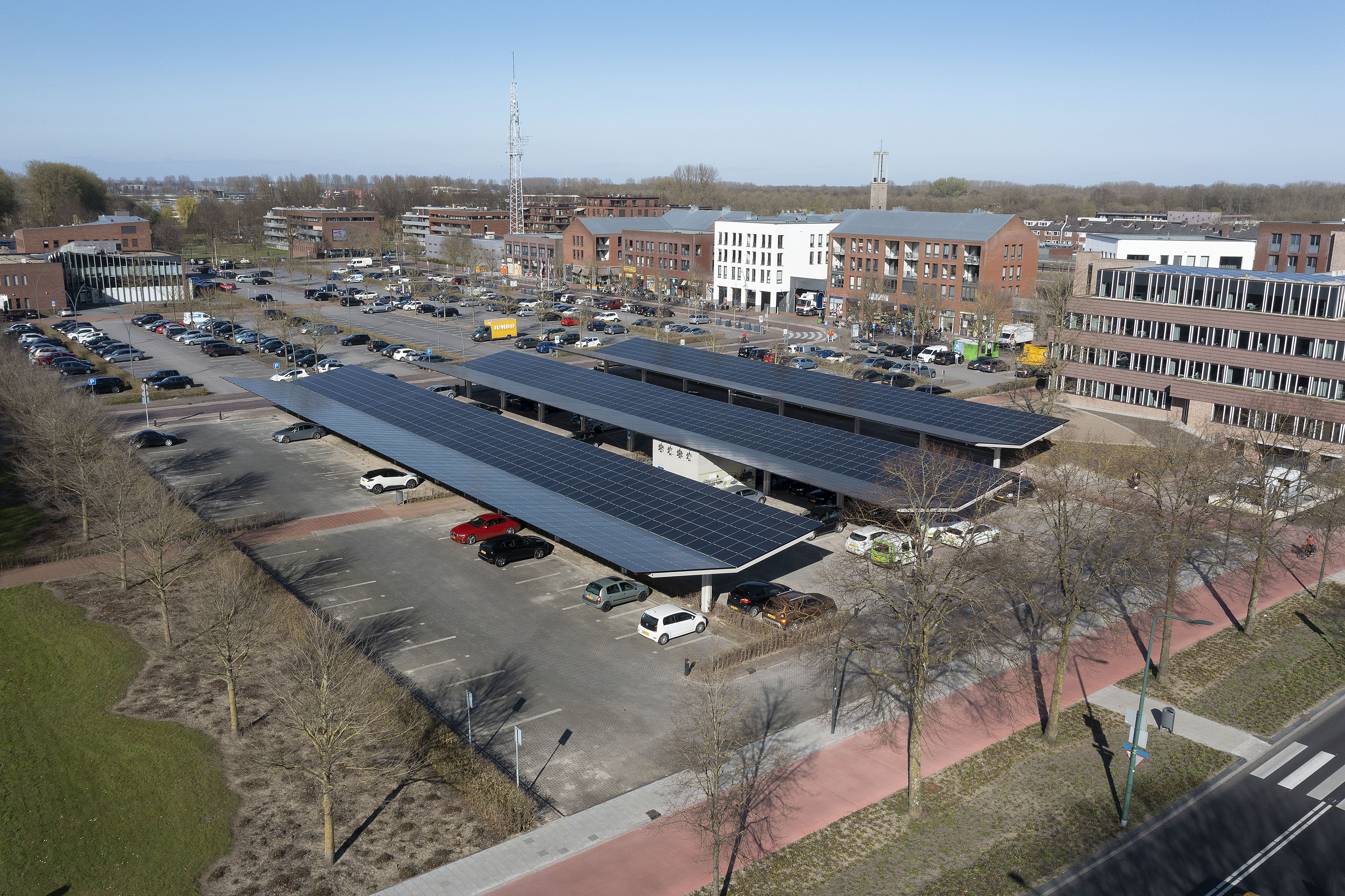 Kaja Tegtmeier: 'We will monitor in real time how much energy is used in the parking and how much of that energy is generated by the solar panels and how much is sourced from the grid. We use this data to calculate the CO2 offset in realtime, for which we have developed a new method.' In this way the stakeholders in the project are informed about the CO2 reduction through the project on a continuous basis. Kaja will also make a scenario of the performance of the system in the future – in 2030. By accurately modelling demonstrating how much CO2 energy will be saved and visualising it for project stakeholders, the research can inspire other governments, municipalities and companies to construct solar parking lots in the future.

The parking lot in Dronten is part of the larger PowerParking project, which Rishabh Ghotge joined as a researcher from 2017. The idea behind this project is to use parking spaces as efficiently as possible, by equipping them with solar panels and using the parked, electric cars as batteries. This can be done by allowing the electric cars, which are fully charged with solar energy, to feed their electricity back into the grid when needed. Rishabh Ghotge: "There is more potential in the batteries of cars than just their use for transportation. You can discharge the batteries, when the cars are parked, when the energy is needed in the same electricity grid.' In Dronten, the cars will not yet deliver their energy back to the grid. The current generation of electric cars is not yet suitable for this. The large battery replaces this function to still provide the electric vehicles and the town hall with stored solar energy when it is cloudy weather.

On the TU Delft campus, The Green Village is an important testing ground for the PowerParking project. Ghotge has a small version of the solar parking lot there, where two cars can park and charge. On that small scale, it is possible to test what exactly happens when you want to charge an electric car, but also use it as a battery. Ghotge: "We need to coordinate the electrical currents properly and develop the right computer scripts for that. The parking lot has to know when to charge, or supply power back." In this way, Ghotge is working on the development of future solar parking lots.

The PowerParking project is an EFRO (European Regional Development Fund) project in which various partners are collaborating: Flevoland province, Dronten municipality, TU Delft, Eneco, Lelystad Airport, Lelystad Airport Businesspark, Alfen and Pontis Engineering. The ERDF project is being financed from the Opportunities for West II program, with co-financing from the Ministry of Economic Affairs and Climate, Flevoland Province and all partners.