Marcel Kempers is on a mission: he wants thirty percent of the oceans to be under protection by 2030, allowing timely intervention should climate change or environmental pollution puts certain ecosystems at risk. Currently, only 8 percent is protected. Reef Support, the company he founded together with Yohan Runhaar, is working towards making this happen. This week, at the ClimateLaunchpad Global Finals, he will pitch his masterplan to save the coral reefs. “We can do this!”

The Reef Support website features a real-time counter indicating the percentage of coral reefs remaining: just over 46 percent on 25 October 2021, and decreasing slowly. It underscores the urgency. Globally, more than 200 million people depend on the coral reefs, for their livelihood and as a natural barrier against high tides and waves. “Nearly all coral will be at risk by 2050 if we don’t take any action now”, Kempers says.

The student – 24 years old and pursuing a master at the faculty of Technology, Policy and Management after having completed a bachelor’s in aerospace engineering – and his team have developed a platform for monitoring the health of coral reefs. Right now, such monitoring is a laborious manual process in which divers make photographs. But Reef Support will use satellite imagery and artificial intelligence. Earth observation imagery provides a wealth of information about underwater life: water temperature, water colour and its salinity.

The start-up will use AI to analyse and classify these images, providing data on the state of coral reefs. Affiliated partners have easy access to the platform that makes these data available. This includes fishing companies and the touristic service sector, as these are also dependent on healthy coral reefs. Diving schools and hotels can, for instance, use the platform to coordinate their ecotourism activities.

Only a fraction of the coral reefs is currently being monitored. “The bottleneck is a lack of resources and manpower”, Kempers says. It takes a lot of time and effort to acquire good coral imagery, and these images aren’t aggregated in a central database. “Our platform will be a gamechanger.” The underlying technology will speed up data acquisition from days to hours. He hopes that the use of underwater robots will accelerate this process even further. Using this technology, divers will no longer be exposed to risky underwater circumstances to take photos. Kempers envisages a collaboration with Lobster, the TU Delft student project that is developing a suitable robot for underwater data collection. 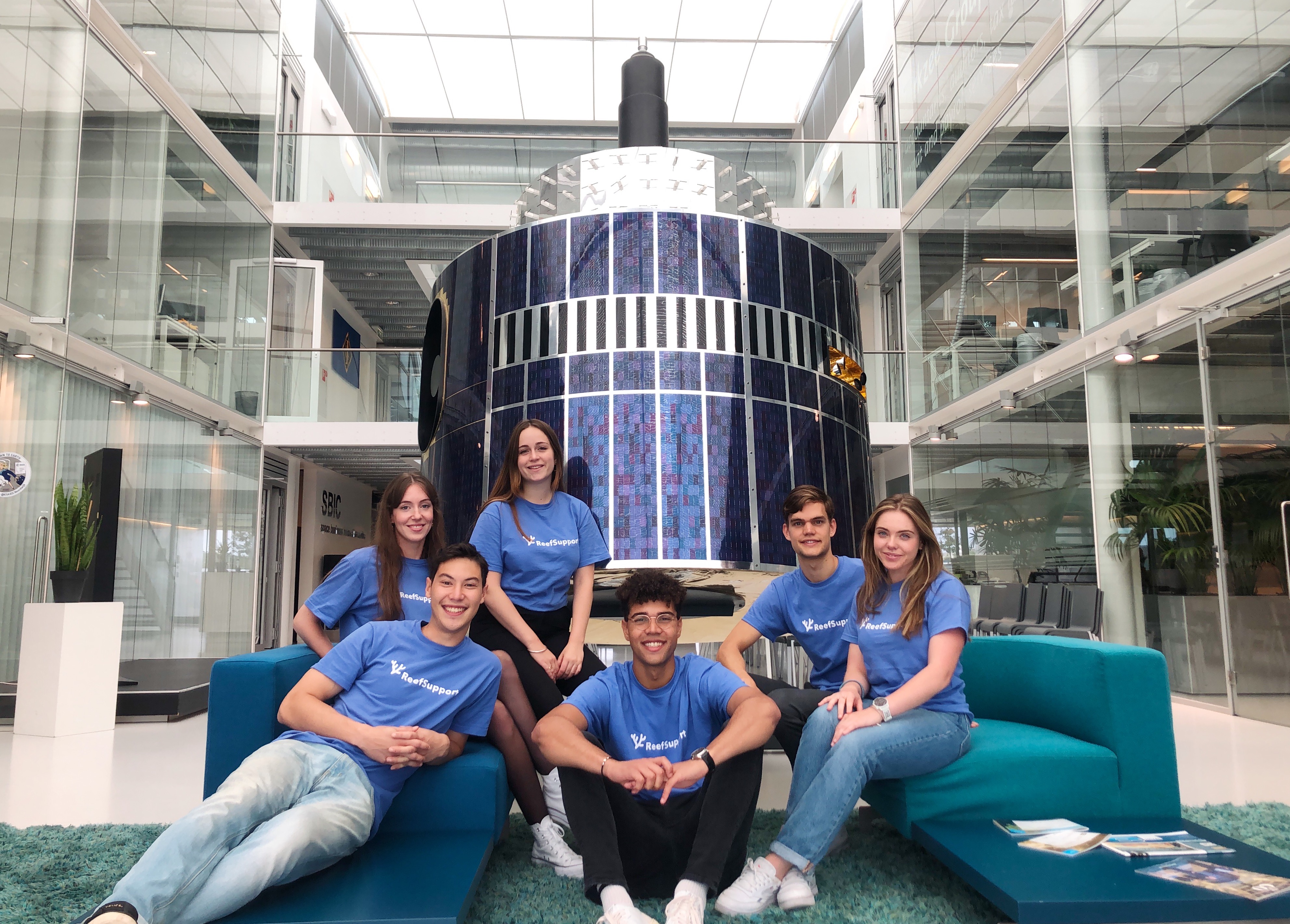 The Reef Support team. Founder Marcel on the front left.

Having been raised in Singapore, the student-entrepreneur was a first-hand witness of what happens when coral reefs die. “At Lombok in Indonesia, I worked on a project with farmers. When the coral reefs died, they suffered from increasing floods. Fish disappeared as well, so they were no longer able to make a living.”

In May this year, Kempers founded Reef Support. He has already assembled an international team, including two marine-biologists: one of them in Singapore, the other at Saba. While building his company, the brand-new entrepreneur reached the finals of ClimateLaunchpad – the global green business ideas competition that is supported by TU Delft.

Not only did his participation lead to increased enthusiasm and motivation, it also yielded valuable insights. “We went into great depth with our business case; who are our potential customers and how do we uncover their needs and wants. It was a real eyeopener.”

Over the next five years, Kempers aims to develop a good product for potential customers. At the same time, he hopes to increase global awareness of the dangers of coral reefs that are sick and dying. In one of his projects, he artificially grows coral on land. “In the upcoming months, we expect to plant 5000 baby corals in a new lab at Lombok”, he says. The project involves four TU Delft students who enrolled in the minor program on International Entrepreneurship & Development.

“It will be the first coral lab in the region”, he adds with great enthusiasm. The lab will research how a rising sea temperature affects the bleaching and dying of coral reefs. “We want to expose corals to increased temperatures at an early age within a controlled environment. They will then be accustomed to these temperatures when we plant them in the sea.

A method to stimulate growth
The lab will also research a so-called micro-fragmentation technique in which the corals are broken into smaller pieces to stimulate their growth. “Corals will grow 20 to 50 times faster, allowing us to accelerate global coral reef recovery,’ Kempers says.

He stresses that the fight against climate change is all but over, making the lab more than a testbed for turbocharged corals. “It is a beacon for the future.”