A toolbox for quantum acoustics experiments

Optical fibers and waveguides allow the transmission of quantum information encoded in optical photons. They have become an indispensable technology not only of quantum optics experiments and applications, but also for modern classical communication. Realizing the equivalent components for mechanical excitations has a similar potential to revolutionize the nascent field of quantum acoustics and phononics. Such low-loss phononic waveguides will not only allow to guide and transmit (quantum) information encoded in phonons over tens of centimeters on a chip, but will form the basis for full coherent control over traveling mechanical excitations. Creating such a toolbox for quantum acoustics experiments will have a profound impact on quantum physics and allow for fundamentally new ways of interacting with quantum systems. Importantly, these acoustic waves are fundamentally different from the oscillation of single atoms or ions in traps, due to the associated large mass, their propagating character and the possibility to couple to a large variety of other quantum systems like quantum dots and superconducting qubits. Guiding single phonons is a crucial step towards realizing hybrid quantum devices and transfer quantum information over heterogeneous networks.

Over the past years, the group of Simon Groeblacher in the Department of Quantum Nanoscience has demonstrated the possibility to create, store and detect single phonons in photonic/phononic crystal devices, using radiation-pressure optomechanical interactions. Amirparsa Zivari and colleagues have now designed and realized the first waveguide for non-classical traveling mechanical excitations, which was published in Nature Physics. By fabricated the waveguide from thin film silicon they combine the waveguide with a source and detector for non-classical mechanical states, and were able to verify the propagation of these quantum states in the waveguide. These acoustic waves at GHz frequencies are guided in a highly confined nanoscale geometries, with long lifetimes (up to several ms), in particular at low temperatures, enabling the faithful transport of quantum states over centimeter distances on a chip. They further show how non-classical correlations emerging from phonons launched at different times are conserved throughout the propagation in our waveguide, by realizing a phononic First-In-First-Out (FIFO) quantum memory. 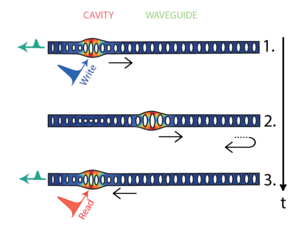 Image Captions:
Sketch of creating (1) a traveling single phonon inside a waveguide (2), which can then be detected (3) after reflecting off the end of the waveguide.