On Friday 14 January, TU Delft celebrated its 180th Dies Natalis, or birthday. The university has chosen ‘speeding up the energy transition’ as theme for the anniversary celebrations, which will continue over 180 days after Friday’s official Dies Natalis ceremony. Following tradition, three honorary doctorates were awarded during the ceremony. University symbol Prometheus also featured large in the online event.

Rector Magnificus/President of the Board Tim van der Hagen hosted the event, which was held online for the second year running, in accordance with current Covid-19 measures. He was joined by a surprising co-host: university symbol Prometheus made an appearance. In Greek mythology, Titan Prometheus stole fire from Zeus and gave it to humankind, enabling humans to develop technology. The flame in TU Delft’s logo symbolises our drive to pursue knowledge and understand the world around us, and the kindling of that same fire in ever new generations of students.

Speeding up the energy transition

The energy transition is a major factor in the fight against climate change. With 1,000 energy scientists, TU Delft wants to use its knowledge and expertise to accelerate the success of the energy transition. ‘Speeding up the Energy Transition’ was therefore the theme of the Dies Natalis celebrations, and is also the theme of the 180 days of anniversary celebrations that will follow the event. However, the energy transition is a huge undertaking that will only succeed by means of cooperation within and outside the scientific community, and by joining forces with industry, governments, alumni and all other stakeholders. So rather than a private party, the celebrations will be a call for joint action and collaboration.

To underline the complexity of the energy transition, TU Delft awarded three honorary doctorates to people who have made their mark in different aspects of it. Jürgen Janek, Professor of Physical Chemistry at the Justus Liebig University in Giessen, Germany, was singled out for his fundamental work on new battery technologies such as Solid State Electrochemistry. Solid state batteries comprise a fixed electrode and a fixed electrolyte. With higher energy density and a longer lifespan than conventional lithium-ion batteries, they can also withstand higher temperatures. “Professor Janek recognised very early on that this was a crucial field for the energy transition. Solid state batteries show a lot of promise, but also know a lot of challenges. He addresses these challenges systematically and reveals the fundamental mechanisms behind them. He also created an overview of the state of the art in solid state batteries that can inform our vision on which direction to take. His work has been driving the field,” said honorary promotor Professor Marnix Wagemaker. 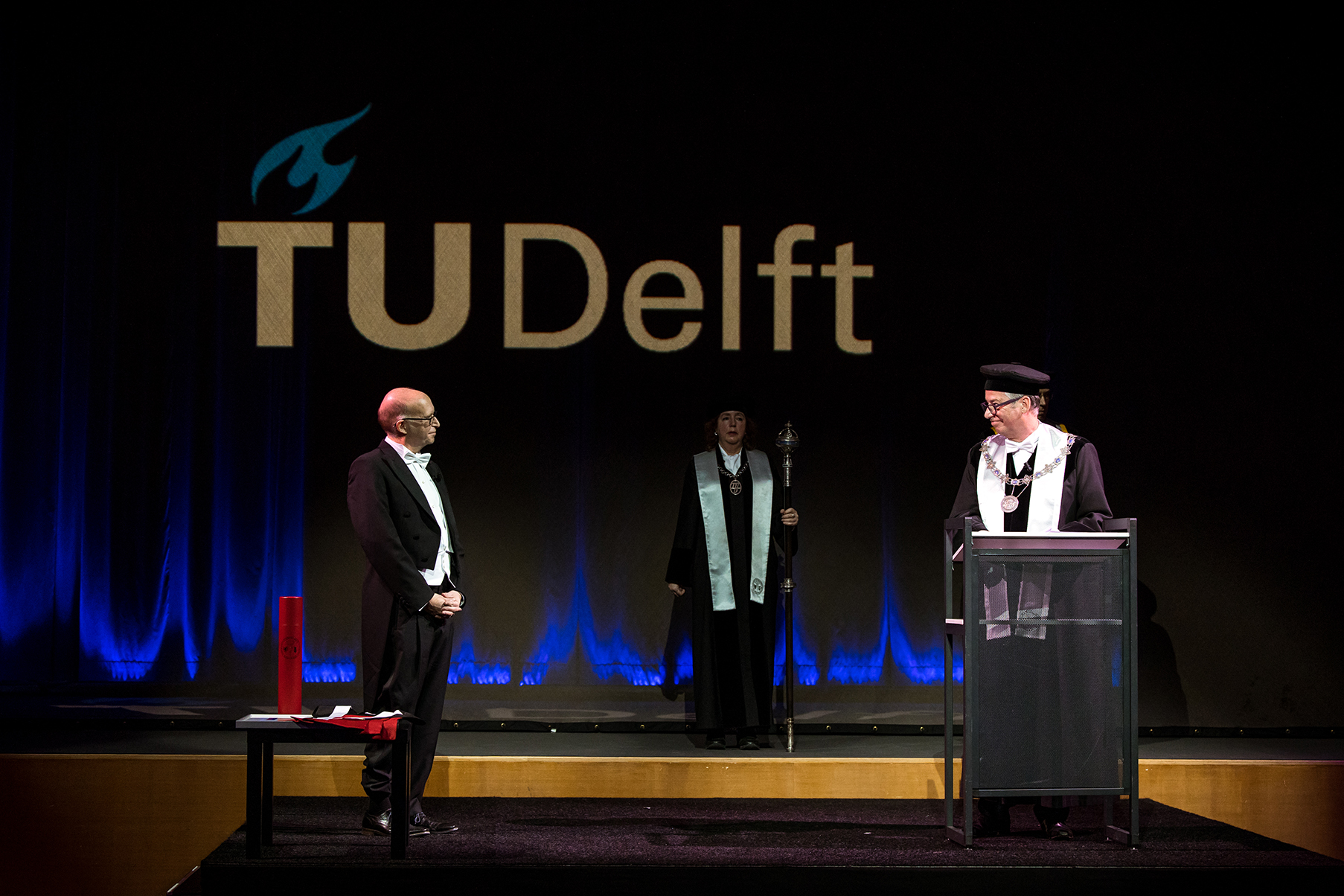 CEO of the US carbon recycling company LanzaTech Jennifer Holmgren was awarded a doctorate in recognition of her pioneering work on Industrial Biotechnology. “She is one of the frontrunners in the new field of sustainable aviation fuels. Batteries are not a viable solution for long-distance flights. We need a sustainable fuel that can be stored on board an aircraft, and with her company Jennifer Holmgren is using biotechnology to create a solution. In doing so, she is turning her extensive scientific expertise into real innovation. She is worthy of an honorary doctorate for her work, and for the way she inspires people through it,” said honorary promotor Professor Henri Werij. 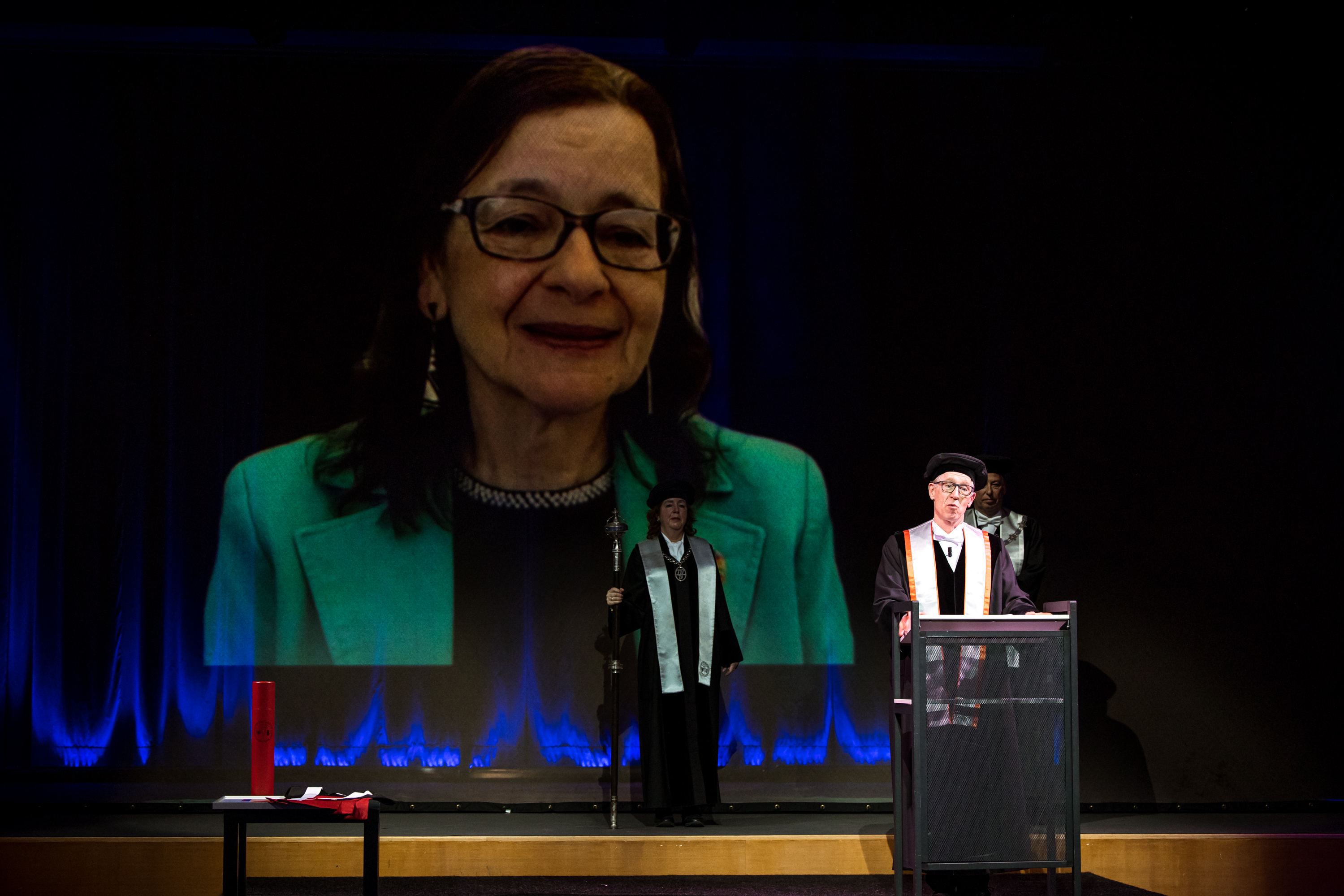 European Commissioner Frans Timmermans received an honorary doctorate for his societal achievements in tackling climate change. “We honour Frans Timmermans for his relentless efforts to put combatting climate change on the European agenda. He is the driving force behind the visionary and ambitious policy document Fit for 55, setting out Europe’s target of 55% fewer emissions by 2030. He has garnered support for this document from nations, industries, public stakeholders and knowledge institutions. Without such a vision, the energy transition – which is a large part of the solution in combatting climate change – would proceed much slower. The policies and instruments in Fit for 55 will enable Europe to become a world leader in combatting climate change,” said honorary promotor Professor Paulien Herder. 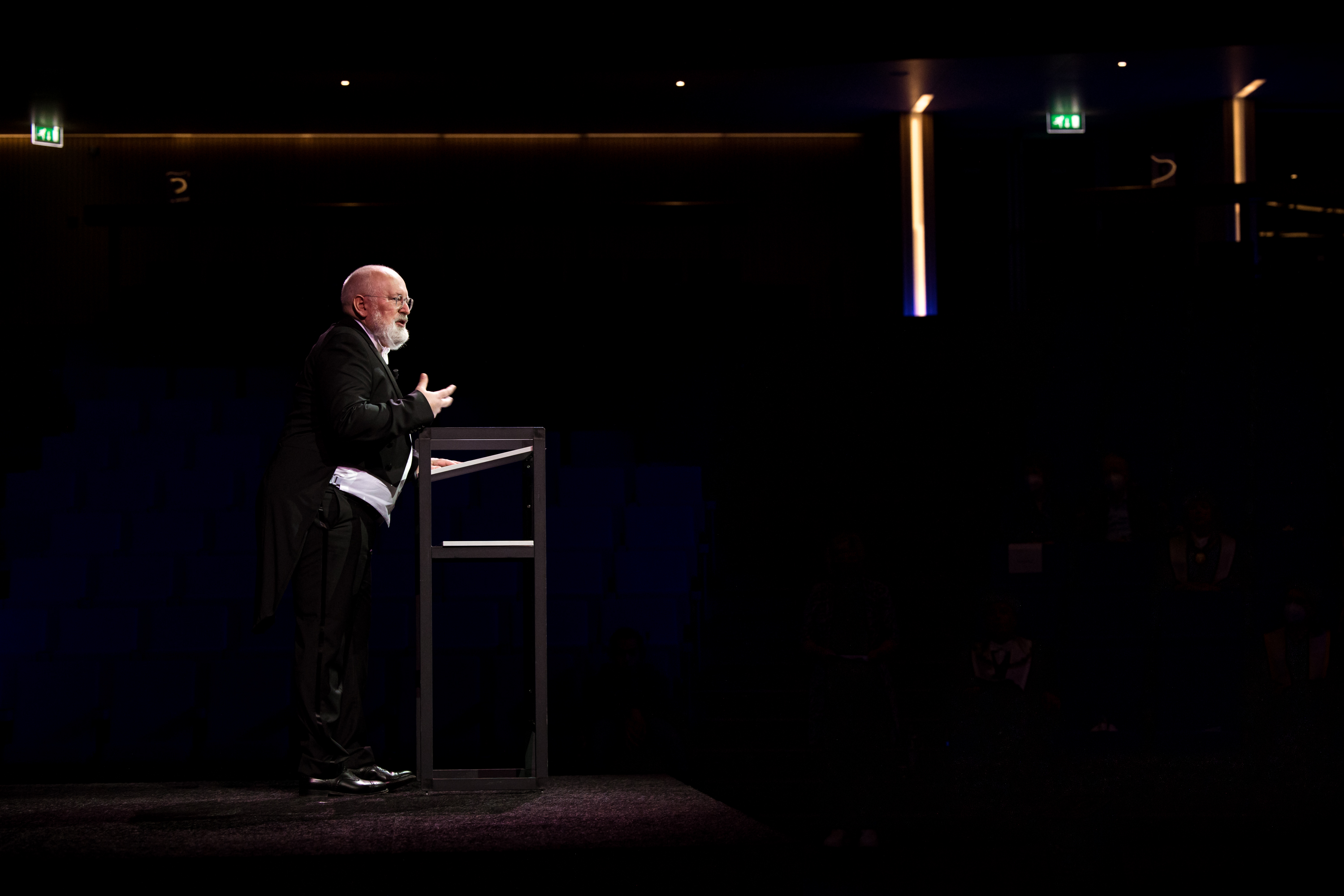 TU Delft’s Energy Accelerator Team was also introduced during the event. This multidisciplinary team of ten talented energy scientists will spearhead the university’s effort to speed up the energy transition during the coming 180 days and beyond. The team represents the width and breadth of the energy research at the university. It is precisely because of this multidisciplinary approach that  TU Delft can make a difference.  Much more than new technology alone, the energy transition involves everything from new policies to changing behaviour. Moreover, TU Delft’s research extends from the molecular to the systems level, and from fundamental research to field labs, so new research findings can be developed into innovations that make their way from the lab into society.

For questions about the official Dies Natalis ceremony, and TU Delft's ambition to accelerate the energy transition, please contact: