This project is part of a larger ERC project in which quantitative understanding of the hydrodynamics of gas-fluidised systems of non-spherical granular particles will be achieved through a combination of modelling and experimentation, with an emphasis on modelling. The models range from detailed models of particle and fluid interactions, to more coarse-grained models, which use correlations obtained from the fundamental models, for large-scale applications. The models are validated experimentally, using state-of-the-art non-invasive techniques such as particle image velocimetry, digital image analysis and magnetic particle tracking.

This particular project aims at a full understanding of the hydrodynamics of fluidized beds containing non spherical (rod-like) particles. The main task of this project is to implement a DPM code for rod-like particles, incorporate new drag relations for translational and rotational hydrodynamic forces (obtained from DNS simulations), and to validate these closures using PIV/DIA measurements. Experiments are to be performed in a quasi2D fluidized bed for spherocylinder particles with aspect ratio 4 for investigating pressure drop and other hydrodynamic parameters. Novel concepts will be the inclusion of wall proximity effects (e.g. lift forces and particle orientation effects) for non-spherical particles and the detection of particle orientation and angular velocity using PIV/DIA.

Figure 2.Snapshot of a CFD-DEM simulation of bubbling fluidized bed of spherocylinder particles. 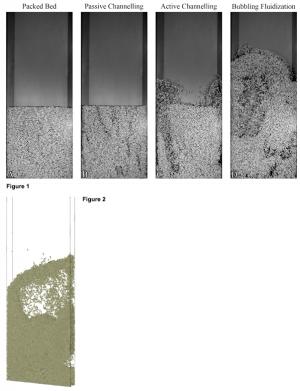