How can you make sure that after 18 years a course is just as stimulating as the first time you taught it? Arend Schwab decided it was time for a drastic change and introduced ‘Multibody Dynamics’. That transformed the course from something bookish to a successful one-man band with live streaming on YouTube. 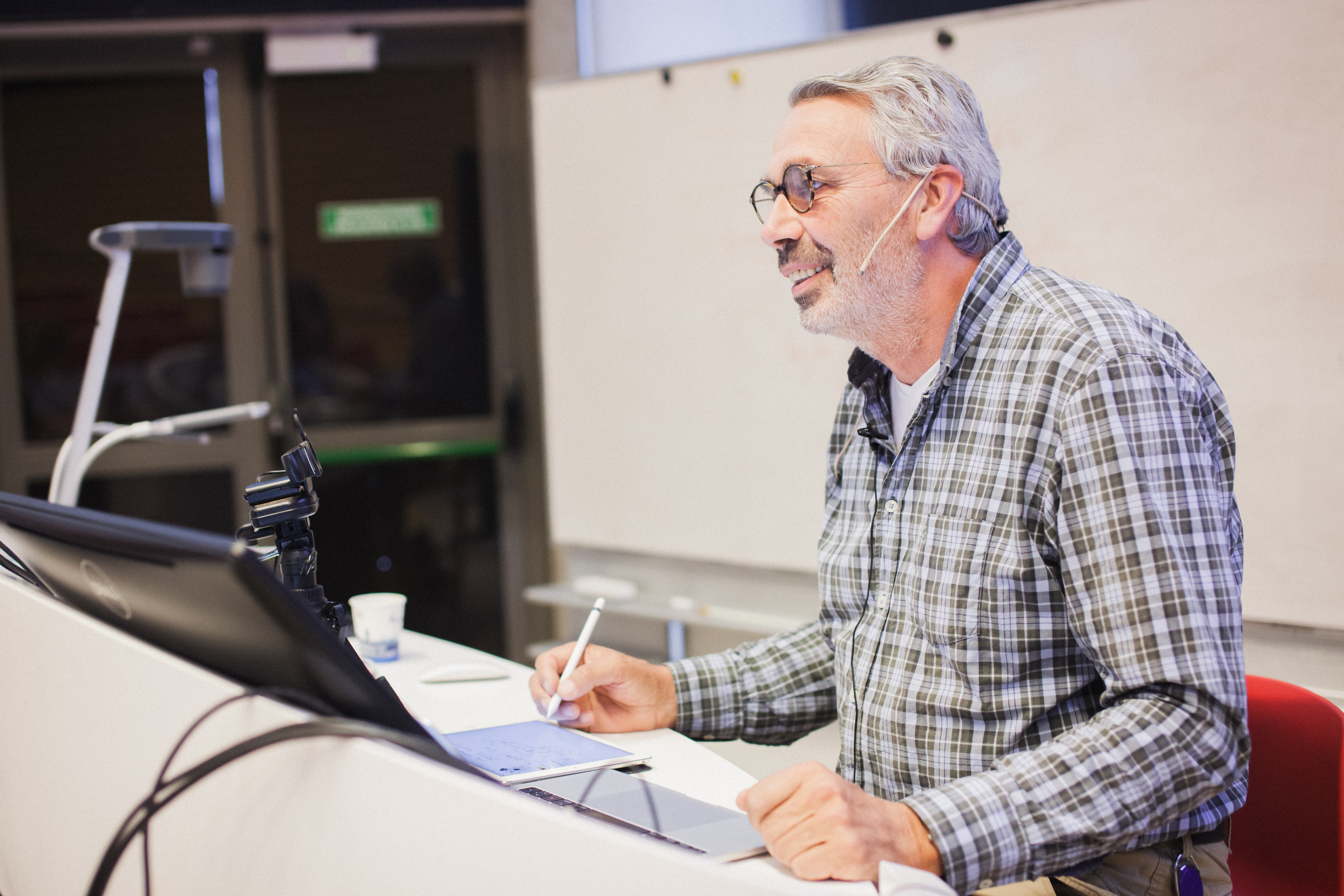 Arend Schwab was already being innovative 18 years ago when he had 20 students do homework. ‘I saw something at Cornell University during a sabbatical and wanted to try it out at TU Delft as well. Actually it was not done, because at TU that kind of thing was considered too bookish. But I knew from what I saw in the States that it worked.’ For years the course was a success, but at a certain point it started to ‘burst at the seams’, Schwab says. In the meantime, the number of students in the classroom had risen from 20 to 200. ‘And they were all there to hand in homework and participate in the in-class quiz. That was not working well anymore, especially not for students doing internships or wanting to study abroad for a while.’

Drastic change
It was time for a drastic change, but what exactly? Schwab talked about it with an American colleague. ‘That helped a lot. He said I should view my students as customers, who were not happy with my service. So I started to listen to their needs and wishes. ’ What mainly emerged from the talks with the students is that mandatory attendance annoyed them. They wanted to follow the class at a time that suited them and at a place that suited them. That gave Schwab the idea to offer fully digital classes. He was already familiar with ‘collegerama’, but he was looking for other functionality.

Schwab soon discovered that live streaming a system with a laptop, camera, microphone and digital quizzes on YouTube for the first time is quite tricky. ‘When you teach a class, you walk back and forth and use your hands a lot to convey your point. But that looks really weird during a broadcast. So now I sit very quietly and calmly during live broadcasts.’

Stress
At first Schwab spent a great deal of time learning how to operate all of the devices. ‘You have to choose all of the software yourself, and what works at home doesn’t necessarily work at the university. If the Siri search programme suddenly goes on during a live stream, then that can be pretty stressful. But now I have everything under control and it isn’t costing me any additional time anymore. I also received a lot of help from my children, who are used to doing everything on YouTube.’

This is the third year that Schwab is offering his digital class, and both he and his students are extremely enthusiastic about the revamped course. Students can watch the classes again from anywhere and therefore see online how Schwab arrives at his calculations. As a result, students can easily follow the broadcast outside of the classroom, though Schwab believes it is more pleasant for the people that are actually in the classroom.

There’s a calm atmosphere, which makes the students calmer too, and there’s more room for discussion. It’s kind of similar to when I started the course 18 years ago. Now I’ve got 20 to 30 students in the room again, and the rest follows it elsewhere, but does participate interactively with the online quiz questions 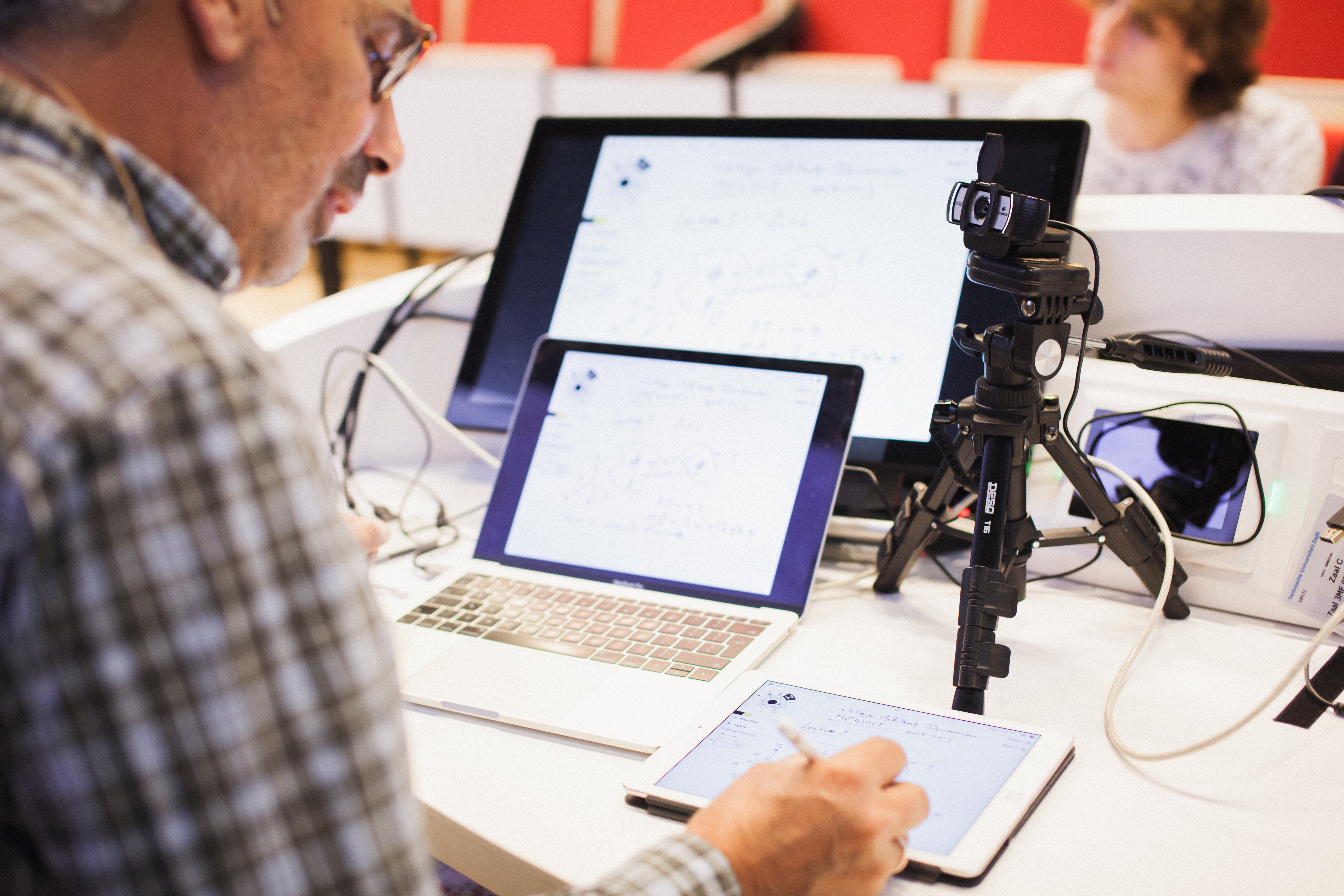 For example, Schwab can see how many students have logged in for the online class. Those participating in the online quiz get points, and there are bonus points for anyone who gets an answer right. ‘And that stimulates them, because about 160 to 180 students log in each time.’

The online class gives students more opportunities, Schwab says. ‘Some of them still come to the classes, while others follow them at home. And some students even rent a small room where they can watch the broadcast together as if it’s a live stream of a football match. Before the course changed, students were negative about the classes, which upset me as well. But now that they’re satisfied, I’ve become enthusiastic about the course again too. And that’s really nice if you’ve been reaching a class for such a long time.’

Good results
Apart from a better atmosphere, Schwab has noticed that the students’ results are improving as well. Many students used to fail or quit the course. Now few of them quit and the majority pass the course because they keep up with the material, and everything can be found and tested in an extremely well-structured environment online. That’s why Schwab considers this type of teaching a massive improvement and recommends it to colleagues struggling with a lack of space and large numbers of students.

But in his opinion it would be going too far to only offer courses without students in the classroom. He was at a conference in Scandinavia and gave a class without any students. ‘That was really strange and unnatural, as if you’re talking to yourself. Ultimately it’s definitely more pleasant to tell your story to students and have discussions with each other.’