The latest bone prosthetics are 3D-printed. They are custom made and have pores which are invaded by bone cells. Yet, materials scientist Amir Zadpoor believes the implants can become even more effective - by using origami of biomaterials.

The surgeon steps back for a moment. Gently a scanner spins over and around the patient on the operating table. Equipment in the corner awakens and spits out a peculiar flat sheet with gaps and strips. It falls into a jar filled with liquid and starts to swell and fold. After a few minutes, it perfectly fits the cavity the surgeon just had to make to remove a large bone tumour. The prosthetic is quickly clicked in place.

This is how Amir Zadpoor, materials scientist at Delft University of Technology, envisions the future of 3D-printed implants. “The prosthetics will consist of a layered, porous material that easily adheres to natural bone”, he predicts. “The pores will be quickly occupied by new, healthy bone. Within months the implant will be almost indistinguishable from real bone, and will last a lifetime.”

It’s a long way off, acknowledges Zadpoor. But also a logic next step in what is happening in the clinic today. Custom made 3D-printed prosthetics are already rescuing patients own bone. Sander Dijkstra, orthopaedic surgeon at Leiden University Medical Center: “Just a few days ago, one of my patients told me that he had been jogging again. That’s wonderful and very rewarding.” Before the introduction of 3D-printed implants Dijkstra always had to remove the total knee joint of people with a large malignant tumour in the femur. “Especially for young people it is a terrible prospect to never be able to run again.”

The 3D-printed prosthetics that Dijkstra currently uses are partially porous. That is the result of research by materials scientists such as Zadpoor: “We helped developing 3D-printing techniques for porous, yet strong implants. Because of the porosity, the surface of these implants is many times larger, which means that the antibacterial surface coating is many times more effective. Moreover, bone cells can settle down in the pores.  That provides a better integration with the body and strengthens the implant.”

All a very welcome improvements, finds Dijkstra. Currently, one in every seven implants needs to be replaced. “Implants may loosen and wear out. Young patients in particular run the risk of having a prosthetic replaced later in their life.” 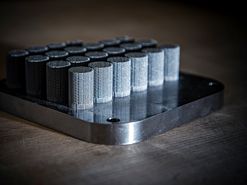 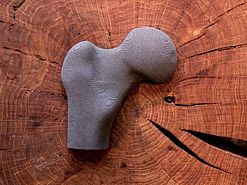 When 3D-printed prosthetics last longer, why isn’t every implant printed? Zadpoor: “At the moment, these implants are still relatively expensive because their manufacturing involves many specialists. I expect costs to decline substantially over the coming years. After that, standard implants could indeed also be printed.”

Still, Zadpoor doesn’t expect to see 3D-printed hip replacements on the market any time soon. “Those kinds of implants are extremely optimized products causing very few complications. To replace them, benefits need to be large and proved conclusively. That requires long-term research.”

At the moment Dijkstra places a 3D-printed prosthetic about once every four months. It is certainly no standard procedure. The orthopaedist is one of the pioneers. The 3D-printer doesn’t stand in the surgery yet, but at a specialized company called Implantcast (Germany). Dijkstra: “We make a CT-scan of the affected bone and decide which part needs to be removed. Using specialized software, we design a prosthesis that will perfectly fit on the remaining bone above the knee. The top is attached to a standard pin which is anchored to the healthy upper part of the femur.”

The whole procedure from design to surgery takes about seven weeks. Doctors and engineers deliberate at several stages on the optimal design of the implant. In the meantime, the patient receives chemo therapy to treat possible metastases. The group of patients that qualify for a 3D-prosthetic is small: young people with severe bone tumours. And the technique is only used when standard implants provide no satisfactory solution. Dijkstra has also replaced half a shoulder blade and part of a pelvis – bones for which no standard prosthetics exist.

Dijkstra: “A new product always comes with a risk. An unknown, unexpected weakness may present itself over time. As a physician, I’m well aware of that. We first treat patients that will gain the most by a 3D-printed implant and follow them closely over a longer period in time.” Also a copy is manufactured of every 3D-printed implant Dijkstra places. Scientists at the Delft laboratories examine if it could be improved further.

Zadpoor wants to fuse 3D-printed prosthetics even further with the body. To achieve that, the material scientist wants the ‘impossible’. For about ten years, it’s evident that a particular surface pattern on implants can stimulate the growth of bone cells. Probably, the cells like to attach to this particular surface because it resembles natural bone well. Zadpoor wants to incorporate this pattern in the pores of 3D-printed implants.

However, it’s a nanopattern: ridges with a height of only a few thousands of a millimetre. Zadpoor: “Such a nanotopography can be created with techniques from the semiconductor industry, but only on flat surfaces. The technique is not compatible with 3D-printing.” Zadpoor wants to resolve this problem with ‘self-folding materials’. “Think of origami”, Zadpoor starts his explanation. “You start with a flat piece of paper, but end up with a highly complex folded form.”

The idea is to print flat structures and apply the desired nanopattern onto them. Then a folding trick applied. The printed material is made from various layers of passive and active polymers. These materials shrink or swell when the temperature rises, when they become moist or when light is falling upon them. Zadpoor: “We combine the metamaterials in such a way that flat objects spontaneously fold themselves or roll up.”

The European Union granted Zadpoors idea in 2015 with 1.5 million euro (ERC-grant). Recently, the first visible results were delivered: a staircase-like shape that turns into a DNA-like structure under water and a cellular structure that transforms into a patterned shape. But how do these origami materials result in the porous 3D-printed implants with nanotopograhy that will help patients? Zadpoor: “This is fundamental research. We have now provided proof-of-principle in how 2D-materials can fold themselves into 3D-structures. It will take a lot of further experiments to finally create the durable implants we want.”

To reach that final goal, Zadpoor cooperates with several hospitals in and outside the region and with large and small businesses. He also participates in large, international research projects such as the recently started PRosPERoS (PRinting PERsonalized orthopaedic implantS) with a budget of nearly five million euros. Zadpoor's laboratory in Delft has become an important hub in the development of new biomaterials. Yet, he could easily have worked at SpaceX or Boeing. Zadpoor holds a PhD-degree in Aerospace Engineering. “Six years ago, I made a well-considered decision to switch from aircraft materials to biomaterials. After all, nothing is more rewarding than to help curing people.” 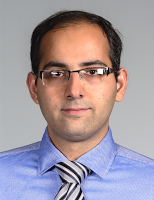