In 2030 the captain will be sitting somewhere onshore instead of on his ship. From his sophisticated wheelhouse, which will look like the inside of an air traffic control tower, he will survey all ships that want to enter the port of Rotterdam. By moving his fingers across the touchscreen in front of him, he will access detailed information about each vessel, about its course and speed, for example. The captain will be barely involved in the logistics of it all anymore, because in the future ships will synchronise their schedule with container terminals, locks and bridges. He won’t need to stand at the helm anymore either, nor will there be any need for sailors on board. Instead, vessels will establish contact themselves with their commander when, for example, it’s very busy on the water and they have ended up in a precarious situation. Or if a part breaks down. That’s when the captain will take over again. As a result, he will be able to navigate multiple ships simultaneously.

The major advantage of unmanned boats is that it reduces the cost of transporting cargo by forty per cent. ‘As a result, cargo will be transported more often by ship than by car,’ says Rudy Negenborn, researcher of automatic control for transport engineering and logistics at TU Delft’s 3mE Faculty. That right there is one of the most important social benefits of autonomous boats. Moreover, it dovetails with the European objective of making cargo transport more sustainable: by taking it off the roads and onto water and railway tracks. To give an example of more sustainable logistics: in ports, containers could be moved more often by autonomous ships instead of autonomous transport vehicles. ‘If you can lower the cost of transport by water even more, then it really is a more attractive option.’ 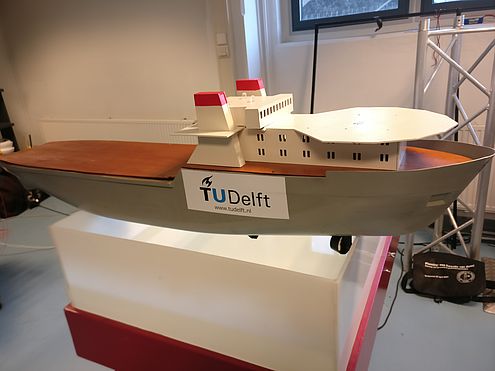 The costs can be reduced in another way as well: because ships, container terminals, bridges, locks and other parties in the port automatically exchange information with each other, they can agree on how fast ships will move to a given destination and which form of navigation they will use to pick up and deliver their cargo. This kind of centralised coordination is still lacking right now. ‘All inland vessels let the terminals know what time they’re going to arrive. But if the crane on the quay isn’t working up to speed, then delays are inevitable,’ says Negenborn. The rise of increasingly large cargo ships means that soon there will be higher peaks in the number of containers that are being delivered, which will cause greater queues in ports. High time, in other words, for better coordination, which will make the entire port area more efficient and ensure that goods are delivered according to schedule more often. It’s one of the most important research areas at the Delft University of Technology.

Autonomous boats are also safer, according to the scientists at Delft. ‘Currently, 75 to 95 per cent of all accidents at sea are partly caused by human error,’ says Robert Hekkenberg, researcher of maritime technology. He shows a picture of an accident in the English Channel, one of the busiest shipping routes in the world, in which two ships collided with each other. ‘It happened because the crew wasn’t paying enough attention. After one of the ships sank, three more banged against them. We can prevent this kind of human error in the future by automating things, including navigation.’

But how realistic is this future, if you consider that the law in 150 countries prescribes that there always be a crew on board? Hekkenberg believes that the legal framework will have been adapted by 2030.

Completely redesigning ships is at least as much of a challenge, because they were originally conceived to be operated by a crew. ‘If there are people on board, they can walk through the complex machine installation, put their hands against it, listen to what is happening, replace a filter and make minor repairs. If there are no longer any humans on board, then today’s ships will break down in no time.’ And that’s a major problem if you’re in the middle of the sea and there’s no port in sight. Hekkenberg’s most important research challenge therefore is how to completely revamp the ship and its engine room. ‘Much of what we base our ship designs on comes from regulations that aim to protect people’s lives, and moreover we have great confidence in human beings to perform all kinds of tasks, varying from maintenance and navigation to throwing out a rope, answering the radio and fending off pirates. A ship without a crew would be a very different animal, because things like the wheelhouse and the lifeboats will be superfluous. In short, we haven’t had to give such fundamental thought to ships since we moved from wooden sailing vessels to steel steamships. The notion of autonomous boats is completely altering our design framework. We’re essentially witnessing a major system change.’ 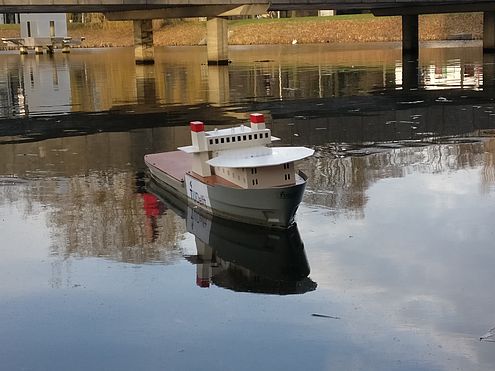 The Delft University of Technology is at the forefront in that respect, together with the Scandinavians. TU Delft is the frontrunner in the Netherlands and works closely with the entire shipbuilding world, including the research institutes Marin and TNO, shipping companies, pilots, people who guide ships in the port, companies that establish technical demands on ships, major shipbuilders, equipment suppliers, ministries and industry associations. In order to study how ships can communicate with the greater transport process, the Delft University of Technology is working primarily with logistical planners such as operators of container terminals, ports and inland vessels.

Nonetheless, autonomous boats are not only an engineering challenge for the Delft scientists, as there are also legal and financial obstacles that need to be overcome. ‘To enable a ship to look around itself, you can use standard radar equipment. It will see a great deal, but far from everything. You can also use military radar, which costs ten times as much but sees everything,’ Negenborn says ‘How are we going to derive benefits from autonomous boats and simultaneously develop a good business case?’

But hold on, what’s going to happen with all of those sailors once they’re stuck onshore? Are they all going to be fired? ‘Lower-skilled workers will probably gradually lose their jobs, but at the same time the number of jobs in the maritime sector has doubled in recent years. This number will continue to rise because global trading is rising, and that means that the number of ships needed will increase as well. Since these ships are becoming increasingly autonomous, new positions will be created in production, Hekkenberg says. That means that not only the captain but also the sailor will be setting foot onshore in 2030.

“In short, we haven’t had to give such fundamental thought to ships since we moved from wooden sailing vessels to steel steamships. The notion of autonomous boats is completely altering our design framework. We’re essentially witnessing a major system change”

"The major advantage of unmanned boats is that it reduces the cost of transporting cargo by forty per cent. ‘As a result, cargo will be transported more often by ship than by car.' "